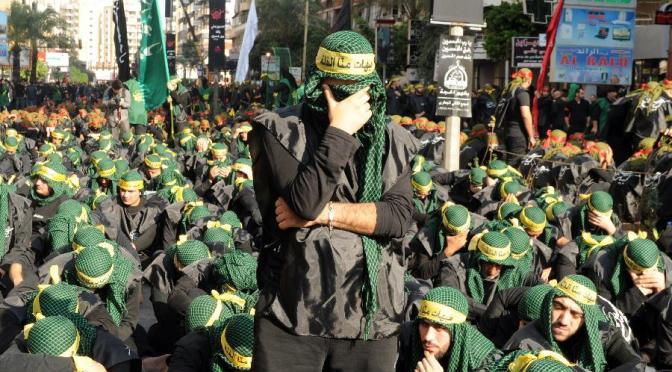 As hundreds of thousands of Shia Muslims converged onto Beirut’s southern suburbs in Lebanon, the Ashoura procession also turned into a massive show of support for Hezbollah.

Dressed in black from head to toe, hundreds of thousands of mourners filled the streets of the southern suburbs of Beirut, to commemorate the martyrdom of Imam Hussein.

Men, women and children sat on the pavement, with their heads buried in their hands as they rocked to the chants of the Sheikh, who recited the story of Imam Hussein’s martyrdom through loudspeakers.

One mourner said, “We are here today to express our deepest condolences to the 12th Imam. Imam Hussein sacrificed his soul for the sake of Islam, and we are willing to do the same.

Another mourner added, “As you see I have my son on my shoulders. I want him to be inspired by Hussein and learn from his school.”

Rivers of people amassed on Beirut’s southern suburbs, punching their fists in the air and beating their chests as they chanted, “We serve you Hussein”.

A Muslim Sheikh explained, “Such rallies must continue forever, it is very important that Imam Hussein and his sacrifices are always remembered throughout all generations.”

It was also a demonstration of support for Lebanon’s resistance group Hezbollah, as supporters marched carrying red, yellow and black banners with the slogan “We will not be humiliated”.

An Ashoura participant shared his own inspiration, “We are inspired from what Imam Hussein said in Karbala 1400 years, when he stood and addressed the tyrants, refusing to bow down & today we say to them, the Takfiri’s, we will not bow down.”

A woman attendee declared, “I woke up at 5 a.m. to participate in this Ashoura rally. I come to this rally every year, and I will keep attending such rallies until the last day of my life.”

Another female added, “We are inspired by the sister of Imam Hussein, Sayyeda Zeinab, who stood in the face of the tyrant Yazid. Therefore we have a responsibly. We must spread public awareness by showing our strong participation in such rallies.”

This year’s ceremony comes on the heels of the worst political and security crisis that Lebanon has seen in decades. However despite security threats, supporters of the resistance say they are not afraid to die in the manner of Imam Hussein.

A supporter stated, “We are not afraid to die protecting our beliefs in the path of Imam Hussein. We are not afraid of car bombs, rockets or any attack from Takfiri’s. We are the students of the school of the Grandson of the Prophet Mohammed.”

The annual Muharram ceremonies, which have been performed for many centuries, symbolize the eternal and unwavering stance of truth against falsehood, and humanity’s struggle against injustice, tyranny and oppression, the cause for which Imam Hussein was martyred.