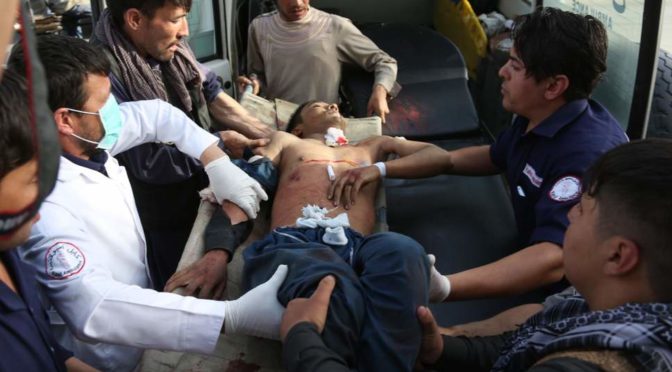 But when a Takfiri terrorist walks into a classroom of Mawoud Academy–a Shi’a education center in the poor Kabul neighborhood of Dasht-e-Barchi–blows himself up, and slaughters nearly 50 young students taking extra lessons to prepare for their university entrance exams just a few weeks away… You shrivel up into specks of dust in a sandstorm and fade into the background. People who represented the future of Afghanistan ripped to shreds and thrown into a cocktail of building debris, body parts and bomb fragments. Ambulance sirens screeching. At least 60 other innocents wounded and left to process the shock of the massacre from gurneys while medics tried to save their lives. Carnage mixed with even greater carnage. And the world? Can’t be bothered. We repeat: The duplicity, the selective humanity, the disconnectedness… Leaves us gobsmacked.

ISIS claimed responsibility for the suicide blast. This is the second atrocity against Afghani Shi’a this month. On August 3rd, Daeshis disguised as burqa-rocking women ran up in a Shi’a masjid in the Paktia city of Gardez and blew themselves up. Then several other Takfiris emerged post-explosion and began shooting anyone who survived. At least 48 worshipers, who were at the mosque for Jummah, were murdered in cold blood. Over 70 others were hurt. In the last 2 years, there have been 13 attacks on Shi’a in the Afghani capital alone–ALONE! The Hazaras themselves make up at least 22% of Afghanistan’s population–they aren’t a small minority by any means. Factor in all the Pastun Shi’a and other ethnicities and you have perhaps a third of the Afghani citizenry from the Jaafari-Islamic school of thought.

There is a clear stratagem at work here to bully and brainwash Afghanistan’s Shi’at al-Ali into thinking that their ancestral lands aren’t safe and they should migrate to somewhere new–like Pakistan or Iran, both of which are dealing with crises of their own that were manufactured by Global Zionism. An influx of refugees would put even further economic burden on each respective state to the point of breakage. Moreover, the departure of so many people from such a major ethno-communal societal segment would severely disfigure Afghani sovereignty and trigger a fresh round of destabilization. As if the savage NATO occupation and ISIS’s terrorism weren’t enough. Figure out the stratagem I’m speaking of yet. No? Fine. I’ll spell it out for you: O-D-E-D-Y-I-N-O-N.

It’s well-known that the American ZOG is working hand-in-glove with ISIS in occupied Afghanistan. Russia has said it on multiple occasions. So have numerous Iranian officials, including Ayatollah Sayyed Ali Khamenei. The Imam of the Islamic Revolution said bluntly that Washington “transferred” ISIS to Afghani territory following defeats in Syria and Iraq as a plot “to justify the continuation of its presence in the region and to create security for the Zionist regime.” Even Hamid Karzai, the rotten collaborationist who sold his country into Zio-NATO slavery, admitted that ISIS came to be in his homeland because of the surveillance, military, political and intelligence support provided by his former masters.

And wherever the US is… ‘Israel’ is right there with it cracking the whip. The usurping Judaic entity played a pivotal and cancerous role in Operation Cyclone, backing the fake moujahideen full-stop. Mossad, which blew up the Twin Towers, is eyes-deep in the Afghani heroin trade. ‘Israeli’ intelligence operative Yosef A. Maiman, the point man for the TAPI pipeline, particularly from the Afghani side, has been drilling into Afghanistan’s enormous untapped natural gas reserves and vast mines of minerals. And mark it down that you read it here first: When Afghani security forces begin ramping up operations against Daesh and retaking territory from Zion’s Frankenstein, there will be caches on top of caches of military-grade ‘Israeli’ weaponry.

It’s painful to know that the Mawoud Academy Martyrs, tremendously bright young minds, had their lives violently ended solely because of the illegitimate Jewish regime’s hegemonic designs on the Islamicate and Eurasia. We owe it to them, their families, the rest of the Afghani Shi’a community and of course, ALL of Afghanistan’s people — regardless of sect or ethnic background — to spit this fact hard so it is internalized and intellectual, cultural and spiritual militancy can then arise from its essence. Like Iraq, Libya, Syria, Ukraine and Yemen, Afghanistan burns thanks to Zion. And so long as NATO occupies the Nation Where Empires Become Corpses, Zion will flourish–which means more destruction and precious lives lost. Call a thing a thing. Afghanistan’s a target of the Oded Yinon Plan. Give glory to the Heaven-bound youth with the truth about the schemes of the World Enemy. May their memory be as eternal as the land on which their innocent blood was spilled.