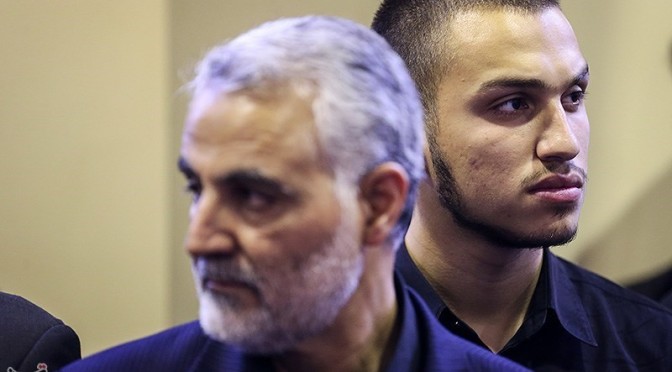 Chants of “Death to Israel!” and “Death to America!” punctuated the air and shots were fired as the coffin was carried through the street.

Jihad, the 26-year-old son of Hezbollah military commander Imad Mughniyeh, who was assassinated in Syria in 2008, was laid to rest on top of his father in the same grave.

The rest of the fighters were expected to be buried on Tuesday in their respective villages in southern Lebanon.

Jihad was seen as a rising star within the organisation, personally mentored by Iran’s Quds Force leader Qassem Soleimani. Jihad became well known in Iran last year, when news agencies published photographs of him standing behind Quds Force commander Qasem Soleimani during Soleimani’s mother’s funeral. According to reports, Soleimani was seen talking to Jihad during the funeral and introduced him to guests who arrived to pay their respects. Fars News reported that the relationship between Soleimani and Jihad was such that some people “assumed Jihad was Soleimani’s son.”

Many expected him to move up quickly and settle in a position similar to that of his slain father. Jihad Mughniyeh’s death is seen as a huge symbolic loss for Hezbollah.

Many are left speculating whether Hezbollah will launch retaliatory attacks against Israel. This is the first attack by Israel on high-level Hezbollah members inside Syria, demonstrating a clear escalation in tensions.

Ghassan Jawad, a political analyst close to the party, told Al Jazeera: “Hezbollah is unlikely to issue a reckless retaliation. Rather, it will be calculated and at the appropriate time.”

Bilal Farhat, a member of parliament for Hezbollah, told Al Jazeera the latest Israeli attacks are part of a continuous war conducted by Israel.

When asked about a possible Hezbollah retaliation, he answered: “Wait and see. Our message and our line will never stop.”

Meanwhile, friends of Jihad spoke of him fondly at the funeral, saying he was incredibly bright and respectful, and an exemplary student at university.

“He kept to himself, but was really very smart,” said one friend.

Farah, another friend from university, told Al Jazeera that “Jihad was a special person and it was too early for him to leave.”

On Sunday afternoon, Jihad Mughniyeh was killed along with five other Hezbollah fighters in a targeted air strike while they were on a field inspection in Quneitra in the Syrian Golan Heights, just a few hundred metres from the internationally recognised ceasefire line separating Syria from the Israeli-occupied Golan Heights.

Among those killed was Mohammad Issa, known as Abu Issa, the only one officially identified by Hezbollah as a commander.

He is said to have joined the party at the age of 15 and was considered a top-level commander who headed the group’s operations in the Golan.

Iran confirmed on Monday that a general of its elite Revolutionary Guards also died in the air strike.

“General Mohammad Ali Allahdadi and a number of fighters and Islamic Resistance [Hezbollah] forces were attacked by the Zionist regime’s helicopters,” said a statement on the Guards’ website.

“This brave general and some members of Hezbollah were martyred,” it said, adding that Allahdadi was in Syria “as an adviser helping the Syrian government to confront takfiri Salafist [Sunni extremist] terrorists”.

Iran is Syrian President Bashar al-Assad’s main regional ally in his war against the Takfiri rebels seeking to overthrow him.

For its part, Israel has neither confirmed nor denied the strike.

Speaking on Monday, Benjamin Netanyahu, Israeli prime minister, said: “Israel is adamant that it will have the right to defend itself against all those who wish to propagate terror and other attacks against its citizens, against its territory.”

He did not mention Lebanon or Syria specifically.

On Monday, the Syrian information minister said the air strike “was not a single act, but a continuation of the Israeli support to armed terrorist groups that are listed internationally as terrorist organisations”, according to a report published by Syrian state agency SANA.

The assassinations come just days after Hassan Nasrallah, the Hezbollah chief, warned Israel against committing any attacks inside Syria and Lebanon, adding that the party has the military capability to hit any area inside Israel.

Hezbollah has been fighting inside Syria alongside the Syrian army since 2013.

Nasrallah denied that its participation in Syria has left the party weakened, saying it has made the organisation stronger and more prepared for any battle with Israel in the future.