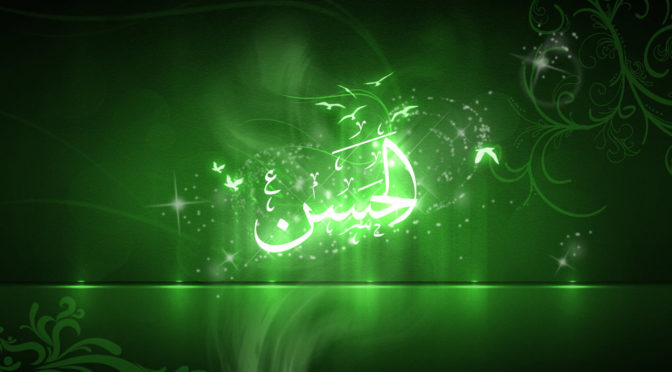 Happy, happy birthday to Imam Hassan al-Mujtaba (A.S.), the Will of the Ummah, the second Imam of we Shi’a and one of the two Chiefs of the Youth of Paradise beloved by all Muslims. Too often we neglect the contributions of Imam Hassan (A.S.) to Shi’a thought and Islamic Liberation Theology more generally. Even though he had every right, both Qur’anically and politically, to fight the despotic usurper Muawiyah for his treachery, his oppression, his disconnection from our Deen and unspeakable crimes against the Holy Prophet Muhammad’s (S.A.W.W.) sanctified Household (A.S.), he decided to put forth a Peace Treaty instead and spare Muslims anymore bloodshed and destabilization. He exercised Strategic Patience or better still, what Ayatollah Sayyed Ali Khamenei calls Heroic Flexibility, i.e. making decisions in the face of all odds to resist tyranny but nevertheless still seeking resolutions without reaching for one’s (proverbial) sword. Indeed, in the most difficult of circumstances, it is Heroic Flexibility/Strategic Patience that requires an even deeper Mouqawamah Consciousness and an even more ironclad steadfastness. Truly, there is nobody in the history of Islam after the Holy Prophet Muhammad (S.A.W.W.) himself that has more resolve, courage and patience than Imam Hassan (A.S.) Lest we forget that Imam Hussein (A.S.) followed his brother’s lead in the latter’s attempts to facilitate salaam. And lest we also forget that Imam Hassan (A.S.) still died the dignified and dauntless death of a hero like his father before him and his brother after him, achieving martyrdom after being poisoned by the accursed tyrant Muawiyah.

The example of Imam Hassan (A.S.) is that which we must follow in these trying times where the usurping Zionist entity and its Western ZOGs attempt to foment conflict between the Islamic Republic of Iran and the GCC. Despite the fact that all the Khaleeji-Wahhabi dictatorships are illegitimate colonialist constructs and deserve destruction, conflict fomented by Empire Judaica will benefit nobody but the enemies of Islam and nothing but the agenda of these very enemies. You can see Imam Hassan’s (A.S.) path walked upon by the Syrian government as it applies reconciliation agreements across the battlefields of the Damascus and Homs countrysides. And peace is what we should seek EVERYWHERE before World Zionism burns the entirety of the Ummah to the ground. It’s what Imam Hassan al-Mujtaba (A.S.) would have wanted, encouraged and strove for if he was with us physically today. Let there be no doubt.