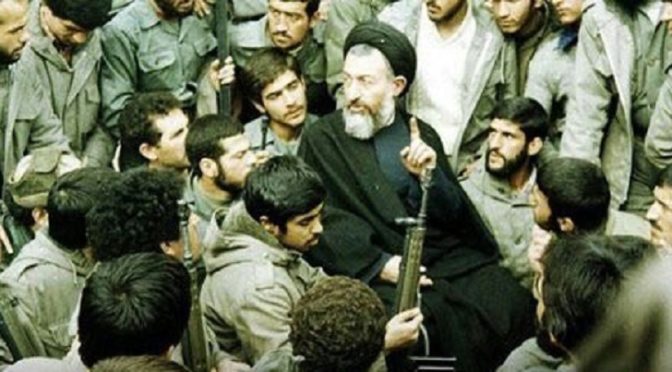 The Holy Prophet Muhammad (S.A.W.W.) had Imam Ali (A.S.) And Imam Ali (A.S.) had Malik al-Ashtar (R.A.) Imam Jaafar al-Sadiq (A.S.) had Haroun al-Makki (R.A.) Sayyed Hassan Nasrallah had Hajj Imad Mughniyeh (R.A.) Sayyed Abdul Malik al-Houthi had Saleh al-Sammad (R.A.) And Imam Ruhollah Khomeini (R.A.) had Ayatollah Dr. Sayyed Muhammad Hosseini Beheshti (R.A.)–a revolutionary personality who was so utterly towering that he dwarfed (and still dwarfs) all the world’s giant sequoias, skyscrapers and mountain apexes combined. Born on October 24th, 1928 in Isfahan, he would’ve been 90 years old today. “Would’ve been” being the key words as US-‘Israeli’-backed terrorist thugs from the MEK assassinated him along with 72 others–truly Karbala-esque, subhan’ALLAH–when they detonated a bomb at the newly minted headquarters of the Islamic Republic Party on June 28th, 1981.

Imam Khomeini (R.A.) said of his right-hand man and dearest, most beloved comrade, “Beheshti was himself an Ummah for our Ummah”, and also noted that he “lived and died as an oppressed man and he was a like a thorn in the eyes of the enemies of Islam.” The Imam of the Islamic Revolution cried like Imam Zayn al-Abideen (A.S.) after Ashoura for the loss of a man who would’ve (and did) walk through fire for him and could accurately be called his reflection. Despite severe pushback from the American ZOG and numerous European states to avoid a “crack down”, with threats of psych warfare and sanctions, Sayyed Ruhollah went forth with his campaign against the MEK infiltrators across Iran and his retribution was Mukhtari in its scope, eliminating and arresting thousands of them for their murderous terror. It did not mend the jaggedness he felt in his heart for his friend however and he declared that Dr. Beheshti’s martyrdom anniversary be observed as a commemoration every year from here on out.

Much can be said about the immensity of the Incandescence of Isfahan’s intellect and the immeasurable lengths he went to regionwide as well as worldwide to uphold the Islamic Revolution. He spoke half a dozen languages fluently and established outposts of Khomeiniist thought in Germany, Jordan, Lebanon, Iraq, Turkey and France. Even more can be said about his scholarship, with countless books, pamphlets and lectures to his name. He was a fiqh giant–of that, there isn’t any doubt. Beheshti was also a champion of cultural counter-hegemony, reiterating often that the Holy Qur’an must be the backbone of any such activity. It was his love and nearly-unmatched knowledge of ALLAH’s (SWT) Perfect Book that led the tyrannical Shah’s accursed SAVAK apparatus to detain the Ayatollah, imprison him and torture him. His “crime” was overseeing Q&A sessions related to the Qur’an every Saturday. The hatred of Islam and its beacons, Beheshti in particular, by the decadent Pahlavi regime couldn’t be stauncher and it was such oppression that expedited its demise indeed–something Beheshti prognosticated would occur.

Most notably, he maintained a fierce and outspoken opposition to both Zionist sides of the Cold War. He scripted and spoke with ruthless precision against Marxism. Only his fellow Iranian revolutionary and martyr Dr. Ali Shariati (R.A.) as well as his contemporary Ayatollah Sayyed Muhammad Baqir al-Sadr (R.A.) were in the same wheelhouse. Dr. Beheshti said that the history of Marxist thought and praxis vis-a-vis the Islamicate over the last century had been one of betrayal and regression. He had no love for general liberalism either, decrying it as godless and selfish, arrogant and exclusivist. In this regard, he asserted that man’s true destiny was in worship of the One God and in full pursuit of establishing justice on Earth to make way for Imam az-Zaman (A.S.) and Isa al-Masih (A.S.) Only spiritual excellence could truly satiate the appetite of man and woman to be good; to be better; to reach their Divinely-mandated potential and purpose.

Perhaps it was the Great Satan that Beheshti’s most vociferous and powerful barbs were directed towards. Contrary to what the fitnah-causing hasbara in the Zionist media would have you believe, Beheshti wasn’t a “moderate” nor “Western-sympathetic”. He was as anti-Zio-Imperialist as anti-Zio-Imperialist gets and he had a penchant for bridging divides among Iran’s various political factions–even those whose ideologies he had been philosophically disassembling for years, i.e. the communists and the centrist-liberals–in the name of strengthening the struggle against the United Snakes of IsraHELL. This passion and push for unity infuriated American intelligence officials, who would go on to refer to him as the “Cunning Fox” because every time that they thought one of their seditious plots was going to come to fruition, he’d foil them.

A little-known fact is that Beheshti didn’t found the Association of Militant Ulema solely to consolidate revolutionary ranks but to throw as many monkey wrenches as possible into the US-Zionist machinery spinning internationally to roll back the Islamic Revolution. To think today that this organization with such righteous origins is now used as a tool by the likes of Rouhani, Khatami, Mousavi and others to undermine Islam is an insult to Beheshti’s legacy and sacrifice. Returning to the matter at hand though, Mossadniks and CIA agents could never pinpoint his location. That’s why the decision was taken to remove him in such a gargantuan, public manner. World Arrogance couldn’t outsmart him so it had to devil him; it had to Jew him; it had to slaughter him. But his body doesn’t represent his roots. His works do. And in this regard, cutting him down has only made him grow stronger and bigger, eclipsing the artificial canopies of Zion’s Imperium.

One quote, seen on billboards and posters throughout the Iranian capital of Tehran comes to mind when we think of his defiance and courage, “Be enraged at us America, it’s okay! And die of your rage while you’re at it!” Dr. Beheshti’s point was that revolutionaries, strugglers, Mouqawamists, cadres and other individuals who seek to lay waste to the Halakhic-Talmudic system of Dajjal should never give one iota of a damn about what our oppressors think of us. We must be unapologetic at all costs. If the Empire and its marionettes are angry about your political stances, it means you’re doing something right. If the ruling “elites”–read: the Jewish Power Configuration–are experiencing “hurt feelings” over your words, your songs, your paintings, your writings, your comedy sketches, your photography or your poems, perform your art louder. Capitulation is never an option. Ayatollah Dr. Sayyed Muhammad Hosseini Beheshti (R.A.), a man who exuded reason, faith, revolutionary zeal and Islamic light, died with zero knowledge of the concept of surrender. On his 90th birthday, we should honor that principle and send him proper wishes by continuing to promulgate his message of Muhammadi-Husseini Mouqawamism until our enemies collapse from burning, all-consuming rage. A concluding note is that Mohammad-Reza Kolahi, the sadistic MEK terrorist who bought ice cream in celebration after pulling off the the Hafte Tir bombing that killed Dr. Beheshti (R.A.) and 72 others, was killed in the Netherlands ZOG–which had granted him asylum and is still very much involved in meddling in Iran’s affairs today–on December 15th, 2015. Shlomo-controlled corporate press outlets blame the Islamic Republic for the liquidation. Information on the Iranian side says differently… That MEK thug Kolahi, who was hiding out like a cowardly rodent under the alias “Ali Motamed”, was clipped by Mossad after it got wind of the IRGC discovering his location and attempting to turn him to reveal current ‘Israeli’ moves in play.

Either way, the point is, another MEK goon bit the dust and didn’t amount to much but a rain drop in a river the size of a galaxy, nor will he ever be anything more than a greasy, stained foot note somewhere in the “toasted and roasted collaborators” section of the history books. Ayatollah Dr. Sayyed Muhammad Hosseini Beheshti (R.A.) on the other hand is alive in the militant beating hearts of millions of Iranians and Islamic Liberationists in all four corners of God’s Green Earth. No death. Verily, the Shouhada only know life. 90 combative, martyrdom-loving years young. Here’s to 9,990 more. Long live the Islamic Revolution. Labaykah ya Beheshti!