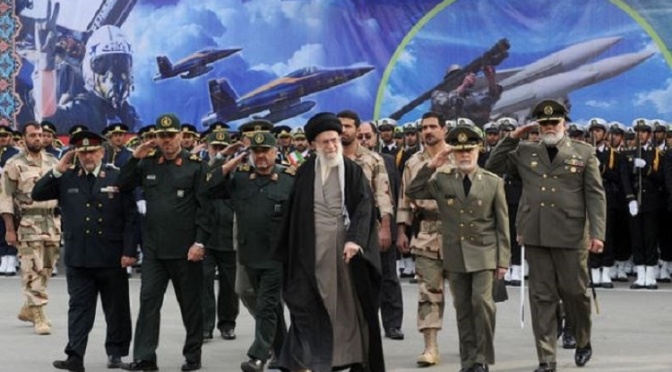 Labaykah ya Khamenei! The most wonderful, most peaceful and happiest of happy birthdays to the Supreme Leader of the Islamic Revolution, the Living Martyr, the reflection of Imam Khomeini (R.A.), vicegerent of Imam al-Qa’im (A.S.), the Pearl-Guide of Mouqawamists worldwide, the globe’s foremost Anti-Parasitic thinker, the commander of the Islamic Revolutionary Guard Corps (IRGC), the Overseer of Regional Resistance, the Guardian of the Palestinian cause and the Muhammadi-Husseini Saint who literally wrote the book – several of them, actually – on how NOT to capitulate to the US-‘Israeli’ Imperium on any level. If you don’t recognize the luminosity of his Nour, you must be blind. If you aren’t moved by the thunder of his voice, you must be deaf. If you can’t speak highly  and in awe of him, you must be dumb. And if you can’t comprehend why we put our fists over our hearts and resolutely declare, “Sayyed Ali Hosseini Khamenei, we are at your service and forever will be”, then you’re just not paying any attention whatsoever. We’d sacrifice our lives for the Imam because he has sacrificed everything for us. And now at 79, the Islamic Republic of Iran’s heart and soul still moves with the smile and fire of his youth.

It should’ve been over for the Shi’a Islamic Liberationist luminary on June 27th, 1981. The treacherous, collaborationist, pseudo-Marxist death-cult known as the MEK had one of its agents place a bomb inside a tape recorder that was delivered to the Abou Zar Mosque where Khamenei was set to speak that day and it was then put on the desk in front of him. The mysterious mailman then walked away and the device exploded, nearly killing the Imam and severely injuring his right arm, his vocal chords and his lungs. While his vocal chords and lungs recovered, his right arm did not, and to this day he has lost permanent use of it. Death was not in the cards for the Lion of Holy Mashhad however. No, ALLAH (SWT) had other plans for him. And his body of work following this Divinely-mandated miracle has only been that of victory on top of victory. He would become one of the top Iranian commanders during the Imposed War, preventing the Islamic Revolution from being crushed by US-UK-Soviet-Saudi-‘Israeli’-backed Saddam Hussein. After taking over the mantle of Imam Khomeini (R.A.), he’d defy US-UN, AIPAC-driven sanctions and guide Iran through the turbulence of the 90s. During this time, he also granted safe haven to legendary Yemeni moujahid Sayyed Hussein Badreddine al-Houthi (R.A.) and his father (R.A.), welcoming them with open arms and paving the way for the eventual birth of Ansarullah. He guided Lebanon’s Hizbullah to a historic triumph in 2000 and then once more in 2006. He also guided the Palestinian Resistance to the liberation of Gaza in 2005. He helped Iraq prevail over the US occupation and then the Zio-American-spawned terrorism of ISIS. And through his unwavering commitment to the Syrian Arab Republic, we are on the verge of witnessing complete victory in Bilad al-Sham today.

It is impossible to even fathom how our region and in truth, the world as a whole would look today if it wasn’t for Imam Khamenei. He has obliterated the two standing pillars of World Zionism’s hegemonic discourse, i.e. the official 9/11 story and the Holofraud, and is the architect of the international truth conferences in Tehran about WW2, the September 11th false flag and Hollywoodism. As the only leader at the state level and highest religious authority to do so, he has inspired Muslims and truth-seekers wherever they may be to stand up for haqq regardless of what is flung back their way by lying hasbara operatives. Military revolution. Spiritual revolution. Cultural revolution. Intellectual revolution. And soon, the FINAL revolution that throws ‘Israel’ into history’s waste-basket and liquidates the Rothschild Octopus. All at the direction of Imam Khamenei. May he live to see his famous words about ‘Israel’ not making it another two decades come to fruition. In fact… May he outlive us all so our seeds and their seeds can have the honor of basking in his wisdom and Mouqawamist gemstones. Ya Rahbar! Light of Ahmad (S.A.W.W.) and Al-Karrar (A.S.)! The human embodiment of Zulfiqar! Happy 79th birthday once again!