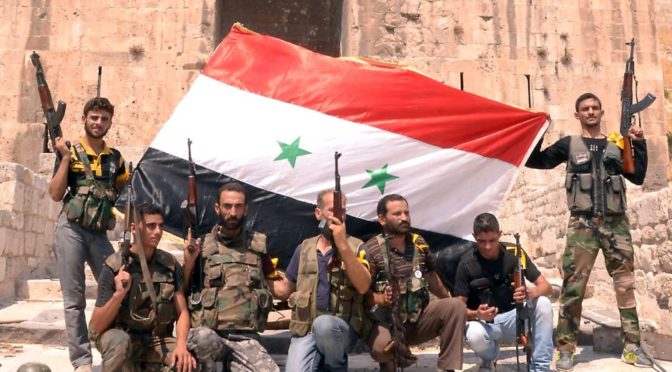 For 73 years, Syria’s guardians have stood on the last frontiers resisting the US-‘Israeli’ Empire. Resolutely and valiantly fighting the Jewish terrorists during the Nakba of ’48 and the Naksa of ’67. Only a razor’s edge away from defeating ‘Israel’ and regaining the Golan Heights in the ’73 War of Liberation before they were betrayed by Anwar Sadat the ‘Ammo Habib and his traitorous Egyptian regime. Prevailers over the “Muslim” Brotherhood in the vicious 4th Generation War orchestrated by Washington, “Tel Aviv”, Amman, Riyadh and Saddam Hussein from ’76 to ’82. Preventers of the fall of Beirut and crushers of the Zionist entity’s Operation Oranim as they gave over 1,500 martyrs in defense of Lebanon’s capital and people after the second invasion by the artificial Jewish “state”. Brothers and backers of the Lebanese Islamic Resistance of Hizbullah who contributed to its world-shattering victories over ‘Israel’ in ’00 and ’06. Integral cogs in the Resistance Axis Anti-Machine that has trained, financed, backed and smuggled weapons to the Palestinian Resistance since Imam Khomeini’s (R.A.) Islamic Revolution toppled the US-UK-‘Israeli’-owned Shah in Iran–General Muhammad Suleiman (R.A.) and Deputy Defense Minister Assef Shawkat (R.A.) were martyred in recent years by cowardly Zionist assassins for this very reason. Heroes. Warriors. Protectors of Arab identity and the Palestinian cause.

Liberators of Syria from French colonialism yesterday. Liberators of Syria from Takfiri occupation today. Liberators of Syria’s Golan Heights tomorrow! And 1/8 of the Mouqawamah Bloc Houriyeh Force – alongside the IRGC, Hizbullah, Ansarullah, the Iraqi Islamic Resistance, Pakistan’s Zaynabyoun, Afghanistan’s Fatemiyoun and of course the Palestinian people themselves – that will soon drive out the Zionist usurpers from every inch of historic Palestine. Syria’s flag will one day fly high in a free Al-Quds because of these men of men. These soldiers of soldiers. These undeterred battlefield giants. Happy birthday once more – and a thousand more – to the Syrian Arab Army!