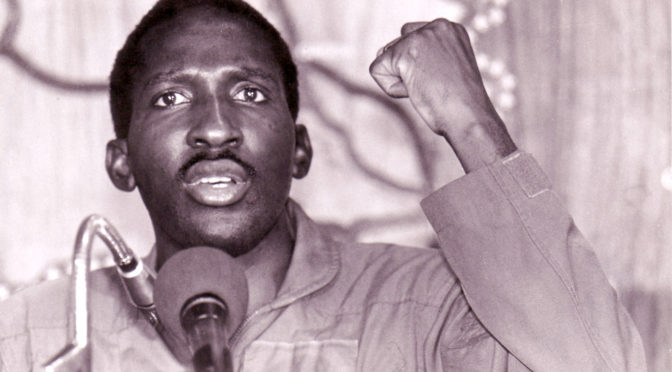 Happy, happy birthday to Thomas Isidore Noël Sankara, the revolutionary godfather of Burkina Faso. Africa’s Che Guevara would’ve been 67 today and there is a deep sense of melancholy knowing that he was martyred at the tender age of 36. One of the world’s least known but nevertheless most historically important revolutionaries, Sankara came to power in 1983 after spearheading a masterful Anti-Imperialist coup. From the moment he took the reins, he began to implement radical changes that affected countless lives for the better in a nation ravaged by decades of French colonialism. From anti-capitalist land reform to the immediate implementation of total women’s rights, Cuban-style literacy promotion to education, a declaration of war on famine to resource nationalization, the removal of colonialist structures to national, public, free health care, rejection of neoliberalism to the punishment of collaborators and colonialists, Pan-Africanism to staunch Anti-Zionism, the incorruptible Burkinabé firebrand was like a shooting star in the solidification of all these policies. Never before in the post-colonial era on the African continent had such revolutionary shifts occurred in such a short period of time.

What is even less known about Sankara is that there was a leading ‘Israeli’ hand in deposing him. Blaise Compaoré, who led the ouster and subsequent killing of Sankara on October 15th, 1987, had been a Mossad asset for some time (through the Raoul Wallenberg Foundation) and while French and American intelligence also played major roles in the criminal overthrow of the revolutionary Burkinabé government, it was ‘Israel’ which gained the most from Sankara’s demise. Burkina Faso is now considered one of the usurping Zionist entity’s closest allies in all of Africa and ‘Israeli’ regime mining corporations, as well as more than a few transnational Zionist billionaires, have extended their tentacles deep into the rich soil of the Burkinabé people, extracting everything from salt–for the massive global “kosher” salt market–to marble to gold. These same devilish Jewish “state” conglomerates have also turned Burkina Faso, which produces no diamonds, into a haven for the illegal blood diamond trade. While Compaoré is now gone after fleeing Burkina Faso to Côte d’Ivoire in 2014, the repressive neo-colonial order remains. Compaoré was taunted by youth holding Sankara’s photo during calls for his overthrow, but the generals who took his place are far from better. With the US and French ZOGs still meddling in the tiny landlocked West African nation’s affairs, a return to militant, pluralistic, Anti-Zionist Sankaraism seems ever-elusive.

But there is still hope and so shall there always be! For Thomas Isidore Noël Sankara famously said, “While revolutionaries as individuals can be murdered, you cannot kill ideas.” And there are no ideas which are as illuminating as his. Sankara also declared, “We must dare to invent the future.” And in his memory, this is what all of us must do in solidarity with the ongoing struggle of the Burkinabé people and the African continent as a whole. Let us fight for a future without the Zionist-designed, American-run AFRICOM; a future without French neo-colonialism; a future without Western-backed dictators; a future without the parasitism of Big Pharma and Big Oil; a future without Saudi-funded Wahhabism; and a future without ‘Israel’. This is the kind of future Sankara dared to invent from 1983-1987. It’s the future that he would want. And it is what all of us must claw tooth and nail to bring to fruition. It is in fact our duty to do so. Happy birthday again Thomas. You are terribly, terribly missed. #LongLiveSankara #LongLiveThe1983BurkinabéRevolution