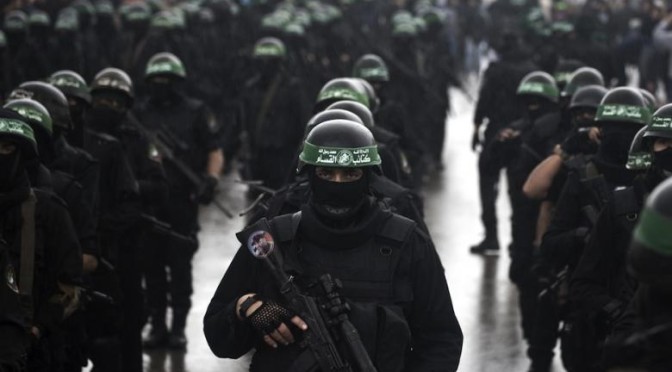 During a military parade organized by the movement in the Gaza Strip on the occasion of the twenty-seventh anniversary of Hamas’ foundation on Sunday, Ezzedine al-Qassam Brigades spokesman Abu Obeida said that the Israeli entity is on the brink of extinction and collapse due to the resistance and sacrifices of the martyrs.

He said that another conflict might be inevitable unless tens of thousands of Gazan homes that were destroyed in the last Israeli aggression are rebuilt. The 50 days of war killed 2,100 Palestinians, most of them civilians. “We will accept no less than the rebuilding of everything that was destroyed by the savage Zionist aggression,” Obeida said.

Abu Obeida thanked all those supporting the resistance on top of which the Islamic Republic in Iran. He praised Iran for providing “financial and military” assistance to Hamas.

He also thanked Qatar and Turkey for “supporting [Gaza’s] people and the Palestinian cause.”

Hamas paraded 2,000 of its armed fighters and truck-mounted rockets through Gaza, vowing to destroy the Zionist entity.

In the parade, trucks carrying three long-range rockets and other vehicles with multiple rocket launchers drove by, while a drone with Hamas markings sat on a flatbed truck. Another Hamas drone and an Israeli aircraft flew simultaneously overhead.

One of Hamas’ founding leaders, Khalil al-Hayya, reaffirmed the resistance movement’s founding charter, which is the destruction of Israel. “This illusion called Israel will be removed. It will be removed at the hands of the Qassam Brigades,” he said, referring to the armed wing of Hamas.