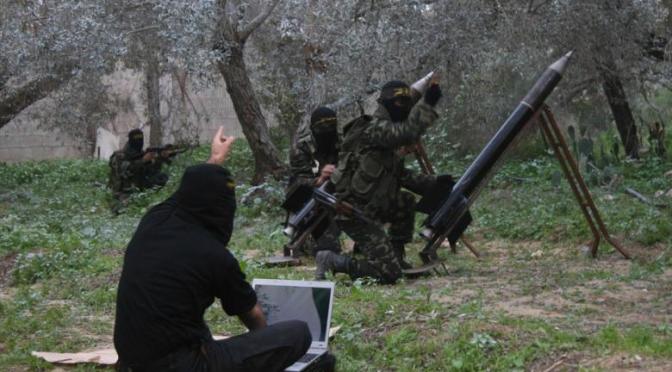 Necessity is the mother of invention. The Resistance has recently demonstrated its biggest achievements yet in the fight with Israel. Indeed, it is not an exaggeration to say that Gaza, and behind it Iran, Syria, and Hezbollah, had anticipated the day when the borders and the sea surrounding Gaza would be sealed off. Today, Egypt and Israel are stepping up their coordination to make the sea off limits to the resistance, while in the south, their armies are working to establish a buffer zone and even a water trench, in the hope of putting an end to the smuggling of rockets from the Iranian desert to the Mediterranean.

“Lift your feet, we have been and will remain under them, at your service,” said Abu Ali, a commander in the Iranian Revolutionary Guards (IRGC), in broken Arabic to a resistance fighter from Gaza who was attending a training session in Iran in 2012. This was in response to criticisms voiced against the Iranians for not having transferred rocket-making technology to Gaza prior to the Israeli assault in 2008. Abu Jihad, the Gazan fighter, had asked his instructor, “Where were you in the first war (Operation Cast Lead)?”

Cars would wait for them on the tarmac and then take them to the factions to which they were affiliated. A prominent Palestinian leader says, “If their trips were scheduled on the same day, they would change planes without being asked about visas or passports.”

In Tehran, the resistance fighters attended intensive training sessions. Over the many months they spent there, they gained invaluable skills, starting with on-hands application of theories, to testing weapons and tactics in environments simulating the geography in Gaza. For instance, they were taken on board Iranian HESA Shahed helicopters to inspect the sites where the rockets fell, to examine their accuracy and effectiveness, according to Abu Jihad.

The resistance fighters transferred their experience to Gaza, where they helped manufacture and develop rockets, and provide training on how to emplace and camouflage them to avoid the occupation’s eyes in the sky and on the ground. Yet the training did not come only from Iran, as fighters also underwent the same kind of training in Syria. There were also the occasional incidents. In one such incident, during training on hitting targets in the Syrian Desert, a rocket fell near a dormitory and wounded a number of soldiers.

With the end of 2001, al-Qassam Brigades, the military wing of the Islamic Resistance Movement Hamas, started manufacturing for the first time Qassam rockets. The rockets at the time had a range of no more than 15 km, and in many instances, rockets would fall near their launching pads, or even explode before their launch. These rockets mostly targeted the settlement of Sderot, which lies 4 kilometers from the eastern border of the Gaza Strip.

In those years, the resistance fighters did not have much experience in manufacturing weapons, not to mention the difficulty of procuring the needed raw materials. But since 2005, following the withdrawal of the Israeli enemy from the Philadelphia Corridor, the resistance breathed a sigh of relief. The southern border with Egypt was now open to the resistance fighters, creating better conditions for smuggling in weapons and raw materials through tunnels to manufacture rockets. Since that year and until 2012, Iran and Hezbollah sought to help develop the rockets of the Palestinian resistance to reach longer ranges. A new stage began in which fighters from Gaza flocked to Lebanon, and collaborated with the resistance there to bring in more weapons and military equipment.

A new stage began in which fighters from Gaza flocked to Lebanon, and collaborated with the resistance there to bring in more weapons and military equipment.

The common belief that boats snuck to the shore is inaccurate. Rather, weapons would be dropped in certain points in the sea very far from the shore. Water currents washed them off on the shore, to be retrieved by divers at night. Another notable smuggling route went through Sudan, Egypt, the Sinai, and then Gaza via tunnels, according to one prominent Hamas official.

Later on, the Iranians realized the logistical obstacle facing the resistance in smuggling in weapons, namely, the difficulty of bringing in large rockets through the tunnels. Subsequently, the IRGC sought to develop Fajr-5 rockets that could be disassembled and then reassembled in Palestine.

The first Fajr-5 rockets arrived in Gaza in 2011, and were used for the first time in Operation Pillar of Cloud in 2012, when the Palestinian resistance bombed Tel Aviv for the first time. At the time, Israel accused the IRGC of supplying rockets to the resistance. The commander of the IRGC Mohammad Ali Jafari responded by confirming the transfer of Fajr rockets to the resistance, and added that he would be seeking to supply them with other rocket systems.

Fajr was one of the weapons that had a great impact on the work of the resistance. But there was a limit to the amount this type of rocketry the resistance could smuggle in. In this regard, Abu Jihad said that the concern over bringing in limited amounts of weapons, in addition to the possibility of security deterioration and the tightening of the blockade in a way that would prevent the entry of weapons into Gaza, were all issues on the mind of IRGC officials during the training. Abu Jihad said the trainers developed special courses on manufacturing rockets, after the Iranians gathered a lot of information on the raw materials available in Gaza and in its vicinity. Abu Jihad said, “So we made rockets ourselves in Iran, using materials similar to those available in Gaza, and we verified their effectiveness.”

The ‘golden era’ of Hosni Mubarak

Leading sources in Islamic Jihad said that the majority of weapons that arrived in Gaza and used in the battles of 2012 and 2014 had come through during Hosni Mubarak’s term, especially in 2011 and the years that followed. The sources added that in those years, the authorities in Egypt turned a blind eye to smuggling in Sinai, which was done with the help of tribes there in return for huge sums of money.

In this regard, a Hamas official said that the resistance would agree with Egyptian officers to allocate a specified number of days in which the resistance fighters would smuggle weapons freely. Then under President Mohammed Morsi, in whose term the eight-day conflict (Pillar of Cloud) took place and the Fajr rocket was deployed for the first, the resistance stockpiled a fair amount of rockets and hardware. However, Palestinian sources stress that smuggling weapons under Morsi was more difficult than under Mubarak, though they say it was easier under him to move fighters out of Gaza for training. There were even reports that the deposed president had issued special cards to facilitate the movement of people out of Gaza without harassment from the security services.

After the war in 2012, the enemy learned the smuggling routes into Gaza, and targeted weapons convoys and rocket caches. In late 2012, the Israeli air force bombed a weapons convoy in Sudan, said to be on its way to Gaza. At that point, the Iranians realized that the best option to supply rockets to the Palestinian resistance was to help manufacture them locally instead of smuggling them.

Accordingly, Tehran worked with Hezbollah to train Gazans on setting up plants to manufacture rockets, as one leader said. Operation Protective Edge in 2014 demonstrated the worth of months of training in Iran. The phrase “locally made” was used extensively in resistance statements during that conflict.

The Iranians did not deny that the rockets fired by the resistance were locally made. Assistant Foreign Minister of Iran, Hossein Amir Abdul-Lahian, said the IRGC had transferred rocket-making technology to the Palestinians.

Regarding drones, Islamic Jihad sources said that Iran had delivered three Ababil UAVs to the Qassam Brigades to carry out certain missions, but that these planes were downed as was declared.

Generally speaking, in the recent war, locally made rockets (e.g. Qassam and M75), which were available in abundant number, helped sustain the rate of rocket fire at the same level until the last day of the battle, while the Quds Brigades used the Buraq 70 and Buraq 100 rockets to bomb Tel Aviv and other cities.

[I]t was decided that these [locally made] rockets must carry a small explosive head, but must have a higher range, for both combat- and political-related calculations.

Clearly, the design and propulsion fuel for both types of rockets come from the same source. At that stage, there was a debate between the leaders of the resistance (Lebanese, Palestinian and Iranian) regarding the nature of locally made rockets, and it was decided that these rockets must carry a small explosive head, but must have a higher range, for both combat- and political-related calculations.

Leading figures in the Palestinian resistance explained the difference in cost between manufacturing rockets locally and smuggling them from Iran. They said, “Locally made rockets are almost as powerful as smuggled ones, but cost less. The cost of a rocket like the one used to bomb Tel Aviv does not exceed $5,000, while a smuggled rocket may cost up to $15,000.” Regarding short-range rockets, for example, the cost of a smuggled 107-type rocket is around $800, while the same rocket can be made locally for $110.

Despite the local manufacturing of rockets, smuggling has not come to a complete halt. What is successfully smuggled, whether via the sea or the Sinai desert, is not usually disclosed. Sources in Islamic Jihad say that currently, the reliance is on local manufacturing, “thanks to the presence of excellent raw materials at a good price in the markets.”

Certainly, the recent war is being assessed carefully by Iran, Hezbollah, and even Syria to learn what needs to be done, amid a large influx of financial support for the armed wings of the resistance after the war.