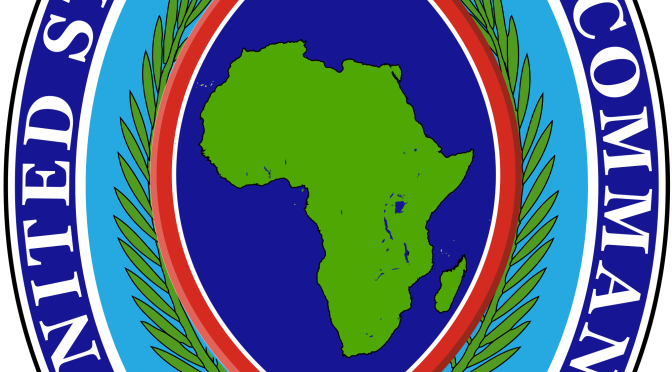 The greatest danger to Africa posed by U.S. Africa Command (AFRICOM) involves neither drones nor armed troops. It is instead the command’s sinister, cynical use of manipulative deception. With Houdini-like misdirection it opportunistically draws attention either to its military operations or to its purported humanitarian missions. All the while it is simultaneously engaged in low profile, seemingly harmless psychological operations that have the potential for long-term devastating effects on the African continent.

One of the most recent of these operations was a so-called “public affairs and media symposium” conducted for African journalists. This weeklong event attracted more than 60 participants who heard presentations on humanitarian aid, reporting on armed conflicts, social media, and how to interact with military public affairs offices.

AFRICOM’s website quoted a journalist from Togo as saying: “This is an opportunity for me as a director of the editorial staff of my journal to get closer with the Army to know their problems and understand their issues before I form my public opinion.”

General David Rodriguez, AFRICOM’s commander said the conference was part of the effort to build relationships with African countries. He said: “In the near term, we are working with multinational partners and interagency to address immediate challenges of violent extremism and regional instability including threats to both U.S. personnel and facilities.”

Of course, the quickest, easiest way to protect U.S. personnel and facilities is to simply remove them from Africa. It is, however an approach the U.S. will never choose for reasons identified decades ago by some who helped usher in Africa’s era of flag independence. In 1965, Kwame Nkrumah explained: “Africa’s raw materials are an important consideration in the military build-up of the NATO countries, in which are included those of the European Common Market. Their industries, especially the strategic and nuclear factories, depend largely upon the primary materials that come from the less developed countries.”

Nkrumah also identified the hand-in-glove relationship of the military and the media. He said: ”…the enormous monopoly press, together with the outflow of slick, clever, expensive magazines, attends to what it chooses to call ‘news.’ Within separate countries, one or two news agencies control the news handouts, so that a deadly uniformity is achieved, regardless of the number of separate newspapers or magazines; while internationally, the financial preponderance of the United States is felt more and more through its foreign correspondents and offices abroad, as well as through its influence over international capitalist journalism.”

“The quickest, easiest way to protect U.S. personnel and facilities is to simply remove them from Africa.”

The vital importance of media was recognized early on by western imperialism. Frantz Fanon, who was actively engaged in Algeria’s anti-colonial struggles during the 1950s noted that a radio program called “The Voice of Fighting Algeria” did much to enlighten and mobilize Algerians against French domination. Fanon explained: “The French authorities, however, began to realize the importance of this progress of the people in the technique of news dissemination. After a few months of hesitancy, legal measures appeared. The sale of radios was now prohibited, except on presentation of a voucher issued by the military security or police services. The sale of battery sets was absolutely prohibited, and spare batteries were practically withdrawn from the market.” Fanon went on to say: “The programs were then systematically jammed, and the Voice of Fighting Algeria soon became inaudible.” It is against this historical backdrop that African journalists participated in a symposium hosted by the U.S. military.

Obviously, AFRICOM is courting journalists and attempting to direct media coverage of U.S. military activities. From the outset, how AFRICOM is portrayed to the public has been of major concern to the Pentagon. At the time of its creation, AFRICOM was met with great skepticism globally, and it faced considerable opposition in Africa with only one African country indicating a willingness to allow establishment of AFRICOM’s headquarters on its soil. During the command’s infancy, AFRICOM’s then deputy for military operations Robert T. Moeller said there was a misconception that AFRICOM was part of “a U.S. effort to militarize Africa, and that’s definitely not the case.”

Notwithstanding AFRICOM’s claims of innocence, suspicion has dogged the command for the duration of its existence, and its public relations headaches are likely to increase. As people around the world proclaim “bring back our girls,” recent suggestions that the U.S. indirectly fueled the growth of Boko Haram will probably receive increasing attention. The U.S. played a significant role in arming forces that opposed Libyan leader Moammar Gadhafi. In 2012 Reuters reported that a United Nations investigation found evidence that many of these weapons, including “rocket-propelled grenades, machine guns, with anti-aircraft visors, automatic rifles, ammunition, grenades” and other weapons were smuggled out of Libya and found their way into the hands of al-Qaeda and its affiliates, including Boko Haram.

While AFRICOM’s logic and motives in trying to win the allegiance of African journalists are obvious, the thoughts and objectives of the symposium participants are an enigma. Presumably there are only two possible reasons why journalists would attend this conference. Either they were extremely naïve and honestly believed these sessions would aid their professional development; or, they have chosen to become conscious and willing propaganda agents. In either case, trouble looms for Africa with so-called “journalists” of this caliber generating information for the continent to consume.