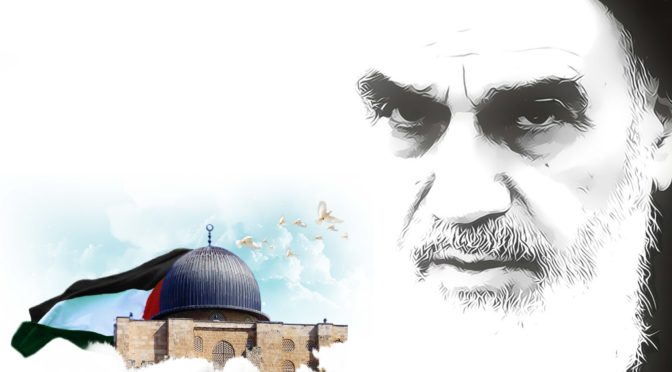 Khomeini (R.A.) was laying it out in no uncertain terms for all Muslims that the fight against World Zionism and the quest to restore Palestine is as important as any other Islamic pillar; he even told us, “If Muslims were united and each poured a single bucket of water on the Zionist entity, an unstoppable flood would wash it away.” Is there any doubting this?! Subhan’ALLAH! There is no GCC tyrant, no “Muslim” Brotherhood “cleric”, no so-called “leader” of any “Arab” government or regime, and damn sure no “Palestine Solidarity Movement” activist who has ever been bold enough to ideologically integrate Palestine’s liberation into the very everyday praxis of our religion. And who else but the spiritual sons of Imam Ruhollah (R.A.) who toppled a tyrant and made the Empire quiver is truly defending Falasteen with blood and sacrifices today? Who?!

Ayatollah Sayyed Ruhollah Khomeini (R.A.) said that the regime occupying Al-Quds would vanish from the pages of time. Ayatollah Sayyed Ali Khameni says that ‘Israel’ will cease to exist in two decades or less and that fighting for Palestine is a religious duty. Sayyed Hassan Nasrallah says that there is no choice for the usurping Zionist entity but death and he also promised that in the next war Hizbullah will enter Palestine and liberate Al-Jalil (the Galilee). Sayyed Abdul Malik al-Houthi declared that once Dönmeh Al-Saud is driven from Yemen permanently, his men are at Palestine’s service and ready to march into Al-Quds. Ayatollah Muhammad Baqir al-Sadr (R.A.) said that Palestine will only have justice when ‘Israel’ dies and this justice will certainly [there’s that Yaqin again] come because ALLAH (SWT) is the Most Just (Al-Adl). And Sheikh Ibrahim Yaqoub al-Zakzaky, Africa’s greatest champion of the Palestinian cause who remains illegally imprisoned by the tyrannical Zionist-collaborator Buhari regime, said that what is not yours is not yours, no matter how many years of oppression and hostage-taking, and the entity would slip someday along with those supporting it. The Sheikh further said that ‘Israel’ will fall with its allies certainly [Yaqin once more]. These men, these saintly, legendary, Husseini men of God, do not THINK that Palestine will be freed in totality, they KNOW it.

So on this 37th annual International Al-Quds Day, who shall we look to for guidance on the fate of Al-Quds and all of Palestine? Sayyed Ruhollah (R.A.) and the Lebanese, Iraqi, Yemeni, Nigerian, Syrian and Palestinian (Islamic Jihad) offspring of his history-shifting Islamic Revolution whose position is DTI (Death to ‘Israel’) and nothing but DTI? Or the “Palestine Solidarity Movement” activists who want to preserve the parasitic, putrefying presence of the Jewish supremacist scourge on every inch of Falasteeni land with a deceptive, destructive “one state solution” that puts Jewish comfort and sensitivity above Palestinian rights and justice for the Moustazafeen? The former is ’bout liberation and restoration; the latter is ’bout preservation, collaboration and capitulation. Difference ain’t hard to see and requires no elucidation.

Just like Khomeini (R.A.) said he’d slap the face of the Shah regime and anybody who said they wanted “peace” with the regime, I feel that anybody who wants “peace” with ‘Israelis’, no matter what kind of “end the occupation” poppycock they front with, also needs a slap in the face. And for Palestine, Lebanon, Syria, Iraq, Yemen, Nigeria and an entire world that is suffering because of the continued criminal existence of the Zionist tumor, maybe that’s exactly what these two-timers need; a right jab/straight left combination from the southpaw stance wouldn’t hurt either!

No “peace” with the settlers, be they Ashkenazi, Sephardic, Mizrahi, Ethiopian or otherwise. No justice until the Right of Return is implemented and the Talmudic-Halakhic tumor perishes with its illegal nuke program dismantled. No rest until we make this a reality and then set our sights on the rest of the Rothschild Octopus. Let’s not only THINK it; let’s not only HOPE for it; let’s walk in the path of the martyrs and their guide Ayatollah Sayyed Ruhollah Khomeini (R.A.), let’s embrace Yaqin, and let’s KNOW, in our bones, that the Palestinian people triumphing in total liberation is as inevitable as the sun rising in the east and setting in the west. Insha’ALLAH. #QudsDay2016 ‪#Ta7yaFalasteen‬ ‪#TotalLiberation #LongLiveKhomeini #DeathToIsrael‬ ‪#PalestineWillBeFree‬ ‪#FromTheRiverToTheSea‬

One thought on “For Quds Day 2016, Let Us Have Certainty (Yaqin) That Palestine Will Be Free!”