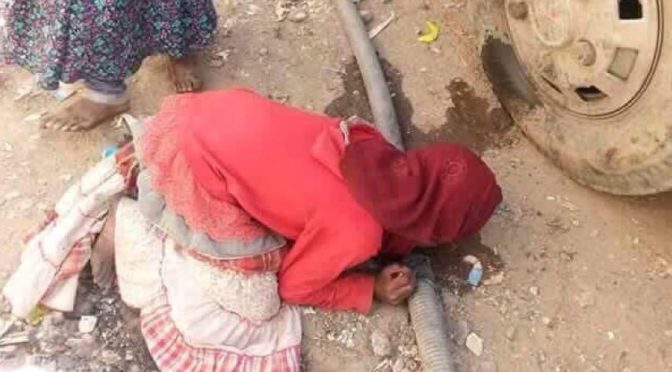 Fuck the UN-brokered ceasefire in ‪#‎Yemen‬. Children like the little Yemeni girl pictured here, quenching her thirst via a water pipe because the drinking water bottling plants and water filtration facilities have all been destroyed and contaminated by Al-Saud’s bombs, continue suffering in ways that shouldn’t be conceivable to the human brain. It’s day four of this alleged cessation in hostilities and not a moment has gone by without the flagitious Saudi regime’s violations, from Ta’iz to Ma’rib, Shabwah to Sanaa, Saada to Hajjah and Jawf.

Like ‘Israel’, the House of Saud isn’t capable of keeping its word, holding up an agreement or sticking to terms; this heinous gang of tyrants and bandits are deceptive at their very core and have broken every ceasefire that has been called into effect up until now. What’s so disgusting this time around is that the GCC media, especially the outlets of the Saudi “royals”, are waxing lyrical about Riyadh’s “humanitarian” commitment to the halt in fighting on the one hand, and on the other hand spreading sheer lies about violations originating with the Houthis, who haven’t fired a single damn shot except in response to the aggressions of the invaders. Most egregious of all though is that the all-out Saudi-Zionist-US-UK siege on Yemen, which has tens of millions of Yemenis starving, thirsty, malnourished and DYING OF INFECTIOUS DISEASES, remains in place and as of now, there’s no sign of it ending. Yemen, blockaded from land, air and sea from every side, makes devastated Gaza look like gentrified Brooklyn. It’s that ungodly.

Ban Ki-moon and his merry band of idiotic diplomats, who have granted the despotic Saudi devils political cover for this war from jump despite the token condemnation of massacres here and there, are not going to save Yemen. That job lies solely with Ansarullah, which only agreed to the conflict-stop in the first place to once again show the world how barbaric and bloodthirsty the Wahhabi psychopaths occupying the Hijaz really are. And if Al-Saud doesn’t want to actually bring its criminal and foolish adventure to an end once and for all, despite its astronomical and historic losses in men and treasure, the Yemeni Resistance ain’t got no problem at all teaching the Takfiri Kingdom of Darkness as many lessons as it’s gonna take with Striking Stars, Zelzals, Toshkas, Qaher-1s and more to make these aggressors wise up and pack it in… No UN, No US, just gather their equipment, mercenaries, warplanes and land vehicles in the middle of the night and leave, like the ‘Israeli’ enemy did in Lebanon on that most special 25th day of May in the year 2000. One way or another, TRUST, vengeance for Yemen’s martyrs, wounded, hungry, ill and thirsty will belong to the Yemeni Resistance.
‪#‎DeathToSaud‬ ‪#‎LongLiveYemen‬ ‪#‎VengeanceForYemensChildren‬