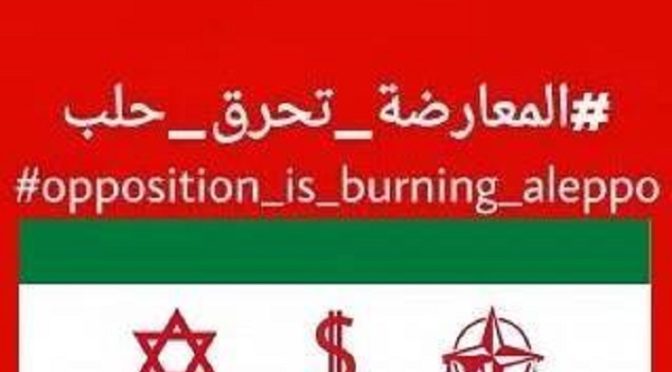 Never ONCE did these atrocious fakes shed rivers of crocodile tears for Lebanon when Takfiri suicide blasts were almost a weekly occurrence and would still be so today if Hizbullah didn’t destroy the Wahhabi fanatics’ bomb-making factories in Yabroud.

Never ONCE did these Sorosites think about making their Twitter, Facebook and Instagram profile pics red for Iraq as our people face Mossad-CIA-Saudi-created ISIS day in and day out, including another double car bombing today in Samawa that left at least 38 innocents slaughtered and more than 86 more badly hurt.

Never ONCE did these “anti-racist” frauds go nuts over NATO monstrously bombing Libya back to the times of pre-humanity and arming racist Takfiri psychopaths who literally lynched Black Libyans in Tawergha. Never ONCE did they stand with the Green Resistance against the barbaric onslaught that left over 100,000 Libyans martyred.

And most glaringly, NEVER MUTHAFUCKIN’ ONCE did these muthafuckin’ quislings go social-media-crazy for Yemen. Not when Zionist Al-Saud’s proxies bombed the Badr and Hashoush mosques. Not when tyrannical Al-Saud launched the invasion. Not when despotic Al-Saud bombed schools, hospitals, weddings, soccer fields, boxing gyms, youth centers, soda factories, food production facilities and more. Not when Dönmeh Al-Saud launched an all-out siege on the country, inflicting thirst, starvation and malnourishment on tens of millions of Yemenis. Not when ‘Israel’ openly involved itself in this genocidal aggression against the Yemeni people. Not now. Not then. Not ever. These fuckin’ despicable people, in their maddening, deafening silence, basically assert that Yemen and its magnificent Resistance led by Ansarullah don’t even exist.

To set things the hell straight, there is no “massacre” of “unarmed, peaceful civilians” in Aleppo by Syrian President Dr. Bashar al-Assad and the army of which he is the commander. The situation is, simply, the Syrian Arab Army and its allies fighting off a US-Zionist-NATO-GCC-led Takfiri invasion. That’s it. Period. Point blank. Done. Anyone telling a different story or vomiting a “both sides” narrative is a hasbara-spewing devil, these idiots with their red Facebook profile pics most especially. This is beyond selective solidarity and duplicity. The “Palestine Solidarity Movement” is a willing participant in the destruction of Syria, Iraq, Libya and Yemen. And they deserve every drop of our fury, condemnation, blisteringly harsh words and then some for their unconscionable, ungodly, unforgivable collaboration with the Anglo-Zionist Empire against our people.