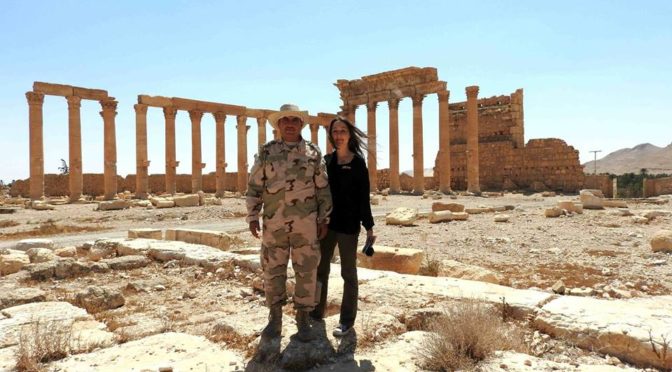 Eva Bartlett is a demon-slayer. The brave globe-trotting Canadian journalist went on RT’s CrossTalk for the very first time, and, with tremendous poise and professionalism, smashed “Professor” Stephen Zunes to smithereens. Many of you should know Zunes as a “nonviolence”-spewing charlatan, a veteran NGO-Human-Rights-Industrial-Complex goon, a longtime protector of the usurping Zionist entity’s cancerous existence and an enthusiastic early proponent of the ‘Israeli’-NATO-GCC-spawned “Syrian revolution”. The sister eviscerated the myth of the “moderate rebel”, in categorical rejection of Zunes’s lies, exposing the crimes of Ahrar al-Sham and Harakat Noureddine al-Zinki and blasting the Zionist press’s deliberate failure to cover Syrians enduring so much suffering because of these so-called “moderates”. Zunes droned on and on with the usual talking points of the First World “Left”, the vast majority not even worth repeating, but Eva wasn’t trying to hear any of it. She dropped eyewitness testimonies of Syrians who made it clear that there wasn’t a single difference between the Takfiri terrorist gangs regardless of their titles and she also crushed the longstanding crock of balderdash–which amazingly persists even five years on–that the origins of the war on Syria were “peaceful”.

Even as Zunes became damn near hysterical, calling for Dr. Bashar al-Assad to be hung at The Hague and laughably comparing him to Netanyahu and Nixon–this “professor” is a real live preacher of “nonviolence” and Anti-Imperialism, ain’t he?–Eva essentially told him that no Syrian cares what he thinks and that they love their president so much that they’ve risked their own physical security just to be near him. It was, simply put, a breath of fresh, pristine air to see someone on Syria’s side lay waste to one of the most reprehensible Sorosites on Earth. So Striking Star Salute to Ms. Bartlett for her wonderful, composed performance. And another Striking Star Salute for all her exceptional work on both Syria and besieged Gaza, where in both instances she headed right into the heart of the conflict with World Zionism and humbly reported, with no regard for her own person, on those forgotten by the criminally complicit mainstream media. Like Lizzie Phelan and Serena Shim (R.A.), if there were more Western journalists, nay, humans like her, we would all be a lot better off.

One thought on “Eva Bartlett Does Humanity A Favor: Rips Anti-Syria Hasbaranik Stephen Zunes To Shreds”