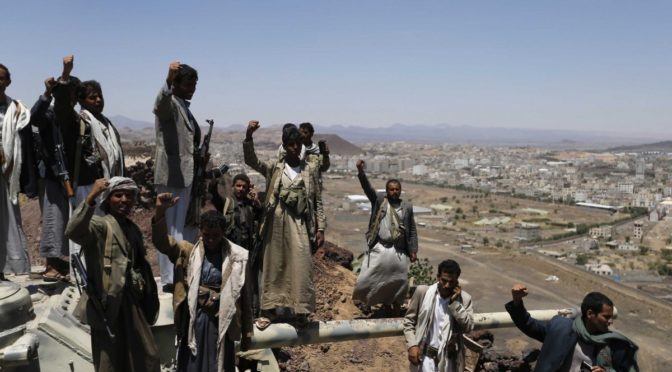 Eid Mubarak to all and Eid Mubarak most especially to Yemen. Righteous vengeance and victory always belong to Ansarullah! Only a few days after the murderous, crypto-Talmudic, baby-slaughtering Saudi regime massacred at least 40 Yemenis at a gas station on the Hayfan Intersection in Ta’iz, the Houthis brought honor to the martyrs by liberating the entire Hayfan DISTRICT! Allahu Akbar! The forces of the Yemeni Islamic Resistance are now swiftly approaching the strategic town of Turbah, which, once freed, will knock out the last supply line connecting Ta’iz to Al-Saud’s occupation capital of Aden and leave the invaders’ Hadi-loyalist proxies stranded with only two options: surrender or death.

With the US-Zionist-Saudi-orchestrated, Daesh-led Ramadan Massacre claiming the lives of nearly 500 men, women and children in Iraq, Syria, Yemen, Lebanon, Turkey, Afghanistan, Somalia and Al-Hijaz, the Houthis, as usual, remain the bright patch of green in a barren garden of darkness. With death, destruction and Takfiri destabilization engulfing all the previously mentioned states, not to mention ongoing oppression of the most barbarous order in occupied Palestine, occupied Kashmir and Bahrain, the Mighty Moujahideen of Ansarullah, as usual, remain rushing currents of hope and inspiration in a calm ocean of despair. After the Karrada atrocity, it felt arduous to the utmost extreme, even wrong, to be just the least bit celebratory, but upon seeing the smiles and raised fists of the Yemeni Islamic Resistance, rightness returns, and it’s simply impossible not to feel the joy pulsating within. Besieged but still fasting, bombed but still advancing, aggressed against but still avenging the fallen and crushing the Saudi oppressors, Yemen is once again teaching us the lessons of humility, dignity, triumph from tragedy and steadfastness. Shukran Ansarullah. Shukran kteer. As we mourn our martyrs, we can still celebrate because of you. Undoubtedly, all of the angels know you, and assuredly, all of them never miss a chance to kiss your feet and bless the hallowed ground you continue to achieve victory on. ‪#‎EidMubarak‬ ‪#‎EidKareem‬ ‪#‎LongLiveYemen‬ ‪#‎LongLiveAnsarullah‬ ‪#‎DeathToSaud‬