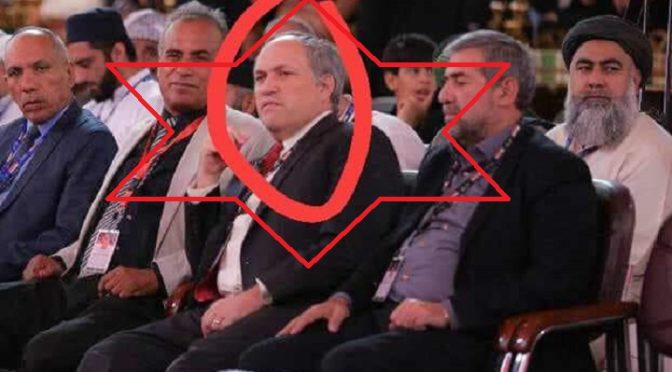 Zionist Jew and neocon war criminal Michael Rubin speaking inside Imam Hussein’s (A.S.) shrine. Abomination. Just… an abomination. Still completely whammied that this isn’t something out of our worst nightmares. It actually happened. This vile and monstrous creature was inside the haram of our beloved Aba Abdallah (A.S.) to give a talk about Iraq’s future on the somber occasion of Imam Zayn al-Abideen’s (A.S.) martyrdom anniversary–something this hateful and parasitic demon mistakenly, insultingly and despicably declared to be a “festival”. The first question is: Who the f*** invited him there? Was it the MI6-Mossad-linked Shirazis? Was it the “moderate” (read: Westoxified) Modaressis, who basically take orders from the Shirazis? Was it Saudi-owned Muqtada al-Sadr? Was it the new stooge in charge of the Iraqi government, Adel Abdul Mahdi al-Mountafiqi? Who? The second and perhaps more important question is: Why the f*** didn’t anyone remove his sanguinary Yahoudling hide from the maqam the moment that they knew who he was?

Granted, NO Zionist should ever foot in Sayyed al-Shouhada’s (A.S.) resting place–centrally because of Zion’s status as the mastermind of Iraq’s obliteration and also because of the insidious role played by the Jews in the slaughterous tragedy of Ashoura. But Michael Rubin… He’s a special kind of scum and there is no measuring tool currently in existence that can accurately evaluate the defilement he brought to Maqam al-Hussein with his presence. This is a slime who worked in the Office of Special Plans (OSP) with Feith, Perle, Wolfowitz, Shulsky, Ledeen and Michael Makovsky, cooking up the “Iraq has WMDs” lie that would be used as the pretext for the US-British-Zionist invasion. If there was a book simply called “Who killed Iraq?”, Rubin would be one of its authors.

It isn’t hyperbole when we say that he’s bathing in Iraqi blood–it’s an uncomfortable but nevertheless undeniable fact. Before working in the Pentagon’s most secretive and destructive intelligence agency, he was writing up hasbara for WINEP, AIPAC’s think tank, as well as the Middle East Forum, founded by Jewish supremacist maniac Daniel Pipes. Today, he’s a bigwig at the American Enterprise Institute (AEI), funded by Jewish-Zionist hedge fund billionaire Bruce Kovner, the handler of 9/11 co-conspirator Dick Cheney, a man that Rubin worked with closely as an OSP operative and the Pentagon’s Iran-Iraq Affairs Director.

Prior to being one of World Zionism’s top think tankers, he was a lecturer at Hebrew University, one of the central pillars of the usurping Zionist entity’s all-penetrating Talpiot program, and the Universities of Suleimaniyah, Salahuddin, and Duhok, premier schools of Iraq’s “Kurdistan” that churn out Kurdish intelligence agents that work hand-in-glove with Mossad. This isn’t just a detail in a dossier but information of particular significance as Rubin himself was right in the thick of the AIPAC spying case involving Wolfowitz-and-Feith henchman Larry Franklin, who passed a document authored by Rubin about implementing regime change in the Islamic Republic of Iran to the malignant Zionist cancer.

Knowing everything we know about Rubin, there should be little to zero doubt that Franklin passed the paper to ‘Israeli’ officials with Rubin’s full-on approval. Indeed, Rubin is a fervent hater and opponent of the Islamic Revolution and longs to see it overthrown. Alongside his old OSP homeboy Makovsky, he authored “Meeting the Challenge: U.S. Policy Toward Iranian Nuclear Development”, a step-by-step process in how to launch a war against Iran. Consider it a companion to the Brookings Institution Saban Center’s “Which Path To Persia?” Rigorously bloodthirsty Rubin is hoping he can help do to Iranians what he’s already done to Iraqis.

After Imam Hussein (A.S.) was butchered and dismembered on the sands of Karbala, would the aforementioned Jews who financed and aided Yazid’s (L.A.) butchery of Ahlul Bayt (A.S.) be allowed to speak about the Ashoura Shouhada? NO, NO AND NO. In the wake of the Khaybar Jewesses poisoning the Holy Prophet Muhammad (S.A.W.W.), would they be granted quarter to speak of Rasoulallah’s (S.A.W.W.) nobility and other sublime characteristics? OF COURSE THE HELL NOT. So with that noted… Why the f*** was Michael Rubin, one of the “chosenite” terrorists who helped plan and execute the evisceration of Iraq, let anywhere NEAR Maqam al-Hussein, LET ALONE inside it; LET ALONE to SPEAK on its hallowed ground?

Someone must answer for this atrocity. And whoever is responsible should be imprisoned for the remainder of his pathetic days for treason. A disgrace to Iraq. A disgrace to Islam. A disgrace to Imam Hussein (A.S.) and Imam Zayn al-Abideen (A.S.) For the love of Almighty God, how much more humiliation can Iraq take? Make no mistake either, being the Halakhic-Talmudic fanatic he is, this neocon felon knows in his brittle bones that his presence at such a site is an aggression; a continuation of the Zionist assault on Bilad al-Rafidayn. Keeping in mind the primal Judaic hatred for Ahlul Bayt (A.S.) and how their spiritual offspring (the Resistance Axis) are thwarting Zion’s schemes in the here-and-now, it’s probably why he agreed to make the appearance in the first place.

And lastly, a message for the demonic topic of our discussion, Michael Rubin: Enjoy yourself and let your little jaunt go to your head… Because everything you’ve perpetrated against Iraq and are planning against Iran is written in the notebooks of ALLAH’s (SWT) Fleet of Angels (A.S.), who you won’t be able to skate from. Jahannam is your destiny. Meanwhile, justice for all the crimes committed by you and your tribalist brethren… Which we fight to capture and implement in the name of Aba Abdallah (A.S.)… Is ours. And don’t you ever forget it.