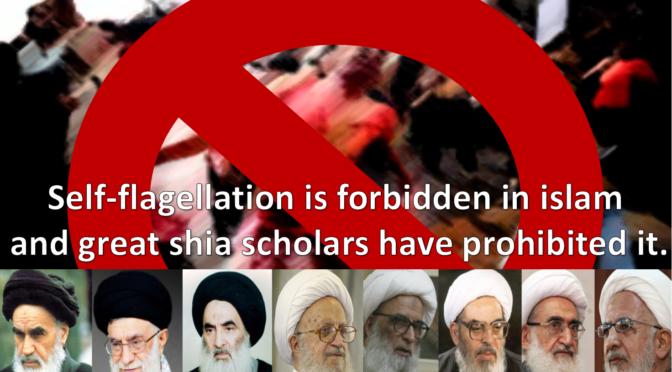 To all my non-Shi’a Muslim brothers and sisters as well as my non-Muslim comrades: DO NOT FOLLOW THE SHAMEFUL ZIONIST MEDIA AND THE EVEN MORE SHAMEFUL ALTERNATIVE MEDIA (here’s looking at your despicable “reportage” RT and Sputnik) ABOUT WHAT SHI’A MUSLIMS DO ON ASHOURA. The bloody pictures that are being promoted across the spectrum of extremist Shi’a disgustingly self-flagellating and cutting their children DO NOT, I repeat, DO NOT represent Islam in any way, shape or form, whether the Shi’a school of thought or otherwise. These barbaric practices, known as Tatbir and Zanjeer, are alien to Islam and have been forbidden by just about major Shi’a authority on the planet, including (but not limited to) Ayatollah Sayyed Ruhollah Khomeini (R.A.), Ayatollah Sayyed Muhammad Hussein Fadlallah (R.A.), Ayatollah Sayyed Muhammad Baqir al-Sadr (R.A.), Ayatollah Sayyed Ali Khamenei, Ayatollah Sayyed Ali Sistani, Sayyed Hassan Nasrallah, Sayyed Hashim al-Haidari and others.

Tatbir and Zanjeer only came about in the early 1800s when the colonialist British regime was making inroads in both Al-Hijaz–where it injected Wahahbism into our midst and propped up Al-Saud–and the Southeast Asia Subcontinent. Freemasonic “Christian” missionaries who practiced self-flagellation introduced these atrocious practices into the poorest of the poor Shi’a communities by using general knowledge of Ashoura acquired from Orientalists to gain an audience and then subsequently tricking residents into adopting such deviance as if it was legitimate way to mourn over the bloodshed in Karbala. This was despite its lack of even a rational basis, let alone Islamic jurisprudential basis. The missionaries, as all Iraqis, Iranians, Hijazis and Subcontinent citizens know, were an integral part of the Cultural Imperialist elements of the Rothschild-financed British colonialist project.

Today, it is Yasser Habib and the Shirazi Movement–the MI6 Shi’a and US State Department Shi’a as they’re referred to by Sayyed Hassan Nasrallah and Ayatollah Sayyed Ali Khamenei–who not only promote Tatbir and Zanjeer, but tell their brainwashed followers that this filth, this insult to Imam Hussein (A.S.) and disgracing of the meaning of Ashoura, is obligatory. These are the same treacherous collaborators who openly insult the companions and wives of the Holy Prophet Muhammad (S.A.W.W.), bash Hizbullah, push attempts to normalize with ‘Israel’, call for the overthrow of the Islamic Republic of Iran and just engage in all types of other roundabout fitnah, specifically against Sunnis, on behalf of their British and Zionist overlords. Ayatollah Mohsen Araki, a student of Ayatollah Sayyed Muhammad Baqir al-Sadr (R.A.) and a close ally of Ayatollah Sayyed Ali Khamenei, said in a lecture last year that the Washington and London ZOGs, through these Shirazi Movement proxies, promote Tatbir and Zanjeer to tarnish the image of Shi’a Islam. He couldn’t be more right on target.

Keeping this context in mind, the Western corporate press, which is largely owned and completely dominated by Zionist Jews, is not spreading these gruesome photos out of ignorance or cluelessness but doing so deliberately to spread Shiaphobia among Sunnis and perpetuate manufactured sectarian divisions inside the Ummah. Zionist “news” outlets, in all their cunning, want to shift the narrative to how horrifying it is to see parents digging knives into the heads of newborn babies instead of discussing what Ashoura is really about: A revolution against tyranny and injustice, which, when applied to the current geopolitical landscape, is a perfect reflection of the struggle waged by Palestinians, Syrians, Lebanese, Iraqis, Yemenis, Nigerians, Pakistanis, Afghanis and others against the three-headed Dajjalic beast of America, ‘Israel’ and Al-Saud. But showing some pictures of a few hundred (or even a few thousand) extremists in an ocean of 250+ million Shi’a Muslims worldwide will not blot out the light of Imam Hussein (A.S.) and the sacrifices that he and his partisans made on the 10th of Muharram in 680 A.D. Not at all!

If you want to see what Ashoura is REALLY about, then feast your eyes on Lebanon’s Dahiyeh, where hundreds of thousands of Lebanese Shi’a marched and chanted “Death To Al-Saud!” and “Death To ‘Israel’!”as Sayyed Hassan Nasrallah delivered another classic speech in a renewal of the commitment to Imam Hussein (A.S.) Delight in the sight of the Yemeni people protesting in all their Husseini glory–and in their millions at that–against the Saudi invaders tearing their nation apart. Turn your attention to my beloved Iraq where not mere millions but TENS of millions of pilgrims flocked to the shrines of Imam Hussein (A.S.) and Abou Fadhl al-Abbas (A.S.) in the holy city of Karbala and peacefully demonstrated in commemoration of this sanctified day. Take a gander at the Nigerian cities of Funtua and Kaduna where today at least 14 unarmed demonstrators from unjustly imprisoned revolutionary Sheikh Ibrahim Yaqoub al-Zakzaky’s Islamic Movement of Nigeria, including several women, were shot dead by the US-Saudi-‘Israeli’-backed Buhari regime. Look at occupied Afghanistan, where in Balkh and Kabul the lovers of Imam Hussein (A.S.) took to the streets peacefully only to be shot and bombed to death by the Takfiri grandchildren of Yazid (L.A.) And of course, gaze in awe at the Islamic Republic of Iran where more than half the nation flooded city, town and village blocks to commemorate the Master of Martyrs (A.S.) and scream their lungs out at Zio-Imperialism and the Saudi Kingdom of Darkness. No Tatbir. No Zanjeer. Only Islam and pure, peaceful, powerful, heartfelt love for Muhammad (S.A.W.W.) and his Household (A.S.)

Just as we all stand vehemently against the un-Islamic perversion we call Wahhabi-Takfirism as a means of preserving Islam and defusing Zionist propaganda against our Deen on a world scale, we must also rebuke the un-Islamic practices of the MI6 Shi’a and their extremist brethren as a means of preserving the memory of Imam Hussein’s (A.S.) martyrdom and crushing the attempts of the Anglo-Zionist Empire to spread Sunni-Shi’a fitnah. For 1,336 years, we have triumphed in the face of our enemies attempting to erase Ashoura from history. Now is not the time to stop fighting because of a handful of morons who want to follow British-concocted deviance and cut themselves instead of fighting the Yazid (L.A.) of our time: Global Zionism. We must continue onward, unhindered. Labaykah ya Hussein! Death to Tatbir! Death to Zanjeer! Death to Wahhabism! Death to the British regime! And Striking Star Salute to all Muslims, be you Sunni or Shi’a, and all non-Muslims, be you Christians or nonbelievers, who adhere to these righteous epithets.

3 thoughts on “Deviant, Disturbing Innovations Of Tatbir and Zanjeer Are Promoted By Zionist Media To Spread Shiaphobia”