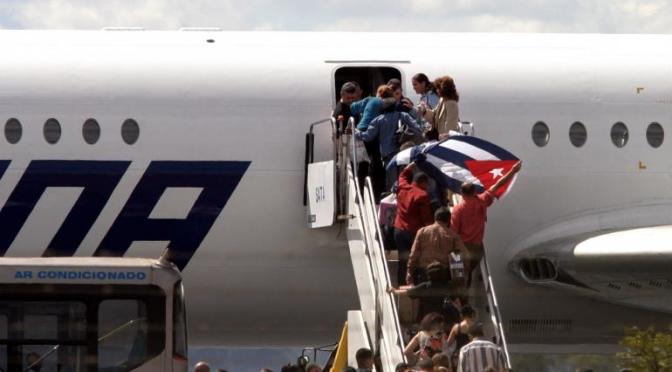 While western media interest has faded with the receding threat of global infection, hundreds of British health service workers have volunteered to join them. The first 30 arrived in Sierra Leone last week, while troops have been building clinics. But the Cuban doctors have been on the ground in force since October and are there for the long haul.

The need could not be greater. More than 6,000 people have already died. So shaming has the Cuban operation been that British and US politicians have felt obliged to offer congratulations. John Kerry described the contribution of the state the US has been trying to overthrow for half a century “impressive”. The first Cuban doctor to contract Ebola has been treated by British medics, and US officials promised they would “collaborate” with Cuba to fight Ebola.

But it’s not the first time that Cuba has provided the lion’s share of medical relief following a humanitarian disaster. Four years ago, after the devastating earthquake in impoverished Haiti, Cuba sent the largest medical contingent and cared for 40% of the victims. In the aftermath of the Kashmir earthquake of 2005, Cuba sent 2,400 medical workers to Pakistan and treated more than 70% of those affected; they also left behind 32 field hospitals and donated a thousand medical scholarships.

That tradition of emergency relief goes back to the first years of the Cuban revolution. But it is only one part of an extraordinary and mushrooming global medical internationalism. There are now 50,000 Cuban doctors and nurses working in 60 developing countries. As Canadian professor John Kirk puts it: “Cuban medical internationalism has saved millions of lives.” But this unparalleled solidarity has barely registered in the western media.

Cuban doctors have carried out 3m free eye operations in 33 countries, mostly in Latin America and the Caribbean, and largely funded by revolutionary Venezuela. That’s how Mario Teran, the Bolivian sergeant who killed Che Guevara on CIA orders in 1967, had his sight restored 40 years later by Cuban doctors in an operation paid for by Venezuela in the radical Bolivia of Evo Morales. While emergency support has often been funded by Cuba itself, the country’s global medical services are usually paid for by recipient governments and have now become by far Cuba’s largest export, linking revolutionary ideals with economic development. That has depended in turn on the central role of public health and education in Cuba, as Havana has built a low-cost biotech industry along with medical infrastructure and literacy programmes in the developing countries it serves – rather than sucking out doctors and nurses on the western model.

Internationalism was built into Cuba’s DNA. As Guevara’s daughter, Aleida, herself a doctor who served in Africa, says: “We are Afro-Latin Americans and we’ll take our solidarity to the children of that continent.” But what began as an attempt to spread the Cuban revolution in the 60s and became the decisive military intervention in support of Angola against apartheid in the 80s, has now morphed into the world’s most ambitious medical solidarity project.

Its success has depended on the progressive tide that has swept Latin America over the past decade, inspired by socialist Cuba’s example during the years of rightwing military dictatorships. Leftwing and centre-left governments continue to be elected and re-elected across the region, allowing Cuba to reinvent itself as a beacon of international humanitarianism.

But the island is still suffocated by the US trade embargo that has kept it in an economic and political vice for more than half a century. If Barack Obama wants to do something worthwhile in his final years as president he could use Cuba’s role in the Ebola crisis as an opening to start to lift that blockade and wind down the US destabilisation war.

There are certainly straws in the wind. In what looked like an outriding operation for the administration, the New York Times published six editorials over five weeks in October and November praising Cuba’s global medical record, demanding an end to the embargo, attacking US efforts to induce Cuban doctors to defect, and calling for a negotiated exchange of prisoners.

The paper’s campaign ran as the UN general assembly voted for the 23rd time, by 188 votes to 2 (US and Israel), to demand the lifting of the US blockade, originally imposed in retaliation for the nationalisation of American businesses and now justified on human rights grounds – by a state allied to some of the most repressive regimes in the world.

The embargo can only be scrapped by congress, still stymied by the heirs of the corrupt US-backed dictatorship which Fidel Castro and Guevara overthrew. But the US president has executive scope to loosen it substantially and restore diplomatic ties. He could start by releasing the remaining three “Miami Five” Cuban intelligence agents jailed 13 years ago for spying on anti-Cuba activist groups linked to terrorism.

The obvious moment for Obama to call time on the 50-year US campaign against Cuban independence would be at next April’s Summit of the Americas – which Latin American governments had threatened to boycott unless Cuba was invited. The greatest contribution those genuinely concerned about democratic freedoms in Cuba can make is to get the US off the country’s back.

If the blockade really were to be dismantled, it would not only be a vindication of Cuba’s remarkable record of social justice at home and solidarity abroad, backed by the growing confidence of an independent Latin America. It would also be a boon for millions around the world who would benefit from a Cuba unshackled – and a demonstration of what can be achieved when people are put before corporate profit.