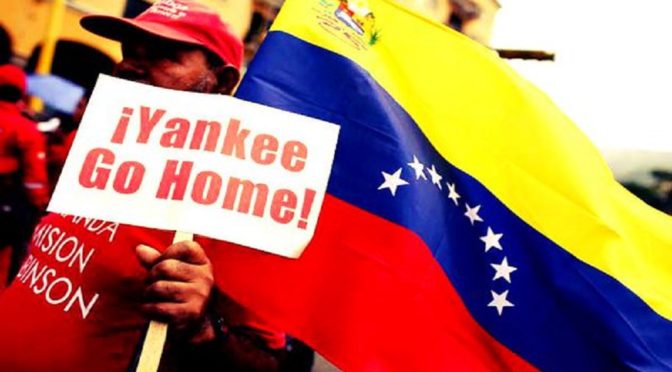 So if you’re surprised by the coup-coup clock striking 12 in Venezuela as Trump recognizes the unelected and vastly despised neoliberal charlatan Juan Guaidó as the new top dog in Caracas, with the absurd and Orwellian notion that it has been done in the name of “democracy”, then you simply haven’t been paying attention. Because the Trump regime has been waging war on the Bolivarian Revolution from the opening days of his presidency–like Obama and Bush before it.

Just three weeks into the Trump presidency, brutal sanctions were implemented on Venezuela, particularly targeting then-Vice President Tareck El Aissami, a Syrian-Lebanese-Druze revolutionary, perennial Chavista and anti-narco-trafficker who the Zionist media ridiculously smeared as… Yeah, you guessed it… a narco-trafficker.

Then Trump, Pence and Marco Antonio Rubio (another anti-Bolivarian fanatic bankrolled by Zionist gazillionaire Norman Braman) met with the wife of seditionist Leopoldo Lopez, plotting the next steps for deepening the color revolution.

By April 2017’s end, Chavistas were being gunned down in the street by the US-backed “opposition” as well as its partners in Mossad and violence against Venezuelan security forces had become a barbaric everyday reality. Kidnappings, hackings of state institutions, and major damage from sanctions and Saudi Arabia’s Zionist-ordered overproduction of oil also began taking a terrible toll.

This spiraled into a food crisis coupled with a DIA-style operation of removing El Comandante Hugo Chavez’s (rip) statue in Zulia State. An NED-funded gusano, Julian Borges, was propped up by the US national-security apparatus as an influencer in the ever-growing coup and the war-loving psychopath John McCain–now dead and rotting in hellfire, thank God–put legislation on the Senate floor for even more sanctions.

Empowerment of the Green Helmets, the Venezuelan version of the terrorist White Helmets, was the next phase and to make matters more disgusting and virulently racist, the “freedom-loving” and “democratic” anti-Bolivarians starting burning and lynching Black Venezuelans just because they identified as Chavistas.

The destabilization progressed on various fronts and as a year went by, the American regime was now openly threatening the Bolivarian Revolution with military intervention and not too long thereafter, aided by the usurping Zionist entity, this same American regime, which proclaims itself a paragon of “human rights”, even made an attempt on Nicolas Maduro’s life. As per a CONSERVATIVE estimate, the US ZOG’s sanctions have cost Venezuela $6 billion since August 2017. And you know those food shortages that we hear so much about in the Yahoudling-controlled corporate press, in which Bolivarian “socialism” is held responsible? They’re a clear-cut plot by the US regime and its bought-and-paid-for Latin American allies inside and outside Venezuela. Maduro isn’t starving a soul. The Imperium is. Like we said… if the latest developments coming out of Venezuela are coming as an astonishment to you, you’ve had your head in the sand.

The choice of Juan Guaidó as the chief golpista is an interesting one. One would’ve thought following all their grooming along with their decades of services to Empire Judaica, Leopoldo Lopez, Henrique Capriles Radonski or Antonio Ledezma would’ve gotten the pick. But instead it was Guaidó, the younger, fresher – and let’s be honest here – easier-to-control face. He was actually mentored by Lopez and has the full support of the Zionist media as well as the NGO-Human-Rights-Industrial-Complex, with figures like Zionist Jew and CFR member Michael Shifter – a long-time fixture in Zio-Imperialist pursuits South of the Border as he headed up the NED’s Latin American and Caribbean Program, the CIA-linked Ford Foundation’s Governance and Human Rights Program In The Andean Region and Southern Cone, and the Americas Division of Soros-funded Human Rights Watch (Botched), not to mention being a guiding force in turning Colombia into the ‘Israel’ of Latin America – heaping heavy praises upon him.

Also key to know that David Smolansky, the traitor and Zionist Jew who was featured on Americas Quarterly’s “After Maduro” series just three days after ‘Israel’ and the US took a shot at the Venezuelan President, has spoken highly of him too, granting his approval and gusano-solidarity. Smolansky’s a major anti-Chavista shot-caller and Americas Quarterly of course is a historical organ of Empire propaganda, founded by the Rockefeller dynasty and supported by spooks and wonks from various agencies to this day. Looks like Guaidó knows his role quite intimately because barely two seconds after the Trump ZOG recognized his faux authority, he already made overtures to the IMF and the multinational oil conglomerates, promising neoliberal, privatizing “reforms” across Venezuela’s oil sector the very moment Maduro is removed. And it ain’t just the petrol. Guaidó’s pushing a neoliberal agenda on steel, electricity, cement, telecommunications, land estates and more. Workers and the poor will be trampled. Everything built by Chavismo will be undone and Shaytan al-Akbar will be in control. This is the “democracy” these treasonous sellouts and their Western string-pullers want for Venezuela.

We cannot conclude without making an observation about the timing of this accelerated assault on Venezuela’s sovereignty. It comes right on the heels of Trump maneuvering to get out of Syria and receiving heavy pushback from the same Zionist Lobby that is now guiding his policies on Venezuela. Easy-peasy-lemon-squeezy to figure out the math. Shlomo is calling in the favor. He gave Trump the presidency. Let him play peacemaker. And hero. And isolationist. And now he is coming to collect his pound of flesh Shylock-style. As the attack on Bolivarianism continues, the Zionist hands will become all the more clear; all the more disturbing; all the more vicious. The Venezuelan people, their armed forces (who reject a “Caracas Spring”) and their leadership with Maduro at the forefront, are all resisting. We revert once more to past work to express why we should resist too… Because the words ring even truer today, “In the easiest-to-understand terms, if Venezuela falls, the Empire of Zion wins. Immensely. So WRITE. And SPEAK. And RALLY. And MARCH. And SCREAM if you have to. The Venezuelan people are fighting back to destabilize the destabilizers and restore peace to their nation. In the name of all that is right and just in this world… We must fight with them.” Ameen. Viva la Revolución Bolivariana!!