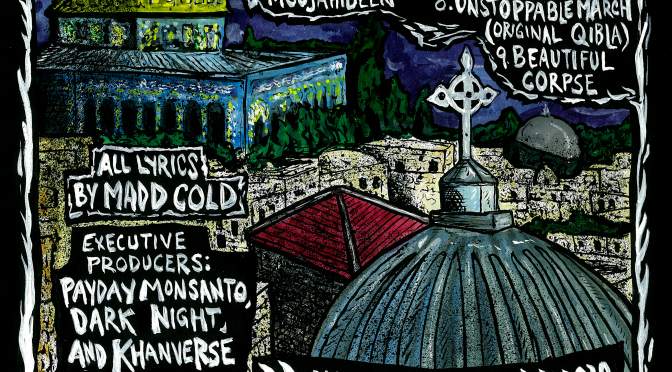 The debut EP from Madd Cold aka Jonathan Azaziah, “Enemy Of The Entity” is a masterpiece work of unmatched passion and next-level lyricism dedicated to the Palestinian people and their precious cause. Mixed and mastered by underground Hip-Hop legend Payday Monsanto, Madd Cold’s “Enemy Of The Entity” will be released for sale on October 29th, 2014, the 58th anniversary of the Kufr Qassem massacre, and all proceeds will be donated to the Zaytoun-Bil’in Project which aims to plant olive and fig trees in defiance of criminal Zionist settlers who habitually attack Palestinian farms. Buckle up, ’cause you ain’t never heard Hip-Hop like this before! (EP cover by Chris Katko)

Created by the viciousness of British imperialism, and you are still slaves of the Raj/Upwards of 20 billion dollars a year, we know you’re getting paid from the Hajj/And every penny is used to fund oppression/40,000 prisoners in your dungeons and mothers are wondering where the sons are, where? In Al-Hayer being shunned and shredded/Plus you are buying up tons of weapons/For decades, you have put the guns to Yemen/Put your tanks in Bahrain to continue the most glum regression/And shoot tear gas and dum-dums into young protesters/Joblessness and poverty reign/’Cause hatred of the Shi3a is the only thing that clicks in your Wa77abi brains/With bloody cries, we remember May 1, 1925, this is the spirit of Baqi/This loud joint is the proud voice for the fearless in Qatif/
END_OF_DOCUMENT_TOKEN_TO_BE_REPLACED

Salute to Syria first, everything, that is what Syria’s worth, because it is the front line of the battle/Bless to the Syrian Arab Army, eat rebels at lunchtime, we’re with you as you crush lies into gravel/Bless to Mugabe, and Zimbabwe, we know you got that heavy revolutionary thunder, it is clear/To Kim Jong-un and the Democratic People’s Republic of Korea/Struggle with no fear to defeat the disgrace in the South/Their plunder is severe but we know that you make them shake in amazement and doubt/We are with you ‘till Korea is whole again, and all the Empire’s bases are out/United Snakes of Israhell, what, you don’t see these cavaliers looting?/Traitors, you support their accursedness, me? I implore the alternative, I ain’t here for blunder brother, my solidarity, is with Mother Russia under Vladimir Putin/Smashed up the Zionist oligarchs, if they remained, things would’ve gotten messier/Blasted international spin, after the win, over the Saudi-Israeli plot in Chechnya/ Fought hard for the unity between Muslims and Christians/Only the hypocrite haters have overlooked this position/Shielder of Iran and the shielder of al-Sham/Abu Ali Putin said Russia is the shielder of Islam/Forces of the Christ and the Mahdi united as it was revealed in the Qur’an/
END_OF_DOCUMENT_TOKEN_TO_BE_REPLACED

No, not again/Don’t pop it in/Even when you do it slow I feel my brain jolt go pop then spin/Not a tube for feeding, it’s a tool for demons, it’s the brutal reason my soul rots and slims/Soul’s gotten dim/All of my light has fried in Guantanamo and I am in a hole locked with jinn/Gangrene build up, I feel a roach squat within/No, not my limbs, I would rather just wither up and die/Feeling the tube as it jiggles in my eye/You forcefeed us like this was the circus and we’re your creatures, isn’t this a crime?/Censored our names so your public never knows what this hunger’s like/Gitmo to Palestine, our hunger strike against the “war on terror’s” rabid lie is madd alive, we ain’t gonna run from this fight/
END_OF_DOCUMENT_TOKEN_TO_BE_REPLACED

Pig, bacon or pork, you can take your pick/Hood kids shake and they cough when you pace in whips/’Cause they know another Amadou Diallo could happen again at any second/They’re scared to become another Sean Bell, hell, they’re already prepping/Parents ain’t avid believers in justice ‘cause of Abner Louima, disgusted, they are steady stressing/7 years old, you murdered Ayana Jones with your heavy weapons/Tears drop where Timothy Stansbury’s resting/Beat Jordan Miles to within an inch of his life/Fouad Kaady was hardly alive when you shot him, but he wasn’t innocent, right?/This here’s to revolt, not to dance/So bust a motherfucking shot in the toxic air/For Oscar Grant/And rock this at the precinct so every dirty cop can hear/
END_OF_DOCUMENT_TOKEN_TO_BE_REPLACED

Everyday is 3ashoura, everyday is Karbala, ya 7ussein, we were born from your breath/Warrior of the highest order, a glorious lion’s heart that roars in your chest/Martyrdom over humiliation, we long for the pureness of death/With no fear or pain, we fight against the bane in your name, ya 7ussein, ya 7ussein, this is for the oppressed/For the truthful mother leaving her abusive husband to protect her kids/For the Kansas girl whose parents when she reverts to Islam, works the hijab, they just will not let her live/For the crack fiend cured now, close to the Supreme Lord (SWT) now since he gave up the drugs/Ya 7ussein, you taught us that the hate is too weak to reign against the greatness of love/
END_OF_DOCUMENT_TOKEN_TO_BE_REPLACED

Pardon me as I make a du3a for the Syrian army defending Syria’s sovereignty in the middle of a crisis/And to the opposition you are not Resistance you are mocking it with your treacherous words and belittling the righteous/You should be despising yourselves, aligning yourselves with Israel, NATO and their puppet oil and gas regimes/Plot is 30 years old but Syria will crush and foil your drastic scheme/Birthed with the Brotherhood insurgency in seventy six/Ended in eighty-two, Hafez al-Assad wasn’t murdered and the enemies flipped/In light of this reality, Israeli foreign policy advisor Oded Yinon composed a strategy to break the nation apart/Transform it into weakened and demolished states for Israel to confiscate, dominate and keep the people strafed and facing the dark/Updated in ‘96 as “Clean Break” by Zionist criminals Perle and Feith/Said that Turkey and Jordan would be key to the rollback, a cold trap to set this miserable world alight/Finalized with stooges Bush and Obama, ain’t a revolution, they are lying to you steadily/Arab Spring coined by Charles Krauthammer, neocon cancer and international PSYOP to further Zionist hegemony/ END_OF_DOCUMENT_TOKEN_TO_BE_REPLACED

To Falasteen, you are my heart, my mind, my body, my soul/We will not stop our fight ‘till your body is whole/Lifta to Al-Jalil, Al-Quds to Gaza City/Long live the Resistance, steadfast, leaving the Zionists’ heads smashed, there is no time to harbor pity/These demons are aggressive and evil is their essence, they are pharaonic rulers modernized and/Worshipers of Satan, they are murderers and racists, the cruelest lot of liars/Falasteen has seen 131 years of Jewish colonizing/Not to mention 65 years it’s been occupied, land has been toxified, massacres by savages, ravaging, madd dead/Nakba, Naksa, all the way to Cast Lead/Ramla, Dueima, Deir Yassin/Kufr Qassem, Khan Younis and Jenin/All were brutally assaulted by this goddamn regime/But the Palestinian people left oblivion vetoed ‘cause you are still there/White phosphorus bombs boom and spill tears/Globally, Zionist Lobby goons instill fear/So much culture vultured, look at what the Jews have killed here/This is genocide, what they do is real clear/That is why we pray to see the usurping Jewish entity’s destiny end/ With the return of every single Palestinian and Lebanese refugee ethnically cleansed/ END_OF_DOCUMENT_TOKEN_TO_BE_REPLACED