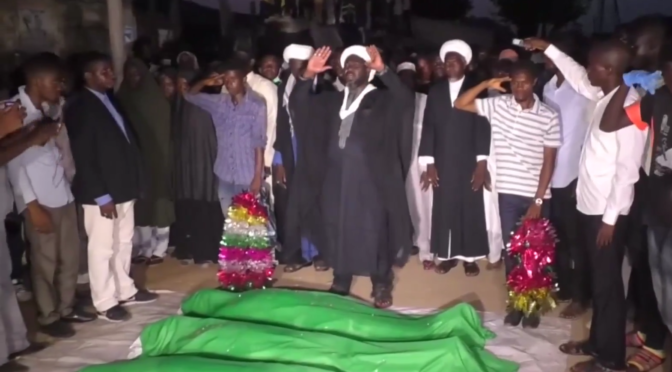 Death to the Buhari regime. And then another death to the Buhari regime. And one thousand… NO… TEN THOUSAND MORE deaths to the corrupt and criminal, traitorous and treacherous, venal and villainous, US-‘Israeli’-Saudi-backed Buhari regime. Barely 24 hours after massacring nearly a dozen Nigerian Shi’a activists of the Islamic Movement of Nigeria as they marched for Arbaeen near Zuba in Abuja’s barrens, Shabbos Goy Buhari’s goons were at it again, this time slaughtering 32 more innocent souls as the march continued through Maraba, also on the capital’s outskirts. Martyr count for the Arbaeen Symbolic Trek now stands at 42 and it may get higher in the morning because many of the wounded are in critical condition.

The idea of tens of thousands of Islamic Liberationists mourning for Imam Hussein (A.S.) and linking it with the savage, sanguinary oppression of their leader–Sheikh Ibrahim Yaqoub al-Zakzaky, whose struggle and sacrifices resemble Aba Abdallah (A.S.) and what befell him on Ashoura more so than any other personality in the Islamicate–is clearly too much for Muhammadu the Murderer. Though he’s plotting it, he can’t kill Zakzaky because of the global backlash that will forcibly ensue like a tidal wave but he can’t free him either–in total disregard and disrespect for his own Federal High Court in Abuja and the decision made by Justice Gabriel Kolawole to release the Sheikh–because it would upset his masters in “Tel Aviv”, Riyadh and Washington, so he resorts to bloodshed. Buhari does get credit for one thing: His impression of Yazid (L.A.) is as good as any Shi’a-hating despot in the world. Maybe even better. Disgusting, collaborationist bag of swill that he is.

As the Islamic Movement of Nigeria buries its Shouhada, we issue a challenge to the “woketivists” who always have an opinion about some meaningless identity politics issue in the Diaspora but seemingly can’t be bothered with matters of significance like Sheikh Zakzaky’s plight, Yemen or occupied Kashmir. Even their “support” for Palestine is watered down and Judaized but we digress. The challenge goes as such: How about you stop raising awareness and money for dead Zionists and start raising awareness and money for the Islamic Movement of Nigera, a nonviolent, Anti-Zionist, Anti-Imperialist, justice-seeking organization that is being persecuted solely for its school of thought number one and its opposition to the Zio-Imperium number two? Is that possible? Or have you truly thrown out your spines along with your brains after you got your marching orders from one of the many institutional fronts of Zionist Jews masquerading as “humanitarians” George Soros and Peter Ackerman? Let us know.

In the mean time, we also issue a call on behalf of the Khomeini of Africa: FREE SHEIKH ZAKZAKY AND SAYYEDA ZEENAT NOW! We demand justice for the Zuba Martyrs, the Maraba Martyrs, the Zaria Martyrs of 2015, the Martyrs of Al-Quds Day 2014 and all the innocents of the Islamic Movement of Nigeria killed, maimed, tortured, arrested and tormented by the crooked gangsters Goodluck Jonathan and Muhammadu Buhari–both of whom are heading for the darkest and dankest regions of Jahannahm. All these Shouhada, in life and in death, personified the 10th of Muharram and solidified that Zaria, the birthplace of Zakaky’s righteous cause, is Karbala. Indeed, when we say “Labaykah ya Hussein (A.S.)!” and “Labayki ya Zaynab (A.S.)!”, either for Ashoura or Arbaeen, nobody is more represented and honored by those declarations of resistance than the Shi’at al-Ali of Nigeria. Nobody. Rest in power to all of our fallen brethren.