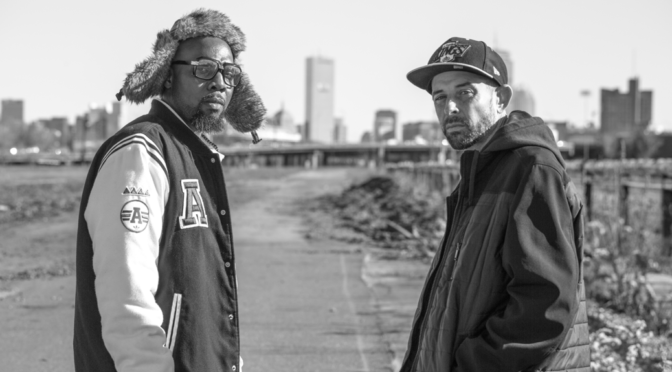 There are those who constantly pontificate about Hip-Hop being dead and it is only a knockout away from being down for the count permanently. But such persons, apart from being ignorant imbeciles, don’t have their ears close enough to the ground to know that Hip-Hop is in fact alive and well with PLENTY left in the tank. The maddeningly ill Blak Madeen are proof of this conclusion and their newest record “Supreme Aftermath” drives the point home even further like a stake into the chest of a culture-vulture-vampire. Anybody who identifies as a Hip-Hop head needs to give this masterful piece of music a healthy spin, or two, or ten, or a hundred! The dynamically dope duo has got it all, madd bars, madd flows, consciousness, depth, attitude, a hell of an ear for beats, lots of scratches throughout the record for that true school/classic effect, some serious spiritual elevation and a wondrous chemistry that is rare among even the all-time great groups of Hip-Hop. Indeed, the tremendously talented twosome from Boston mesh on wax perfectly. Yusuf Abdul-Mateen Trombly, who I’ve had the pleasure and honor of building with at length over the past couple weeks, is the more lyrically gifted of the two, with rhyme schemes, insights and wisdom for days, and Al-J is the more sonically gifted of the two, with a crisp, fierce flow and a gritty voice reminiscent of Black Thought. Together, they make top-notch microphone chefs serving up some absolutely delicious Hip-Hop food for thought.

At a smooth 14 tracks, “Supreme Aftermath” has got it all, introspection, geopolitics, social commentary and even a little battle rhyme. It kicks off with the haunting “Supreme Aftermath”, where our Beantown brawlers go hard on Islamophobia. Brother Yusuf goes ballistic, spitting: “They’re knocking down tombs and graves to exhume the remains/From now to doomsday we’ll say Ya Hussein (A.S.)!” It doesn’t let up from there as you’re taken on a journey of boom-bap classicalness that takes you back to when Hip-Hop was Hip-Hop, i.e. when mic-crushers crushed mics over hard tracks and taught you a little something too. Legendary emcees Gift of Gab, Divine Styler, Planet Asia, Shabazz The Disciple, Krumb Snatcha (on the outro, “Where’s Justice?”, a tremendously fly Boston-Boston hook-up) and more stop by for memorable guest appearances along the way, taking the true school flavor of the album to otherworldly levels.

But Blak Madeen is at its best when it’s just Yusuf Abdul-Mateen and Al-J riding dolo; like the 7th joint, Energetic Darts, where Al-J just obliterates it, “Never sunk my teeth into poison fruit/Anointing the truth, refuse to let my voice be exploited for loot/”. My personal favorite joint and arguably the record’s most powerful is “Blood Of Our Brothers”, in which we hear the Bostonian beat-smashers in full international solidarity mode. Akh Yusuf in particular lets it all hang out, “You know my theme thoroughly anti-Zionist/I’m a Black-boned White MC, you know the sciences!”, and elsewhere, sun reps for our Yemeni brethren in no uncertain terms, “You can’t miss this, spit truth to devils/Doing late-night reading about the Houthi rebels/Zaydi freedom fighters going hard in Yemen/Hip-Hop graffiti writers count down to Armageddon/”. Fire! Each of the brothers’ solo joints, Al-J’s “No Surrender” and Yusuf’s “Experience The Struggle”, blaze as well. In reality, no hyperbole, the whole album is a modern-day Hip-Hop classic. Truly, it KNOCKS, and truly, it deserves all the accolades it has already received and infinitely more than that. These cats can spit and they ain’t ‘bout nothing but uplifting our people from the doldrums. Does it get any better?

Al-J and Yusuf linked up in ‘05, formed Blak Madeen in ‘07 and up until now, with “Supreme Aftermath” included, they have 3 albums out plus an EP with Tragedy Khadafi. Y’all need to get up on these cats ASAP. Knock the new joint (and the old ones too) on Soundcloud. Cop it on iTunes. Bang it on your blocks. Let it sizzle in your headphones. Just support ‘em. With so much pollution currently bogging Hip-Hop down, not just the mainstream garbage pushed by the devilish, Jewish-controlled bigwig labels that we all know about, but the pretenders on the underground swearing up and down that they’re “revolutionaries” and “saviors of the oppressed”, when they’re actually even more devious and dangerous than their above-ground cohorts, Blak Madeen, like Rafiqi Green, Khanverse and yours truly, is more than a breath of clean, revitalizing air. These cats are beams of light. And if you’re rocking with the idea that darkness must die in the presence of its polar opposite, then let Yusuf Abdul-Mateen and Al-J in; let ‘em into your lives, let ‘em into your ears, and let ‘em shine. Let ’em shine, shine and shine some more… Preferably at rather obscene volumes.