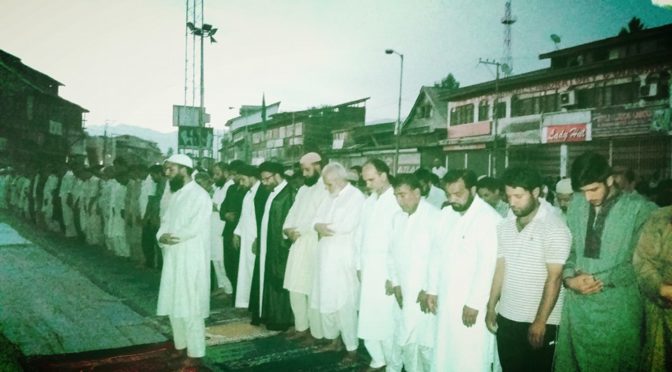 This is a MASSIVE slap-in-the-face to all Hindutvadi propagandists and “leftist” Indian commentators (of Hindu background and otherwise) nonsensically attempting to paint the Kashmiris’ Azadi struggle as some sort of Pakistani-orchestrated, Wahhabi-Takfiri terrorist operation launched to destabilize the Indian state. Either their perception is completely warped or all that cash from Modi The Murderer’s regime (and the equally brutal Singh regime before it) has turned their brains into mush, because this narrative simply doesn’t hold any weight under even the slightest scrutiny. Indeed, despite all the petrodollars that the Saudi Kingdom of Darkness has been disseminating across the Vale as of late to plant the seeds of division, and despite RAW’s support for all sorts of terrorists to undermine the legitimate demands and resistance of both the majority unarmed stone-pelters and minority armed moujahideen–including the recent operation concocted with Mossad to open the door for an ISIS chapter in Kashmir–Kashmiris of every Islamic school of thought are united in the face of the Hindu supremacist occupation. In other words, the efforts of the Hindutvadi Colossus and its oppression partners to establish a Takfiri breeding ground in the Vale and break apart the Kashmiri Resistance have failed.

Yes, it’s definitely safe to say that “We Are One Hand!” no longer applies only to Iraq, as the Kashmiri people have got the concept down pat. And like my Mesopotamian countrymen who stand together against Zio-Imperialism and its Daeshi Frankenstein, seeing the Kashmiris pray, protest and resist Hindutva’s terrorism as one nation and one people truly is a most marvelous, most gorgeous sight to behold. #‎LongLiveKashmir‬ ‪#‎FreeKashmir‬ ‪#‎AzadiRightNow‬ #WeAreOneHand