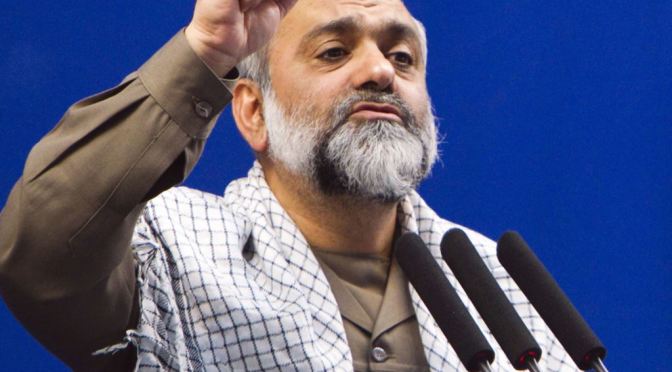 TEHRAN (FNA) – Commander of Iran’s Basij (volunteer) force Brigadier General Mohammad Reza Naqdi said millions of Iranian people are ready to be sent to Gaza to help the Palestinians in their fight against the Zionist regime.

“Millions of Basijis (volunteer forces) are ready in Iran to be dispatched to Syria and Gaza and they have come to us (for registration),” Naqdi said in a press conference in Tehran on Monday.

He had also earlier stated the same, but underlined that “there is no need to dispatch troops to Gaza” as Palestinian youth are enough to battle the Israelis.

Also in an interview on Sunday, he elaborated on Iran’s plans to arm the West Bank like the Gaza Strip to defend itself against the Israeli attacks, and said, “The most serious job is that they need to receive the necessary trainings and skills, as today, Gaza has its own defensive industry and they have stood on their feet, we also try to implement the same plan in the West Bank, God willing.”

His remarks came after Supreme Leader of the Islamic Revolution Ayatollah Seyed Ali Khamenei Khamenei strongly condemned Israel’s recent 51-day war on Gaza, and underlined that Palestinians, including those in the West Bank, should continue their armed struggle against Tel Aviv.

“We believe the West Bank, too, should be armed just like Gaza and those who are interested in the fate of the Palestinians must work in this respect so that the pains and miseries of the Palestinian people will be decreased due to their mighty hands and the weakness of the Zionist enemy,” he underlined in July.

After the Leader’s order, other Iranian officials also underscored the necessity for arming the Palestinians in the West Bank, saying that the move would lead to Israel’s collapse.

“The continued war in Gaza will accelerate arming the West Bank and annihilation of the occupiers,” Deputy Chief of Staff of the Iranian Armed Forces Brigadier General Massoud Jazzayeri said in Tehran in August.

“The holy Quds occupiers’ fear from arming the people and the resistance movement in the West Bank shows how deeply Tel Aviv is vulnerable to the start of a new phase of (Palestinians’) fight and resistance,” he added.

Jazzayeri said during the past decade and after the Zionist regime’s defeats in the 33-day, 8-day and 22-day wars in Lebanon and Gaza and the recent war against the Palestinians, the world public opinion has become aware of this bitter reality that the usurper Israeli regime is a cancerous tumor.