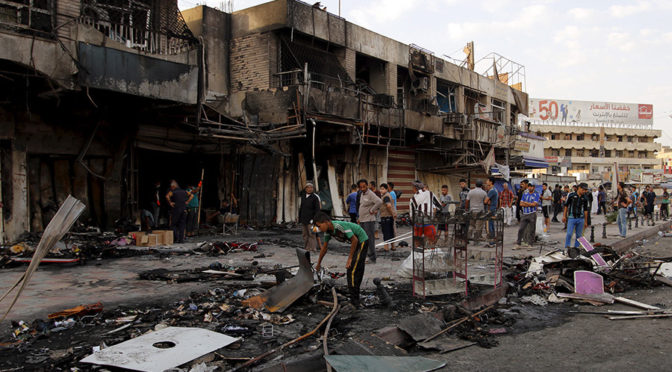 ISIS’s Ramadan Massacre of Muslim civilians (particularly those of the Shi’a school of thought) continues with more slaughtered in Iraq today. Double car bombs ripped through the town of Taji and the predominantly Shi’a eastern Baghdad neighborhood of Jadida. Casualty count is at least 31 martyrs and over 70 others wounded. Even the most wondrous of wit, the worthiest of wordsmiths, the most anomalous of authors and the most methodical of maestros sometimes hit a block in their ability to express and describe, and I feel like I have just entered that sphere; I have run out of creative, poetic, eloquent ways to say how much I hate Daesh and its American-‘Israeli’-Saudi backers with all of my heart and my soul and every fiber of my being. So I’m just going to say it the way it needs to be said… From my guts: I HATE THESE GOD-FORSAKEN TAKFIRI MOTHERFUCKERS AND I PRAY THEY WILL BE EXTERMINATED OFF THE FACE OF THE PLANET.

Time to toss out the rehabilitation courses and the deprogramming operations. Time to fling out the “hopes” that one day they will realize the error of their ways and rejoin humanity. Time to say to hell with all this bullshit. Whether it’s the Takfiris of MossadDaesh themselves, the Saddamist-Baathists along for the ride, the incubators who allowed this scourge to grow in their communities because they’re brainwashed Wahhabi halfwits who hate we Shi’a more than they like being alive, the ‘Israeli’, Turkish, American, Saudi and Qatari intelligence officials embedded with this filth, or all of the damn above, it seriously doesn’t matter. They all gotta go. They all gotta be crushed. They all gotta be sent to Jahannam where they belong. And fuck the “Palestine Solidarity Movement” and “human rights” activist subverters who will predictably call me “extreme” or “insane”. I’m so sick to death of these Judaized hypocrites; so sick to death of the harming of innocents; so sick to death of waking up every morning with the weight of a piano in my chest over the ungodly possibility of my countrymen being murdered like dogs in a pound; like our blood is cheap. And this doesn’t just apply to Iraq but also Syria where fake “ceasefires” are handcuffing Resistance forces as well as Yemen where Al-Saud can’t even exchange prisoners without some act of skullduggery that undermines the so-called “diplomatic” process. Fuck the diplomacy already.

All of us, Iraqis, Syrians and Yemenis, need to take a page right out of Hafez al-Assad’s playbook and march into each and every Saudi-linked Takfiri stronghold like the great Syrian leader did in Hama in 1982 and just obliterate every last of these maniacs. It has to be done. Not just for each of our respective homelands or even our region, but for Islam itself. This is essentially Karbala on Ashoura in 61 A.H. And if we’re not as defiant as Imam Hussein (A.S.) was, then all will be lost. No hyperbole. And anyone who is more offended by my swearing–because I “shouldn’t be using bad language as it is Ramadan”–more so than they are over dozens of Iraqis being slaughtered today by degenerate Zionist tools pretending to be Muslims, well… Guess what? Fuck you too you spineless, colonized, mealy-mouthed twerps. May all of our martyrs rest in eternal, blissful salaam.