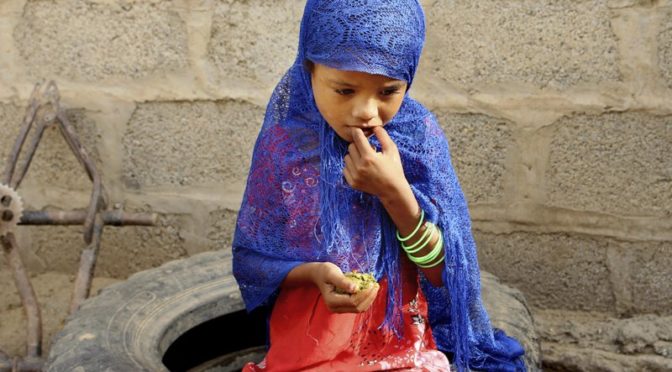 Yemen will go down in the record books for all the excruciating ways it breaks our hearts. In the Aslam district of Hajjah in the Yemeni north where Saudi Arabia and the UAE are besieging (like the rest of the country) and have bombed, re-bombed and then bombed some more, the people are gathering portions of leaves off Arabian Wax Leaf vines and boiling them into a sour paste just so they can survive the siege. Hajjah has seen severe acute malnutrition skyrocket this year, with 17,000 cases in the first six months alone–and 1,319 of those cases are children in Aslam. The district is a dystopian nightmare, as parents of suffering, starving kids don’t even have enough money to buy diapers and the main health center is out of pediatricians, electricity, fuel and oxygen cylinders. Pictures and videos have made it into mainstream media and alternative media. Looking and watching puts your soul through a meat-grinder. There aren’t enough curses to be uttered in the Mother Tongue or the Colonialist Tongue that would suffice for Riyadh and Abu Dhabi for what they’ve done to Yemen.

However, there will not be any saluting of the Associated Press “reporters” who broke the story. For they generically blame the abominable food insecurity felt by innocents in Aslam, Hajjah and all of Yemen on “the war” in one stage of their coverage and in another, they use the ever-present “anonymous source” to criticize the Yemeni Islamic Resistance for unfairly distributing aid out of–GET THIS–what can only be described as RACISM. They didn’t use the word but it was implied with extreme strength. As if Ansarullah isn’t comprised of moujahideen who are the poorest of the poor and Brown and Black themselves. As if Sayyed Abdul Malik al-Houthi himself isn’t starving too. As if Hajjah isn’t home to Ansarullahi moujahideen and their families. As if Hajjah hasn’t been defended by Ansarullah. As if Ansarullah hasn’t given martyrs from Hajjah. As if civilians in Hajjah–and Aslam particularly–don’t support Ansarullah. And as if Yemen along with its Zaydi-Husseini guardians haven’t been deliberately ignored for years by ACTUAL racist “Arabs” and “Muslims” for their very Brownness and Blackness. Calling such accusations–which are beyond baseless, they’re insulting for all the reasons just mentioned–disgraceful is an insult to disgraces. Calling such vomit shameful would cheapen the meaning of the word.

This is vile. Odious. Calculated. And Zionist. This is part and parcel of the ongoing Yahoudling media war against the Houthiyeen and their allies in the Yemeni Armed Forces. Zio-MSM wants the world to think there’s a moral equivalency with the invaders and the resistors; the oppressors and the oppressed; the starvers and the starving; the Saudi-UAE coalition of cowards that is backed by the US-‘Israeli’ Empire and which bombs babies from thousands of feet up in the sky with the Yemeni Islamic Resistance that is backed by nothing and nobody but God Almighty. Needless to say… For the notebooks… There isn’t.

A word of wisdom to the the liars and the distorters at AP: The Black and Brown Yemenis of Hajjah’s Aslam are forced to eat leafy paste as a means of barely keeping starvation at bay because SAUDI ARABIA HAS DESTROYED THEIR ENTIRE COUNTRY WITH A MASSIVE BOMBING CAMPAIGN AND IS MAINTAINING A TOTAL LAND-AIR-SEA BLOCKADE ON EVERY INCH OF YEMEN WHICH PREVENTS FOOD FROM REACHING ANYONE IN NEED. And the Wahhabi tyrants have been doing this for three and a half years with the uninterrupted help of Washington, London, Ottawa, Paris, Canberra, Berlin, Madrid and “Tel Aviv”. It ain’t “the war”–like “the war” is a living, breathing entity that takes orders from high-powered overlords– and it sure ain’t Ansarullah either. It’s Al-Saud, the Maktoum-Nahyan demons and their masters. Next time, spend that grant money allegedly given to produce this “report” on finding some dignity which would guide you to telling the whole truth.

Seeing the people of Aslam in such dire straits brings back memories of Western-GCC-Zionist atrocity propaganda against the Syrian Arab Republic, in which the likes of Qatari Al-Jazeera and Zionist devil Rupert Murdoch’s Sky News, among many others, told the globe that in Darayya, Madaya and Deir Ezzor, “the Syrian people” were eating grass and flowers and dead cats because of “siege” policies implemented by the Syrian Arab Army and Hizbullah. In reality, such stories were just that… STORIES, concocted in the bowels of Langley and “Herzliya” then fed to their assets in the Anglo and Arab media spheres for mass consumption by the Goyim/Sheep/Lemmings. In other words… Crazy-fake news brought to you by the shady snake Jews and their mangy ape tools.

Moreover, it was the Takfiri terrorists occupying each of these areas who confiscated aid in the tens of tons. And the Syrian people wanted them out at all costs, staging demonstrations in support of Syria’s defenders–you know, the alleged “besiegers”–to liberate them. Madaya was especially bad, with photos of backgrounds and children not even in Syria thrown into the mix to demonize and deflect. With both Yemen and Syria, we see the Zionist media using civilian suffering–fraudulent on the Syrian front, real on the Yemeni front–as a weaponized mechanism to target actors opposed to Zio-Imperialism, i.e. Syrian President Bashar al-Assad and Ansarullah. We’ve seen before just how low the Jewish-controlled corporate press and NGO-human-rights-industrial complex will go to manufacture hasbara about Yemen’s guardians, from Amnesty (read: Shamnesty) International inventing “human rights abuses” by Ansarullah to the Qatari despot’s Al-Jazeera claiming Yemeni Islamic Resistance commanders Sayyed Abou Ali Abdallah al-Hakim al-Houthi and Yousuf al-Madani had been killed.

What is most gut-wrenching of all is that the plight of Aslam and all Yemenis ***NEEDS*** to be in the public eye. Citizens worldwide ***NEED*** to know what’s happening in Yemen so they can join the struggle to stop this cruel, genocidal and criminal war. But justice is not done when the real culprits aren’t taken to task. That’s the opposite of justice as it prolongs the conflict and casts the villains as the heroes and the heroes as the villains. This isn’t acceptable. Al-Saud and its Zio-Imperialist partners are the perpetrators of the horror scene in Yemen. Al-Saud and its Zio-Imperialist partners are who must be exposed, lambasted and punished. Ansarullah is all that is keeping these monsters, child-maimers and bloodthirsty hate-mongers from taking over Yemen and installing a Saudi-style dictatorship. Stop the bombing. Stop the besiegement. Withdraw the occupation forces. Let the humanitarian aid in. Lock up the traitor Abed Rabbo Mansour Hadi, who dines on designer cake in New York while his countrymen starve. Leave Yemen the hell alone. This isn’t electromagnetic field theory. It’s simply what’s right. And for the sake of the unspeakably afflicted Yemenis in Aslam and everywhere else in the land once known as Saba… It is what ***NEEDS*** to be done. Not later. Not tomorrow. Not shortly. Now. Right. Damn. Now.