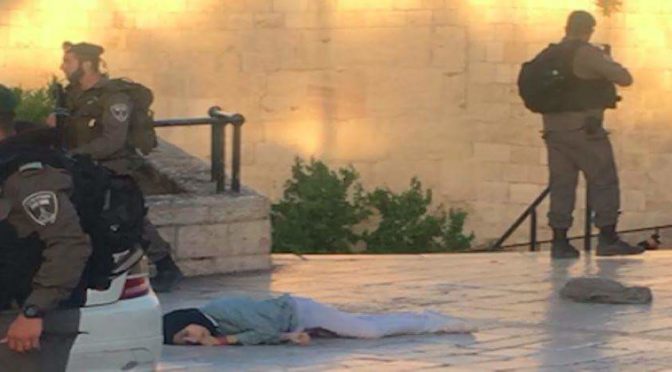 While the whole world was blithering and blathering about what scumbag was going to run France, a colonialist terror state which is still strangling 14 of its former African colonies with a “French Empire tax”, the usurping Zionist entity, which owns the asses of both the winner Macron and the loser Le Pen, murdered 16-year old Palestinian girl Fatima Afif Abdur Rahman Hjeiji in occupied Al-Quds. Originally from the village of Qarawat Bani Zeid near Ramallah, the young sister was gunned down in cold blood by Jewish occupation thugs, who shot her twenty times. Let me repeat that… TWENTY FUCKING TIMES. Think you’ve seen this before? You have. Does the name Iman Darwish al-Hams ring a bell? It should. She’s the 13-year old Palestinian girl from Rafah murdered on October 5th, 2004 in the midst of the Second Intifada in the exact same fashion as Shahideh Fatima was butchered today–only Shahideh Iman got 17 bullets in her tiny frame. These bloodthirsty supremacist demons who enjoy mowing down little girls with entire magazines are the very same creatures who “Anti-Zionist” Jews and brainwashed, colonized Muslims want Palestinians to live side-by-side with forever in a “one state solution”. Get this through your thick skulls: The concept of Satan-spawned ‘Israelis’ ever living in harmony in our region is as ridiculous as consuming nothing but sugar for a few months and expecting to look like Tyson in his prime when you’re all done.

‘Israel’ unleashed the “Arab Spring” to throw Anti-Imperialists off their game and keep the entirety of the Arab-Islamic world preoccupied with Takfiri terrorism. ‘Israel’ has now activated a kosher-nationalist “revolution” in the West to throw real nationalists off their game and keep the “clash of civilizations” alive and well. All of it is to make the Question of Palestine secondary; to make the murder of children, the theft of land, the destruction of olive trees, the expansionism, the plunder of resources, the ethnic cleansing and the desecration of Islamic and Christian sanctities… SECONDARY. ‘Israel’ does not want us talking about Palestine, looking at Palestine, or even thinking about Palestine. Indeed, when we make Palestine our compass, the Zionists DIE a most violent demise inside their rotten beings. We mustn’t forget this. Regardless of this or that national or international struggle, we mustn’t push the liberation of Palestine from the River to the Sea, with every Jewish settler sent back from whence they came, aside. So I’m gonna say this ’till y’all drop the Judaized “apartheid” discourse and leave the “two-state solution” and its newer, shinier, more deceptive counterpart the “one-state solution” behind in history’s garbage dump: Death to the muhfuckin’ Halakhic-Talmudic tumor. Death to Zion. Death to ‘Israel’. Ending this horrible cancer is the only option for Palestine and the whole of the Holy Land to ever return to salaam and security.