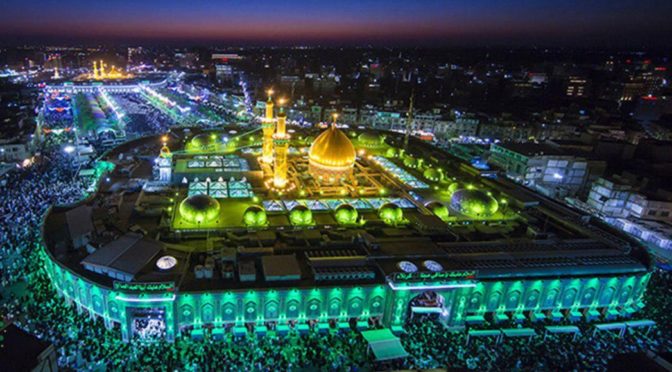 Palestinians and Kashmiris. Nigerians and Yemenis. Iraqis and Iranians. Syrians and Lebanese. Hijazis and Afghanis. Kuwaitis and Bahrainis. Indians and Pakistanis. Americans, Canadians, Australians and Europeans. Russians and Chinese. Ghanaians and Cameroonians. Moroccans and Egyptians. Tunisians and Algerians. Tajikistanis and Bangladeshis. Mauritanians and Malians. Georgians and Armenians. Muslims of every stripe. Christians of all sorts. Some Hindus. A few Sikhs. And scores of non-denominational believers. Everyone gathered on the plains where Imam Hussein (A.S.), his family and the Karbala 72 were massacred by the despotic demon Yazid (L.A.) to honor the Shouhada and stand with the truth against falsehood; the oppressed against the oppressors; justice against injustice; and the Axis of Resistance against Empire Zionica. This is the first Arbaeen since the defeat of ISIS aka MossadDaesh on Iraqi soil and contrary to the predictions of the “experts”–read: Orientalist propagandists who know as much about Iraq, Shi’a Muslims and Islamic history as they do about integer factorization and algorithmic anomalies–it is bigger than ever before. It’s in moments like these that we need to look beyond Lady Zaynab (A.S.) in all her resistant and pristine glory being reunited with Aba Abdallah (A.S.) 40 days after he was butchered by the enemies of Rasoulallah (S.A.W.W.); beyond the initial righteous pilgrimage of Jabir ibn Abdallah (R.A.) While these were stunning and profound moments that deserve attention, reflection and analysis, we should see how they apply to the here and now in our current struggle. Yes, Arbaeen is peace–the peace of Ahlul Bayt (A.S.) triumphing over the violence of the Yahoudi-backed Umayyads. Yes, Arabeen is love–the love of enjoining good and forbidding evil that the lives of Imam Hussein (A.S.) and his Caravan represented in the cores of their very beings; the love of Islam; and the love of humanity, hence why they so willingly sacrificed themselves to preserve the message of Muhammad al-Moustafa (S.A.W.W.) during a time when drunkards and derelicts reigned. But it is still something MORE. Arbaeen is Palestinian heroine Ahed Tamimi declaring “Everyone should be slapping ‘Israeli’ soldiers.” Arbaeen is the Kashmiri mother encouraging her remaining children to pelt stones at the Hindutvadi occupiers after burying several sons already. Arbaeen is the moujahideen of Ansarullah launching missiles and drones on faraway targets in the UAE and the Saudi-occupied Hijaz to avenge the massacred and starved martyrs across Yemen. Arbaeen is the militancy of Hizbullah, the Iraqi Islamic Resistance, the IRGC, the Fatemiyoun and the Zaynabyoun–the likes of which defend not only Syria from Zionism and Takfirism but the whole unforgiving world. Arbaeen is Syrian President Dr. Bashar al-Assad adhering to the will of his people to fight the Zionist Imperium and his wife, First Lady Asma, battling cancer inside her homeland alongside her fellow citizens afflicted with the same illness. Arbaeen is every individual, regardless of their ethnic, national or religious background, thumbing their noses at the ZOGs and the Organized Jewish Interests that control them, always striving for haqq no matter who it offends and never accepting a regime of thought crime. After all, Imam Hussein (A.S.) did say, “If you have no religion and do not believe in the Hereafter, then at least be free from tyranny, oppression and arrogance.” Therefore, Arbaeen is the completion of the aforementioned paradox of tragedy and triumph that is Ashoura. Tragedy because of the unspeakable bloodshed and desecration of one of Islam’s Two Weighty Things –Ahlul Bayt (A.S.) And triumph because it was the Plasma of Hussein (A.S.) that cleansed the filth of Yazid (L.A.) and his oppressive, regressive, toxic, noxious dictatorship and preserved Islam for all the generations to come. Arbaeen is the renewal of the vow that Sayyed al-Shouhada (A.S.) made on the 10th of Muharram: “Hayhat minna zilla (Us? Humiliated?! Never, ever!)” It’s a call to revolution. It’s a rejection of normalization with a Dajjalic status quo. One cannot be Husseini, Zaynabi, Mukhtari or Zaydi if they do not rise up against the Yazid (L.A.) of their time. Today, that tyrant is the Rothschild Octopus. You will be judged on how you interface with it: As a collaborator or as a resistor. There isn’t an in-between. “Quietists” fall in the former category because as the Imam (A.S.) said, “Those who are silent when others are oppressed are guilty of oppression themselves.” So no doubt that in such a scenario, Hussein (A.S.) would be as driven against the Zionist Imperium as he was against Ibn Mouawiyah (L.A.), if not more so. No doubt at all. Striking Star Salute to all those who made the journey from the four corners of God’s Green Earth. And one more Striking Star Salute to the moujahideen of the Resistance Axis in Syria and Iraq who defended the shrines with their very lives, stopping the Zio-Takfiris from ever getting near them. If Imam Hussein (A.S.) had men such as these behind him instead of the two-faced traitors of Kufa, the world, and particularly the Islamicate, would be a much different–not to mention much better–place as of this very moment. May they be rewarded for their unparalleled sacrifices and their indescribable heroism. Long live the revolution of Sayyed al-Shouhada (A.S.), Abou Fadhl al-Abbas (A.S.) and Lady Zaynab, the Maiden of Mouqawamah (A.S.) 1,338 years and counting.