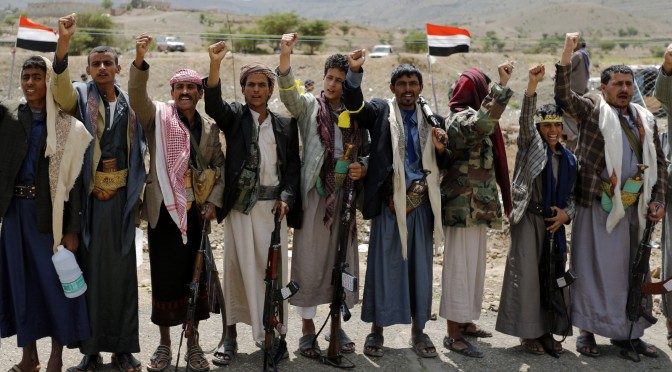 “The sanctions are unjust, unethical, and illogical,” Mohammad al-Bukhaiti said, stressing that Ansarullah believes that nothing good can come of the Security Council.

Worthy to note that Ansarullah has been calling the Yemeni political parties to meet for a national dialogue before the beginning of the Saudi-led aggression, in a bid to solve the domestic crisis without foreign interference.

“Council resolutions are never based on ethical or logical considerations,” he added.

Bukhaiti said the UNSC should have issued a resolution suspending the aggression against Yemen that targeted the country’s infrastructure.

On Wednesday, the Security Council imposed sanctions on the Houthi group and the son of former Yemeni President Ali Abdullah Saleh.

It also imposed an embargo on weapon supplies to the group, opening the door for a wide military campaign against Yemen without allowing the people to defend themselves.

Bukhaiti, for his part, said that the Popular Committees and the Army will not abide by the decision.

“The Yemeni people will carry out their will,” he emphasized.

A coalition of 10 countries, led by the Saudi Arabia and supported financially and militarily by the United States, launched three weeks ago a wide military offensive on Yemen, killing 20 civilians in one attack, wounding hundreds and causing so much destruction across the state.

Media outlets reported that Saudi Arabia has deployed “100 fighter jets, 150,000 soldiers and other navy units” for the military campaign against Yemen. It also sent 5000 takfiri terrorists to fight against the Yemeni army.

The national military – supported by the Popular Committees – has launched a wide-scale campaign in the attack-hit areas, and managed to drive al-Qaeda and ISIL terrorists out of main neighborhoods of Aden and Sanaa.

The Kingdom of Saudi Arabia is known for training and funding takfiri groups and sending them to the conflict-hit zones in the Arab and Muslim world, including Syria, Afghanistan and now in Yemen.