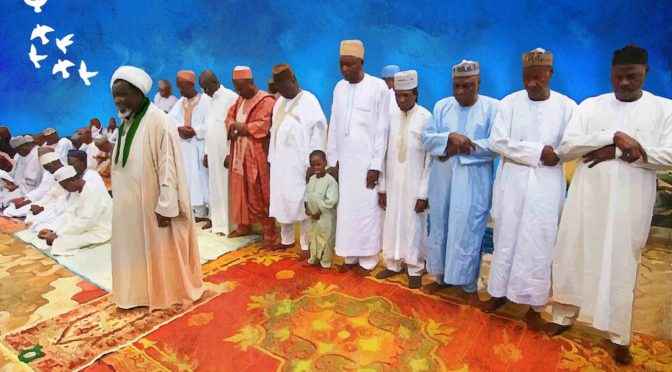 Muhammadu Buhari, the tyrant of Nigeria barely clinging to power thanks to a “democratic” veneer, just can’t stop persecuting the Nigerian Shi’a community led by Sheikh Ibrahim Yaqoub al-Zakzaky’s Islamic Movement of Nigeria. With just 48 hours before Arbaeen, in which tens of millions of Shi’a Muslims, Sunni Muslims, Sufi Muslims, Christians and many others flock from all around the world to Karbala to honor Imam Hussein (A.S.), the “democratic” despot’s trigger-happy, bloodthirsty, US-‘Israeli’-Saudi-backed military opened fire on the imprisoned Sheikh’s partisans as they marched through Zuba on the outskirts of the Nigerian capital of Abuja in what they’re calling the “Arbaeen Symbolic Trek”–to show solidarity with their brethren in Iraq and of course call for the freedom of Sheikh Zakzaky. At least 10 innocents were martyred and scores more were wounded. The followers of Africa’s Khomeini have vowed to continue their quest for the next 72 hours, declaring that nothing, including the Buhari dictatorship’s bullets, will keep them from Sayyed al-Shouhada (A.S.)

You don’t need a political science degree to know what this is. Buhari and his gang of neoliberal “elites” are shook up like Muhammad Ali (R.A.) just punched every last one of them flush on the jaw from the massive Sunni-Shi’a joint protest for Zakzaky’s freedom just a few weeks ago. The illegitimate regime has constantly and falsely depicted the Islamic Movement of Nigeria as a “Shi’a project” as well as “Iranian expansionism”–rhetoric right out of the bowels of “Tel Aviv”, “Herzliya” and Riyadh. But if Sunnis join in the Arbaeen Symbolic Trek as well as Christians, as they have with past events, then the US-‘Israeli’-Saudi stooges’ hasbara goes down the drain a little bit further and they may have a full-blown rebellion on their hands. And there’s no force more unifying than Aba Abdallah (A.S.) on the occasion of Arbaeen. So instead of just staying out of it or doing the right thing and adhering to the people’s demands by releasing Zakzaky, his wife Sayyeda Zeenat and all of the Islamic Movement of Nigeria’s political prisoners, Buhari does what he’s been doing… Committing massacres. He’s the Fulani version of Yazid (L.A.), simple and plain. From the genocide in Zaria nearly 35 months ago to right this second, all he’s done is spill innocent blood.

And where are “the Muslims”? Hmmm? The “lions of the Ummah”? The “vanguard of Deen al-Fitra”? Can’t find ’em. They’re on vacation. They took a powder. Incommunicado. AWOL. Ghost. Owherenay otay ebay oundfay–Pig Latin for a bunch of cowardly pigs. A silence that is both sickening and deafening; nauseating and hideous. No calls to action from ISNA. No press releases from CAIR. It’s as if the Islamic Movement of Nigeria, the most important Islamic Liberationist organization in all of Africa and one of the key Mouqawamist-Revolutionary infrastructures on the face of this planet, doesn’t exist to these so-called “believers”. We’ve said it more than 1,000 times in the last several years… It doesn’t get anymore shameful. I’ll tell you what though: Tell “the Muslims” that a bunch of Zionist Jews or homosexuals… Or better yet, Zionist Jews ***AND*** homosexuals just got butchered by a US-‘Israeli’-Saudi-backed tyrant, they’ll be front and center with their “Buhari Must Go!” t-shirts on. BELIEVE ME.

May all the hypocrites be damned. May all the collaborators, starting with Buhari, meet a most fiery end. May the Arbaeen Symbolic Trek martyrs rest eternally in serene green pastures. May ALLAH (SWT) protect those courageous souls going back out on the streets tomorrow. And may Zakzaky be freed immediately. Ya Hussein (A.S.) Ya Zaynab (A.S.) Ya Abbas (A.S.) Ya Zayn al-Abideen (A.S.)