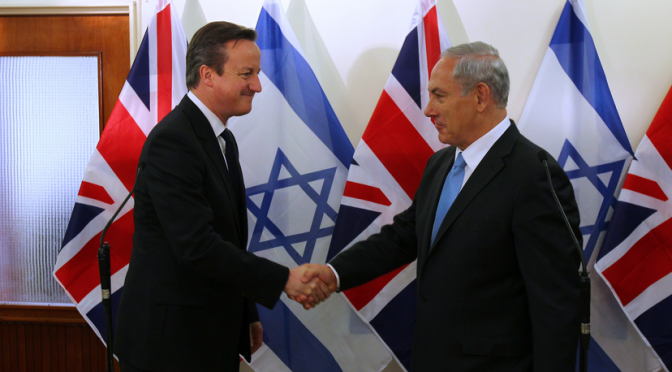 While speaking to a 500-strong group of Jewish lobbyists in London in 2007, UK Prime Minister David Cameron declared,(1) “I am a Zionist“. He went on to add, “I’m not just a good friend of Israel but I am, as you put it, good for Jews.”

These comments can easily be explained merely as fawning attempts to placate and appease the Jewish lobby – a necessary step for any who wish to assume high office. One has to ask the question though: why does ‘Anglican’ David Cameron conceal his own Jewish identity?

David Cameron is not merely of Jewish descent; he hails from a bloodline that can fairly be described as Jewish royalty, yet he claims never to have known this. As he spoke to the Movement for Reform Judaism in 2010 he described his learning of his Jewish ancestry(2) as the “highlight” of his year.

While studying the Cameron family tree in 2009,(3) Dr Yaakov Wise – a University of Manchester historian who specialises in Jewish history – found that David Cameron is descended from a highly distinguished Jewish family line (emphases added):

And according to Dr Wise, who has been using archival material to examine the Cameron family tree, the Tory leader could also be a direct descendent of the greatest ever Hebrew prophet, Moses.

During the last years of his life Elijah Levita produced, among other works, two major books: the 1541 Translator’s Book, the first dictionary of the Targums or Aramaic commentaries on the Hebrew Bible.

His lexicon of 1542 explained much of the Mishnaic Hebrew language and was a supplement to two important earlier dictionaries.

Elijah Levita also wrote what is thought to be the first ever Yiddish novel – called the Bove-bukh (The Book of Bove) written in 1507 and printed in 1541.

The book is based on an Italian version of an Anglo-Norman tale about a queen who betrays her husband and causes his death.

Emile Levita, who was granted citizenship in 1871, is Cameron’s great great grandfather.

Cameron’s great-great grandfather, Emile Levita was a German Jewish financier who emigrated to Britain and obtained British citizenship in 1871. Levita was the director of the Chartered Bank of India, Australia and China which in 1969 became Standard Chartered Bank. Levita himself is descended from Elijah Levita, a Jewish scholar of out-and-out luminary status whose writings included not only a dictionary explaining much of the Talmudic Hebrew language (or ‘Mishnaic Hebrew’), but the first ever Yiddish novel (Yiddish, meaning literally “Jewish” is a language of German Ashkenazi Jews written in the Hebrew alphabet).

Considering the sheer historical eminence of his ancestors, it would take real gullibility to believe that David Cameron ‘found out’ about his roots one year before he assumed office. The question is not ‘why did Cameron have no knowledge of his Jewish roots’, but rather, why would he conceal his Jewish identity?

A 2006 report by the Jewish Chronicle(4) cited here by Stuart Littlewood(5) perhaps goes some way in explaining this. The report titled ‘Team Cameron’s big Jewish backers‘ is a laundry list of powerful members of the Jewish community who donated over £1 million to David Cameron, explaining his inexplicable rise to power after a relatively mundane and unremarkable political career.

The biggest Jewish donor to the party while Mr Cameron has been leader is gaming magnate Lord Steinberg, who has donated £530,000, plus a loan of £250,000. Hedge-fund owner Stanley Fink has donated £103,000, even though he was a declared supporter of Mr Cameron’s leadership rival, Liam Fox. A further £250,000 has been loaned by philanthropist Dame Vivien Duffield.

During Mr Cameron’s campaign to lead his party, Jewish figures gave his team (as opposed to the party) additional donations of more than £60,000. According to the JC’s inquiries, direct donations to “Team Cameron” in the leadership battle came from philanthropist Trevor Pears (around £20,000), Bicom chair Poju Zabludowicz (£15,000 plus £25,000 to the party), Next chief executive Simon Wolfson (£10,000 plus £50,000 to the party), former Carlton TV boss Michael Green (£10,000) and Tory deputy treasurer and key Cameron fundraiser Andrew Feldman (£10,000 through his family firm, Jayroma).

Aside from these donations from powerful Jewish figures, a ‘small but influential’ group of Jewish Conservative officials and politicians were also ‘key players’ in Cameron’s campaign for leadership, the Jewish Chronicle report goes on to mention.(4)

In the aforementioned piece,(5) Stuart Littlewood makes an observation about the extent to which Jews are over-represented in the British parliament (emphases added):

While nobody is suggesting, I hope, that Jews have no place in our law-making, it is not unreasonable to wish the number to reflect their presence in the population. Three years ago the Jewish Chronicle published a list of Jewish MPs in Britain’s Parliament, naming 24. The Jewish population in the UK at that time was – and probably still is – around 280,000 or just under 0.5 per cent. There are 650 seats in the House of Commons so, on a proportional basis, Jews could expect three seats. But with 24 they were eight times over-represented. Which meant, of course, that other groups were under-represented.

The UK’s Muslim population is about 2.4 million or nearly 4 per cent. Similarly, their quota would be 25 seats but they had only eight – a serious shortfall. If Muslims were over-represented to the same extent as Jews (i.e. eight times) they’d have 200 seats. Imagine the hullabaloo.

Succeeded by David Cameron, the previous leader of the Conservative party, Michael Howard, is also Jewish,(7) as is the current leader of the UK Labour party, Ed Miliband.(8) Not bad going for a group that constitutes less than 0.5% of Britain’s population.

If the British public were to consider Cameron’s very real pursuance of Zionist policies in the context of his rise to power on the back of Jewish money, there would be a public awakening (which would no-doubt be labelled as ‘anti-Semitism’). In light of this, the decision to conceal his Jewish identity can easily be understood.

It is not democratic for a holder of high office to be put in place by the money of powerful political pressure groups. Nor is it democratic for one ethno-religious group to be grossly over-represented within the corridors of power.

If the interests of the Zionist regime and the powerful Jewish community were to conflict with those of the United Kingdom, who would David ‘I’m a Zionist‘ Cameron really represent? If the recent wars on Libya and Syria are anything to go by, this question need not be asked.