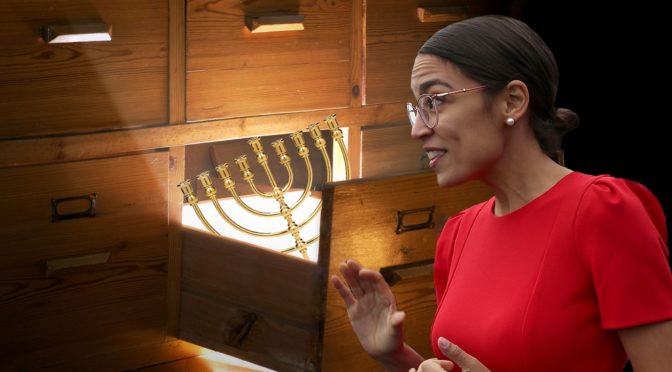 And even before entering the Zionist-occupied region known as the “US Congress”, it didn’t take Ocasio-Cortez anymore than about two entire seconds to backtrack on what was a timid position to begin with–she acknowledged Palestinians have been massacred by ‘Israel’ and condemned Trump’s Al-Quds embassy move, “stances” about as basic as “rape is evil” and “bombing children is wrong”–as a result of pressure from the Sahyouni establishment and the Sahyouni Jews in her district. She stated her belief in the genocidal Zio-Tumor’s “right” to occupy Palestine and vowed support for the “two-state solution”. She also said that she “may not use the right words” when it comes to ‘Israel’–yet another cowardly capitulation. Then again, maybe it’s just who she is. After all, in a “revelation” that totally “shook up” the Jewish community (read: it didn’t, they knew), Ocasio-Cortez unveiled that she was in fact Jewish, tracing her lineage back to 15th century Sephardic Jews [Marranos] and saying, “I knew it! I sensed it!” I bet she did. Puts a whole new dradle-spin on things, doesn’t it?

Since that moment, she failed COMPLETELY to back a woman who is supposedly her friend, comrade and “sister”, the Somali-American Junior Senator of Minnesota Ilhan Omar, who, despite her shady connections and problematic Westoxified positions on many an issue, has been raked over the coals for weeks by the Zionist Lobby due to her acknowledging the influence of AIPAC. Ocasio-Cortez was silent about it and then praised the “Jewish leadership” of all institutions when it was semi-over-with. She has also all but thrown her full weight behind the Trump-Abrams-Bolton-Netanyahu attempted coup in Venezuela, a Zionist op full-stop, moronically declaring that what’s taking place is a “failure of democracy” as well as “authoritarianism versus democracy.” As I said. She’s a fraud. There is no greater confirmation of one’s political two-timing and double-dealing though than the Almighty Shekel. Follow it and you’ll know whether any particular candidate, activist or artist has their bread buttered with a clean, organic spread or nasty Gefilte fish jelly. In the case of Ocasio-Cortez, she’s 100% rabbinically-certified KOSHER.

If you take a look at the page of Ocasio-Cortez on Open Secrets, you will find that her top donor is Columbia University–a base for Global Zionism. Despite histrionics from the Algemeiner about it being the “worst college for Jewish students in 2016”, Columbia sees 64% of its 1,500 Jewish undergraduate students maintaining a relationship with Zionist spy nest Hillel; of those 963 Jewish undergraduate students, 290 will be traveling to the usurping Judaic regime; it maintains a kosher meal plan for anyone who wants one and also has a robust Institute for ‘Israel’ and Jewish Studies; it hosts ‘Israeli’ war criminals like Nir Barakat; and, the kicker, it collaborates with ‘Israel’ in academic ventures more than every other university in all of the United Snakes except TWO schools. That makes every penny that Columbia gives to anyone… Zionist dough.

The sixth biggest donor to the campaign of Ocasio-Cortez is a company called Segal Ventures, run by Jewish businessman Evan J. Segal. This loathsome individual is a leadership advisor at the Community Day School Pittsburgh, where he brainwashes kids on how to support ‘Israel’, sits on Hillel’s Board of Directors/Board of Governors and has a place on the Jewish Federation of Greater Pittsburgh’s Management Committee, in which he and other Jews “raise and allocate funds” for ‘Israel’, among other Jewish supremacist activities. More Zionist cheddar… Noted. The 21st burliest donor to Ocasio-Cortez is none other than “progressive” watering hole MoveOn.org, which wouldn’t even exist without the cash of George Soros, Linda Pritzker (of Hyatt) and Peter B. Lewis (Democracy Alliance/Progressive Corp), three Yahoudlings widely known for their liberal and pro-‘Israel’ “activism”. That’s yet another dose of bigwig Zionist green in the mix.

But the bombshell of bombshells is the eighth largest donor to Ocasio-Cortez and her “resistance”: The terribly powerful, ultra-shadowy and unrelentingly evil corporate law firm of Skadden Arps, one of the central outposts of the Jewish-Zionist 9/11 conspiracy, as it controlled every lever of the litigation related to the crime, helping bury the truth on the one hand and getting all “chosenite” co-conspirators involved in the terror attack out of hot water on the other. Kenneth Bialkin, Sheila Birnbaum, Alvin Hellerstein, Amnon Shoham and Yadin Kaufman, each critical to the September 11th false flag event in their own way, are all bred by Skadden Arps. That means that Ocasio-Cortez, the US Representative for New York’s 14th congressional district, has taken money from the murderous Yahwehist psychopaths who butchered 2,996 New Yorkers on 9/11/01. It really doesn’t get any ungodlier than that.

Now ask yourself the following question: Does a woman who backs the war on Venezuela, abandons her friends when they need her most, betrays Palestine and takes money from some of the worst representatives of Dajjal on the face of God’s Green Earth have YOUR best interest at heart? Does she really want to make the planet a better place? Or is she just another identity politics Trojan Horse trotted out by World Zionism like Rashida Tlaib, designed to corrupt the consciousness of Latinos, especially Nuyoricans, into supporting whatever satanic agenda that the plutocratic, oligarchical, Halakhic-Talmudic establishment pumps out next?

She isn’t Dylcia Noemi Pagan. Nor is she Lolita Lebrón. She’s not Ruth Mary Reynolds either. And she damn sure isn’t Lola Muhammad (R.A.), the Nuyorican, Shi’a Muslim Revert wife of my late mentor, Randall Muhammad (R.A.), and a militant Puerto Rican nationalist who was working on a book about maximizing Latin independence struggles through Husseini-Khomeiniist Islam prior to her death. One wonders if Alexandria the Artifice even realizes that her homeland has been under US military occupation and subjected to cruel campaign of Imperialist terror for decades. Sarcasm aside, the bottom line is that Ocasio-Cortez, like everyone else in the American Congress, works for “Tel Aviv”–essentially a leftistani and more sophisticated version of Ileana Ros-Lehtinen. As documented in this essay, the “benjamins” prove this fact. Stop treating her like anything else but the tribalist ZOG operative that she is.

One thought on “Alexandria Ocasio-Cortez Is Bankrolled By Zionism, Including Major 9/11 Nexus Point Skadden Arps”