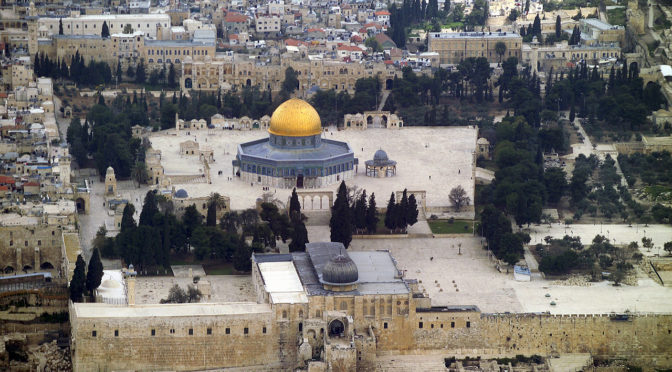 Jummah Mubarak brethen. Do keep Al-Aqsa in your du’a today because the usurping Zionist entity is yet again threatening Islam’s third holiest site in the name of its demonic “Third Temple”. As long as the ‘Israeli’ cancer exists, Al-Aqsa, Qoubbat al-Sakhrah and all Palestinian as well as regional sanctities are in grave danger. And with the chaos across the Arab-Islamic world raging thanks to the Mossad-sponsored likes of Daesh and other Takfiri gangs, this danger has never been greater because eyes aren’t focused on Palestine where they should be but on Zio-manufactured internal strife instead. With Jews worldwide marking the destruction of the Second Temple just a few days ago on the occasion of Tisha B’av–the 9th day of Av which is the 11th month after the Jewish New Year, and the “holiday” that Organized Jewry made manifest when they blew up the Twin Towers on September 11th and inaugurated their 100-year war on Islam–‘Israeli’ television broadcasted numerous reports about Jewish occupation organizations and institutions salivating over the prospect of destroying Al-Aqsa and building the “Third Temple” in its place; they were only awaiting an order from the “Tel Aviv” regime itself to move forward with this conspiracy.

Chief among these groups is a psychopathic Jewish supremacist band of bandits called “Women For The Temple”, who are actively laying the groundwork for this calamity, who have a plethora of support within IOF and who consider their criminal activities their “life’s work”. The lessons here aren’t difficult to discern. Firstly, Zionist settler women are just as culpable in every last indignity that the Palestinian people have endured for the last 130 some odd years as Zionist settler men. Judaism does indeed teach the vilest hatred towards women but when it comes to fighting the “Goyim”, Jewish males and females are on the same page. Secondly, ‘Israel’ and its parasitic, unbathed, unhinged, monstrous squatters aren’t making any bones about the fact that demolishing Al-Aqsa is on their agenda and the destruction of Gaza’s Omari Mosque along with the bulldozing of numerous ancient worship sites in Syria and Iraq by ‘Israel’s’ proxies were in fact test runs for this ultimate Dajjalic objective. And thirdly, death to ‘Israel’ and NOTHING BUT death to ‘Israel’–i.e. the dismantlement of the entity, removal of its nukes and the mass deportation of its colonizer population to a deserted island where they can never harm another living, breathing creature–is the only remedy for the tumor.

Death to ‘Israel’ means death to the conflict and death to the suffering of the Palestinian people. Death to ‘Israel’ means the resurrection of peace in the Holy Land and the preservation of Al-Aqsa and Qoubbat al-Sakhrah. Death to ‘Israel’ means LIFE for Palestine. And considering it is ‘Israel’ that is responsible for every drop of carnage from Nigeria to Libya, Egypt to Yemen, Iraq to Syria and beyond, death to ‘Israel’ means the restoration of calm in our region too. Palestine is our beloved and our compass and no matter what horror is occurring here or there, Palestine always helps us find our way back to the heart of things. ‘Till the liberation of Al-Quds, ’till the toppling of the artificial Zionist regime, ’till the Right of Return is implemented and there isn’t a single Jewish supremacist in sight from Al-Naqab to the border with Lebanon, we struggle onward. ‪#‎DeathToIsrael‬ ‪#‎Ta7yaFalasteen‬ ‪#‎ProtectAlAqsa‬