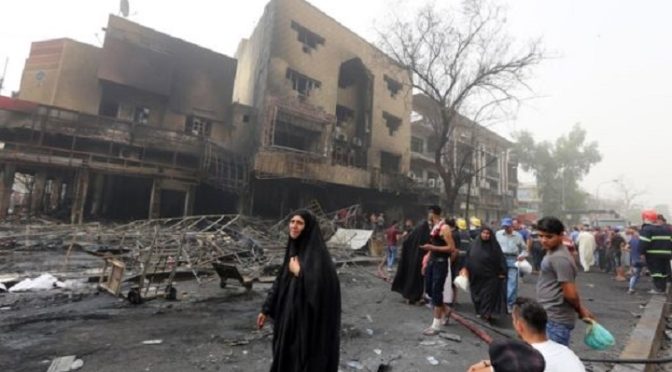 As the martyr count from MossadDaesh’s barbaric massacre in the Karrada and Shaab districts of Baghdad hits at least 213, I can’t help but notice that the same “Muslim” organizations and leaders who rushed to hold vigils for the 49 gays and lesbians shot up in the Zionist false flag in Orlando are completely silent. Not quiet. But silent. Also can’t help but notice that the same Jewish-financed LGBT degenerates who the aforementioned “Muslim” organizations and leaders said are our “brothers and sisters” in the “two-pronged struggle” against Islamophobia and “homophobia” happen to be completely silent as well. I wonder why that is, don’t you? Oh, come on! Aren’t you just the least bit curious?! Well. Even if you’re too scared to ask because God forbid a homosexual or an Ikhwanji gets his or her sensitivities disintegrated like the pathetically dainty little chrysanthemums that they are, I’m going to tell you why anyway!

Perhaps it’s because the “Muslim” organizations and leaders under the umbrella of CAIR aren’t really looking out for Muslims, nor are they looking to protect Islam from Western-Judaic perversions, nor do they give a fraction of a damn about Muslims and their struggles against Zio-Imperialism abroad, for they are in fact the fifth column of the GCC monarchies–particularly Al-Saud, Al-Thani and the UAE–in the West. And perhaps it’s because the LGBT “movement” is not about uplifting an oppressed people–these atrocious persons are not oppressed in any way, shape or form and wherever you find them, from New York City to Chicago, DC to South Florida, there’s prosperity in excess–but spreading decadence, distastefulness and deviance throughout Western society and Arab-Islamic society, specifically Iraq, where demonic gay pornography was played in movie theaters that US-Zionist occupation forces ransacked and took over in the opening weeks and months of the invasion.

There are no words for the 213 Iraqi martyrs and 200+ wounded of Karrada and Shaab from “Muslim” Brotherhood-infested CAIR and the Gay International because our dead and our injured don’t fit within the framework of their definition of “oppression”, which goes something along the lines of: If people can’t openly “preach” against the “unbelievers” and chop off the heads of Sunnis, Shi’a, Alawis and Christians as they please, then they’re being marginalized by a ruthless dictator and are victims of Islamophobia (in CAIR’s case); and if people can’t engage in graphic public sex, dress up men as women and women as men, and drag children into it too without any detraction whatsoever then they’re being marginalized by a cisgender heteronormative patriarchal power structure and are victims of homophobia (in LGBT’s case).

In other words, these people aren’t and weren’t ever our allies. Ever. Factually speaking, they’re the polar opposite of what a “comrade” is and it is beyond overdue that we say so out loud and fearlessly, the false, ADL-inspired accusations of homophobia and Islamophobia be damned. Organized Homosexuality–which spreads social fitnah and perversion–and the House Muslims–who spread “religious” fitnah and perversion through their Takfiri-sympathizing–have ALWAYS shilled for the US-‘Israeli’ Empire in one way or another, whether the file was Iraq, Syria, Yemen, Bahrain, Afghanistan, Pakistan, Libya, Somalia, occupied Palestine itself or elsewhere. And their deafening silence today, in the wake of one of the worst attacks in Iraqi history, is just one more confirmation of this longstanding reality.