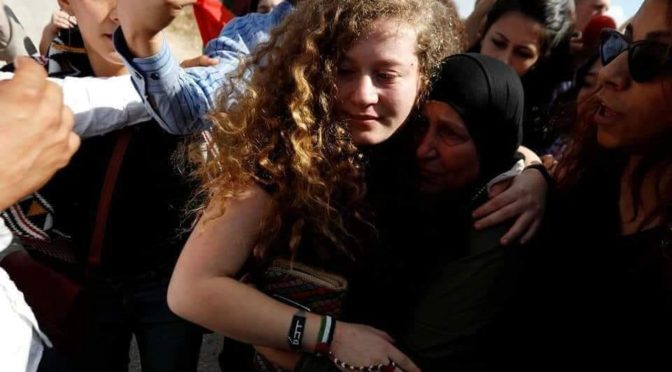 A triumph for Palestine, its precious cause and anyone across the world who has suffered at the hands of the ‘Israelis’ and their global power matrix: Ahed Tamimi, the valiant, frizzy-haired, iconic heroine of the Palestinian Resistance in the occupied West Bank, has finally been set free after spending the last 8 months in a Zionist dungeon. Uttering the words “Resistance will continue until the occupation ends” upon her departure alongside her mother and fellow resistor Nariman, the 17-year-old lioness was greeted by family and friends from the plucky, undefeated village of Nabi Saleh and put her enemies in “Tel Aviv” on notice that she plans to pick up right where she left off before they dragged her away to a cell–standing up for her people, her land, her ancestors and her culture no matter what the cost. Though just a teenager numerically, Ahed is an old-souled moujahida spiritually and it’s reflected in her unmovable willingness to sacrifice everything to deliver Falasteen from the clutches of the Zio-Tumor.

Ahed’s imprisonment at once exposed the true, incredibly hideous face of the usurping Jewish entity–which cannot continue to illegitimately exist if it does not target, arrest, torture and abuse Palestine’s children–and the true, shatterproof steadfastness of the Palestinian heart, which even when subjected to gruesomeness devils themselves have yet to learn, it beats on to the drum of liberation. Some have compared the freckled warrior-girl of the Tamimi family to Joan of Arc. A much more apt–and much more Arab–comparison would be to that of Lady Zaynab (A.S.) Confronted with the most ruthless and tyrannical oppression at the hands of Yazid (L.A.), the daughter of Sayyeda Fatima al-Zahra (A.S.) fought back only with her words to preserve the legacy of Mouqawamah that is Muhammadi-Husseini Islam. And preserve, she did. With a little bit of improvisation and a few more rocks, Ahed Tamimi is doing the same to uphold the Palestinian cause and lead it to a future where Jewish supremacy is dead and the Right of Return is implemented. A young, fiery, Palestinian Zaynab (A.S.) indeed.

The restraint that Ahed displayed in righteously and beautifully slapping a Zionist occupation terrorist across the face as he stood illegally on her family’s property was one for the record books. It goes beyond the documented and much-discussed fact that her 15-year-old cousin Muhammad Fadel Tamimi was shot in the head and gravely wounded just hours earlier. It even goes beyond her village Nabi Saleh being brutalized in a campaign of collective punishment by ‘Israel’ for decades now. What SHOULD be a talking point of EVERYONE is that there is an outright exterminationist plot against her family, with 23 members being assassinated by the murderous Zionist savages since 1976–the most recent being 21-year old Ezzedine Tamimi on June 6th of this year. Dozens more are locked inside Zionist jails. Her family’s home has been tapped for demolition since 2010 and has been raided over 150 times. Mossad-connected ‘Israeli’ journalist Ben Caspit said IOF should “extract a price” from Ahed Tamimi “in the dark” and according to her lawyer, she’s dealt with sexual harassment while unjustly confined. But a slap is what the artificial Jewish “state” is running its accursed yap about?! A damn slap?!?!?! None on Earth can HOPE to come close to the dementedness of the ‘Israelis’. None.

With Ahed freed thankfully, our attention remains on 350 Palestinian children who are still in the Zionist occupation army’s custody along with some 6,500 adult Palestinian political prisoners. They all must be busted out from their shackles. Palestine itself too–from the River to the Sea with not one ‘Israeli’ left in between–must cease to know the agony of manacles. May Almighty God protect Ahed “Palestinian Zaynab” Tamimi and her entire family. She smiled when she was sent to prison, reveling in the chance to join her brethren and infuriating her oppressors. She smiled through tears when she got out, infuriating her oppressors twice over. And we pray that we will be graced with that same organic, gorgeous, innocent and unbroken smile of hers until the day her wish comes true and Palestine is free of the cancer that has plagued its body of Holy Land for far, far too long. #WelcomeHomeYaAhed #PalestinianZaynab #Ta7yaFalasteen #EndZionism (Artwork of Ahed Tamimi by my ever-brilliant, ever-innovative and ever-inspiring bruv from another muv Mohammad Hamza of Intifada Street)