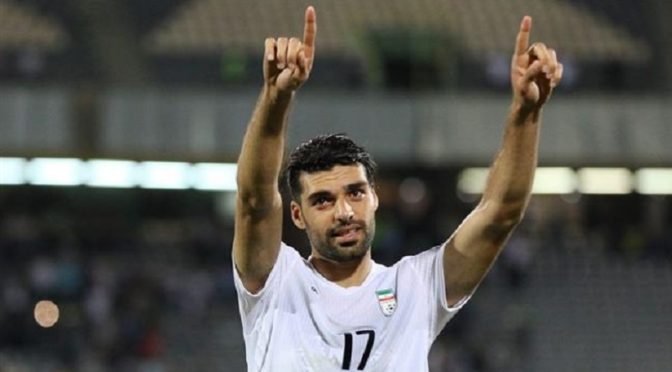 Big ups to Iranian striker Mehdi Taremi. One of the most popular football players in Iran, the brother was subjected to a frothing-at-the-mouth campaign by the usurping Jewish entity and its hasbara-spewing minions across the web last month because he retweeted and approved of Ayatollah Sayyed Ali Khamenei’s Hebrew/English/Farsi notation that ‘Israel’ will not exist in 25 years. “Hate speech”, the Yahoudlings bellowed. “Ban him”, the vile Zionists kvetched. The artificial ‘Israeli’ regime was so uncontrollably upset that its Foreign (a perfectly apt term because every single ‘Israeli’ is a foreigner in Palestine) Ministry spokesperson Emmanuel Nachson made a statement, “For the sake of his team, it’s best if Taremi focused on soccer and not on echoing ugly and illegitimate calls against the State of Israel.” The irony couldn’t be more delicious. Calling for the end of Zion is in fact entirely legitimate because Zion is a fundamentally illegitimate enterprise. And such calls aren’t ugly but splendiferously beautiful because seriously, what’s more beautiful than an oppressed people having their rights restored and those who oppressed them meeting a deserved end of disgrace?

Due to the Zio-Tumor being the illegal project that it is, anything and everything it does on the global stage is by definition a propaganda activity designed to grant it what it can never possibly have: Licitness. Validity. Authenticity. But by the very non-virtue of nearly a century and a half of Jewish colonization and the expulsion of 750,000+ Palestinians in the Nakba, these are things that ‘Israel’ cannot and will not ever be in possession of–no matter how tightly it clings to the Arab land it stole. Not a “light” unto the nations but a BLIGHT unto the nations and it will remain this way until it ceases to exist like its Hasmonean predecessor. So it is not Mehdi Taremi but the ENTIRE ‘Israeli’ team which should be banned from international competition because it is an extension of ‘Israel’ itself, which is, at its very rotted, Halakhic-Talmudic core, a construct of hatred.

Notice that it is perfectly acceptable within sports discourse to maliciously target a Muslim player for no other reason than they have Anti-Zionist views but it is unacceptable to justifiably EXPOSE Zionist players and owners whose hands are drenched in Arab and Muslim blood. Remember Nicolas Anelka’s ordeal? The Martiniquan-French Muslim superstar was banned for 5 games back in ’14 and fined 80,000 euros just for throwing up Anti-Parasitic comedic genius Dieudonne’s famous Quenelle gesture. How about the world-renowned Mo Salah? After refusing to shake hands with Maccabi “Tel Aviv”, an ‘Israeli’ terrorist team, he was browbeaten by his former team’s ownership (more on that shortly) and UK Zionist media until he apologized for his actions and distanced himself from Anti-Zionism generally–a show of pure cowardice on his part, no doubt. Then there is “Super” Mario Balotelli, who was raised by a Jewish Italian foster mother from the tender age of three. He pleaded guilty to a charge from the Football Association for posting “Anti-Semitic” content, that is, a racism-mocking meme on Instagram that included the words “grab coins like a Jew”. As if Jews, across the West, as well as in Latin America and South Africa, don’t have wealth and “success”. Ridiculous. And how about the Chilean football club Palestino? The ones on their jerseys were designed as the map of historic Palestine and after complaints from the country’s fanatical Jewish lobby, Chile’s football league fined them and forced them to change their uniform design. We could go on but this should get the point across.

Back to Mo Salah and the owner of his former club, Chelsea, who exacted a pound of proverbial flesh from his person for his previous Anti-Zionist stance: Roman Abramovich. A devil among devils, this Russian-Jewish tycoon has made his money in oil, gas, aluminum and numerous private investment swindles as well as the sporting world. His funding of Jewish-Zionist organizations from the UK to Russia to the Zionist entity itself, where he now participates directly in the occupation as a land thief, is well-established. And yet it cannot be acknowledged in a critical light. Within the ‘Israeli’ tumor’s criminal enclaves in occupied Al-Quds, there is a football club known as Beitar Jerusalem that has literal legions of anti-Arab, anti-Muslim, anti-Black hooligans who attend its games, chant “death to the Arabs!” and inflict wanton violence on Palestinians. This disgrace to the Beautiful Game has recently renamed itself after Donald Trump. This is swept under the rug.

Palestine could have one of the finest national teams in the world but ‘Israel’ has deliberately crippled some of its most gifted talent. Muhammad Nimr, Mahmoud Sarsak, Omar Abou Rois – Imprisoned. Muhammad Dahlan, Ibrahim Khattab, Muhammad Abou al-Bayd, Adam Halabiya, Jawhar Nasser, Muhammad Obeid – Maimed and disabled. Saji Darwish and Ahed Zaqout – Murdered. This is covered up. When Algerian, Moroccan, Irish, Scottish and Italian fans who show solidarity with Palestine — because the Palestinian cause is the Heartbeat of Humanity after all — they are lambasted, fined and sometimes even banned from coming to games or searched beforehand to ensure they don’t aren’t bringing “propaganda pieces”, i.e. the Palestinian flag, into the stadium. Referring back to the “Prince”, Nicolas Anelka, for just a moment… The head of the British Football Association at the time of his “sentencing” was David Alan Bernstein who was said to have personally pushed — and hard — for the cruel punishment. Bernstein is a gentrifying Zionist Jew with deep ties to the UK Yahoudling Lobby. We’re supposed to pretend this had zero bearing whatsoever on his decisions as FA chief.

And this is the issue, ultimately. Global Zionism dictates how we can and can’t discuss its power and influence as if some rabbinical edict has been passed and the abysmal, supremacist Noahide Laws have been enacted worldwide so all Goyim better succumb or else. Well. We ain’t sons and daughters of the Rav or the Besht, nor are we slaves of the false Jewish “Moshiach”, and the planet, as much as Jewish extremists like Chabad Lubavitch –who Abramovich and his Zionist deputy Eugene Tenenbaum fund — would like us to think otherwise, isn’t a yeshiva. Gentiledom constitutes something like 99% of the world’s population and even if you exclude all of the usurping Zionist entity’s Shabbos Goy allies from the mix, it still wouldn’t be enough to stem the Anti-Parasitic fervor that is growing worldwide. People love Palestine and they abhor ‘Israel’, it’s really that simple. And the murderers, terrorists, land thieves, black market organ peddlers, assassins and insatiable neo-capitalist bankers are not in any moral position to tell people of conscience what words can and cannot come out of their mouths. We reject the Hate Speech Regime of the Kosher Thought Police as unequivocally as we reject the existence of the Jewish supremacist “state”.

All of this was necessary to unravel before returning back to Mehdi Taremi. As a player of the Iranian national team, he is representing the Iranian nation. And the Iranian nation is not a regular, nonaligned state of the Global South but a revolutionary powerhouse that is the guide to Moustazafeen the world over. ‘Israel’, while spreading Zioganda about a secret ‘Israeli’-Persian arms connection, backed tyrant Saddam Hussein in the Imposed War between 1980-1988. This was confirmed by ex-katsa Victor Ostrovsky’s memoir “The Other Side Of Deception” which Mossad frantically tried to get banned. ‘Israel’ tried to assassinate Imam Khomeini (R.A.) on multiple occasions. ‘Israel’ and its fifth column in America, AIPAC, were (and remain) the architects of the sanctions ravaging Iran’s economy. ‘Israel’ subversively slaughtered half a dozen of Iran’s nuclear scientists and numerous IRGC commanders. ‘Israel’ spies on Iran and is pouring the poisons of Jewish Cultural Imperialism into Iranian households with satellite-fed propaganda. ‘Israel’ is arming, financing and training the cultish MEK and separatist terrorists in Khuzestan, Balochistan and Kurdistan. ‘Israel’ keeps lying about Iran’s peaceful nuclear program and won’t stop pressuring Western states to wage a full-blown war on the Iranian people.

But Mehdi Taremi isn’t supposed to support his nation’s head of state when the latter calls for the Dajjalic entity wreaking so much havoc on his people to disappear due to all the aforementioned aggressions? Doesn’t this sound insane in ways even the most gifted, non-Judaic shrinks would have a problem diagnosing? World Jewry and its vassals throughout the various international football associations can implement as many Talmudic bylaws as they want, it won’t eradicate the burning desire in the hearts of billions of football fans to see ‘Israel’ toppled. The young Iranian star may have deleted the tweet to stave off the Zionist pressure but this doesn’t delete the truth of what he shared from Imam Khomeini’s (R.A.) righteous successor. Verily, the end of the Zio-Tumor is just around the corner. And it’s going to be the Islamic Revolution, led by Ayatollah Sayyed Ali Khamenei and the IRGC, spearheading the war of liberation that frees Palestine first and gets the dominoes rolling against the Rothschild Empire. Big ups again to Mehdi Taremi. Our hearts and prayers and salutes are with him… As well as the Mouqawamist Magnetic North that he plays so brilliantly for. Long live the Islamic Republic of Iran and all of its beautiful and resilient people!