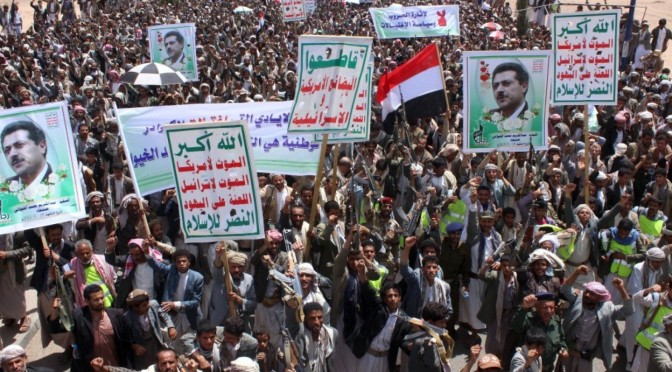 At least 45 civilians have been killed and over a hundred injured following Saudi airstrikes on the northwestern Yemeni province of Sa’ada.

According to reports on Saturday, the Saudi warplanes pounded targets in Sa’ada, killing and injuring scores of civilians.

Earlier in the day, Saudi airborne assaults also struck several parts of the capital city of Sana’a, including Faj Attan area and an educational center in the Tayal Khawlan district.

Reports also added that the clashes between forces loyal to Yemen’s fugitive former president and popular committees forces, backed by Ansarullah fighters of the Houthi movement, as well as Saudi airstrikes left at least 27 people dead in the southwestern town of Ta’izz .

According to a medical source, the dead included 19 members of the popular committees, four soldiers of a mechanized army unit loyal to former president, Abd Rabbuh Mansur Hadi, and four other pro-Hadi fighters.

On Friday, Iran submitted a peace plan for Yemen to the United Nations in an attempt to end the bloodshed in the Arab country.

In a letter to UN Secretary General Ban Ki-moon on Friday, Iran’s Foreign Minister Mohammad Javad Zarif called on the international community to take necessary measures to stop the Saudi airstrikes against the Yemeni people, which have claimed the lives of hundreds of civilians so far.

“It is imperative for the international community to get more effectively involved in ending the senseless aerial attacks and establishing a ceasefire,” said the Iranian official, adding that Tehran is ready to cooperate with the UN “to facilitate and encourage an immediate end to these senseless bombardments and initiation of a genuine dialogue to find a political solution to this tragic crisis.”

Zarif discussed the formation of an inclusive national unity government as the only way to halt Yemen’s deadly clashes.

“The only way to restore peace and stability is to allow all Yemeni parties to establish, without any foreign interference, their own inclusive national unity government,” Zarif pointed out.

Saudi Arabia’s air campaign against the Ansarullah fighters of the Houthi movement started on March 26, without a United Nations mandate, in a bid to restore power to the country’s fugitive former president, Abd Rabbuh Mansur Hadi, a staunch ally of Riyadh.