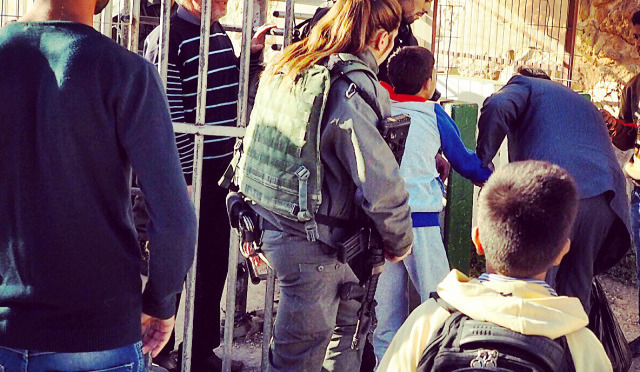 The Israeli soldier grabbed the young boy by wrapping his hand in the collar of his shirt, twisting his clothing tightly around the neck, despite the fact that the young Palestinian showed  no signs of resisting.

After several minutes of Palestinian adults pleading with the soldier to release his grip, the soldier finally responded and escorted him to the police station next to the Ibrahimi Mosque – without his parents being notified.

Once at the police station, the young boy was detained for over an hour and a half, after which the soldier informed one of the school teachers that he would be handed over to the Palestinian Authority at Check Point 56 at Bab iZeweyya, in the H1 section of Al-Khalil. Once the child was in the military jeep by himself, the Israeli soldiers transported him to the other side of Al-Khalil to the illegal settlement of Kiryat Arba.

As of the time of this writing, he has yet to be released.