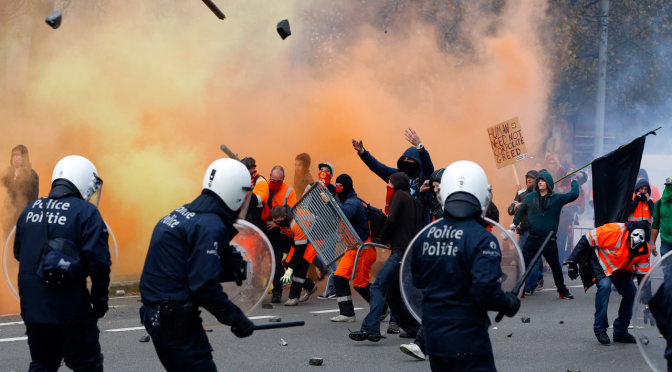 Around 100,000 Belgians had earlier marched through central Brussels in protest against the new government’s savings measures. It was the first in a series of demonstrations and strikes planned over coming weeks.

Prime Minister Charles Michel invited leaders of Belgium’s three main union branches to talks with the government, although did not offer any obvious concessions. Discussions began on Thursday afternoon.

Belgium’s centre-right government, installed only a month ago, has pledged to raise the retirement age and limit scope for early retirement, cancel an inflation-linked wage hike due next year and cut the health and social security budgets.

Unions estimated that around 120,000 workers, from dockers to metalworkers, as well as students, had gathered to protest in the Belgian capital. Police put the number at 100,000.

For Thursday’s march, rail operator SNCB said it had sold 80,000 tickets in advanced group bookings for travel to Brussels and had laid on 15 additional trains. Unions had also booked 500 buses to get protesters from all over the country to the capital.

Otherwise, public transport in Brussels was severely restricted. Buses and tram services in other Belgian cities were also reduced.

The Socialists, excluded from government for the first time in 26 years, have complained that while workers were hit, the rich were unaffected.

“I share the concern of the people and the measures of the government are unjust,” said former prime minister Elio Di Rupo.

Central bank governor Luc Coene said Belgium needed reforms to cuts a public sector debt of around 100 percent of annual output and to raise competitiveness. He said a failure to act now would simply increase the problem for the next generation.

“The people who go on strike against these savings measures, are actually saying to their children: get lost. I find that really bad,” Coene said in an interview in Trends magazine.