David Cohen, the Under Secretary of Treasury for Terrorism and Financial Intelligence, and his band of neocon Zionists who randomly freeze accounts and bring sanctions against foreign officials and businessmen who do not comport with neocon diktats have now targeted Yemeni leaders. Cohen has systematically brought sanctions against any leaders who pose a threat to Zionist designs, whether they are leaders of Yemen who reject a Zionist plan conceived by former U.S. ambassador to Yemen Gerald Feierstein to carve up Yemen into six provinces dominated by a pro-U.S. government, Hungarian anti-European Union nationalist politicians, or Russian-speaking leaders of Crimea and eastern Ukraine.

In his zealous pursuit of Iranian sanctions, Cohen and his team have targeted third countries that have economic ties with Iran, including Belarus, Switzerland, Venezuela, and China.

Ever since the Under Secretary of Treasury for Terrorism and Financial Intelligence position was created in 2004, it has been in the hands of neocons. The first under secretary was Stuart Levey, whose favorite sanctions targets were Iran and Syria. Levey has since become the Chief Legal Officer for the scandal-plagued HSBC bank.

The director of the Treasury’s Office of Foreign Assets Control (OFAC), which enforces Cohen’s orders, is Adam J. Szubin, yet another neocon Zionist with the power to engage in financial subterfuge in countries around the world.

The sanctions brought by Cohen’s operation against three Yemeni leaders were authorized by President Obama’s Executive Order of May 16, 2012, titled “Blocking Property of Persons, Threatening the Peace, Security, or Stability of Yemen.” The first three targets were not members of Al Qaeda in the Arabian Peninsula, whose size and influence in Yemen have been vastly overblown by U.S. intelligence agencies, but against former Yemeni President Ali Abdullah Saleh and two Houthi rebel commanders, Abdullah Yahya al-Hakim and Abd al-Khaliq al-Huthi. The Houthis are Zaidi Shi’a Muslims with close links to Iran. Cohen’s actions have extended from Syria to Yemen what has been a virtual U.S. war against Shia Islam. Saleh and the Houthi rebel commanders, who walked out of a shaky unity government, were charged by Cohen’s office “for engaging in acts that directly or indirectly threaten the peace, security, or stability of Yemen.” Saleh was said by Cohen of “reportedly [becoming] one of the primary supporters of violence perpetrated by individuals affiliated with the Huthi group.” Hakim was charged by the Treasury unit of “plotting a coup attempt against Yemen President Mansur Hadi as the Huthi forces sought to take over Sanaa, Yemen’s capital.”

The Houthi rebellion was triggered by incessant attacks on Zaidi Shi’a civilians in the north of Yemen carried out by the Yemeni central government’s military, which was assisted by Saudi Arabia, the United States, and, extremely covertly, by Israel.

Contravening the orders of Washington, Saleh withdrew the ministers of his General People’s Congress party from the unity cabinet led by Khaled Bahah, a former Yemeni ambassador to the United Nations and neocon-led Canada and an ardent fan of such social networking programs as Facebook and LinkedIn. Bahah, who hails from the secessionist south of Yemen but favors a unified Yemen, rose up in opposition to the Saleh government in March 2011. Saleh was ousted in a George Soros/Gene Sharp-style “themed revolution.”

Yemeni President Abdrabuh Mansor Hadi appointed Bahah prime minister after Houthi rebels descended from their northern Yemeni stronghold along the Saudi border and occupied government buildings in Sana’a, the Yemeni capital. The Saudis, under orders from the United States and with the ascent of Israel, have waged an aerial bombing campaign against the Houthis from bases in Saudi Arabia. The United States reportedly hit Houthi positions from drones launched from Djibouti, across the Red Sea.

Ali Salim al-Beidh and other leaders of the former People’s Democratic Republic of Yemen, or South Yemen, have given quiet support to the Houthis. Abdulrahman al Jifri, the former vice president of South Yemen, recently returned from exile in Saudi Arabia to a thunderous welcome at Aden International Airport. Jifri called for the restoration of the south’s independence and he warned the Houthis not to encroach on the territory of South Yemen. The possibility that South Yemen could re-emerge as an independent state with a number of leaders of the former pro-Soviet republic in charge has definitely alarmed the United States and Israel’s agents-of-influence in the Obama administration.

Cohen’s sanctions order against Saleh and the Houthis stated “the U.S. supports Yemen in its efforts to make economic reforms and “will hold accountable” anyone who threatens the country’s stability.” There is a clear warning that Cohen and his colleagues are prepared to extend sanctions to others who oppose the Yemeni federation plan cooked up by the neocons and Zionists.

The Houthi takeover of Sana’a put a nail in the coffin of the Yemen federation plan conceived by Cohen’s co-ideologues — Feierstein and the former Deputy Assistant Secretary of State for Near Eastern Affairs Jeffrey Feltman. Now the Under-Secretary-General of the United Nations for Political Affairs, Feltman was an early opponent of any type of self-determination for southern Yemenis who wanted their independence restored or the Zaidi Shi’a Houthis of the north. According to a leaked February 23, 2010, U.S. embassy Muscat, Oman cable to the State Department, Feltman, in February 17 discussions with the Sultan of Oman and his advisers, stressed U.S. opposition to independence restoration for South Yemen.

Omani Sultan Qabus bin Said gave Feltman a lesson on the history of South Yemen. The Sultan stated that “he had been personally involved in efforts to avert the 1994 civil war. The south entered the union because it calculated it would dominate the government, a calculation that proved wrong. The situation has been exacerbated because the north has neglected the south, especially after the north’s victory in the war. Consequently, in the south today there are two schools developing. One is seeking greater autonomy within a united Yemen, and the other seeks independence.”

However, things have changed since 2010 in the South. Officials of the former Marxist-led South Yemeni government have made common cause with the sultans and sheiks they toppled upon independence from Britain in 1967. Moreover, there are historical and traditional links between Oman and Saudi Arabia and the former sultanates of South Arabia.

There have been contacts between Saudi intelligence and Ageel bin Muhammad al-Badr Hamidaddin, the pretender to the Mutawakkilite throne of the former Kingdom of Yemen. Al-Badr, who is exiled in London, would command the instant loyalty of many Yemenis if he were to become the leader of the restored kingdom ruling over north Yemen. Al-Badr would also be well-disposed to the status quo ante of the restored independence of South Yemen in the form of a federation of Aden and the restored sultanates of the Hadhramaut region or as four separate countries: South Yemen or South Arabia, the Qua’iti State of Hadhramaut, the Mahra Sultanate of Qishn and Socotra, and the Kathiri State of Seiyun. In addition to the exiled pretender king playing more of a role in Yemeni affairs, Mohammad Hameed Al-Din, the grandson of Yahya Hameed Al-Din, the imam who ruled north Yemen from 1911 until 1948, recently returned to Yemen from exile in Saudi Arabia. 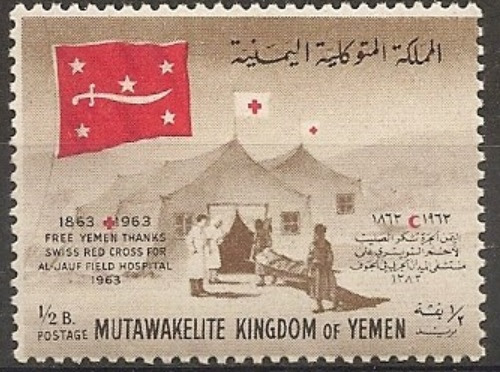 (Stamp issued by the Kingdom of Yemen in 1963 depicting the once and possible future flag of Yemen)
The leaders of the three largest former sultanates of eastern South Arabia are now flexing their political muscles along with the pro-South independence movement Al-Hirak. The new “unity” government in Sana’a even includes members of Al-Hirak, which has taken control of the important Oil Ministry. Throughout Aden and other South Arabian cities, the flags of the former South Yemen and even the former sultanates are seen more than the discredited flag of Yemen. Al-Hirak has formed the Supreme Council of the Revolutionary and Peaceful Southern Movement. The council has demanded that the former president of South Yemen, Al-Beidh, be restored as the president of the South. The name “Yemen” is so unpopular in the south that those who demand independence restoration merely refer to the aspiring nation as the “South.” Others use its former pre-independence name of “South Arabia.”

Sultan Ghalib II bin Awadh al-Qu’aiti of the Qu’aiti State in Hadhramaut; Abdullah bin Isa, the would-be restored Sultan of the Mahra Sutanate of Qishn and Socotra, the latter a strategic island in the Gulf of Aden long sought by the U.S. Navy as a base; and Husayn ibn Ali, the aspirant restored sultan of the Kathiri State of Seiyun in Hadhramaut have all initiated plans to see the independence or autonomy of their sultanates restored in either an independent Hadhramaut federation or as part of a loose federal South Yemen/South Arabia with its capital in Aden.

It is clear that Cohen and his Zionist colleagues’ warning that further sanctions will be applied to “anyone who threatens the country’s stability” is directed at the former monarchs — imams, sultans, and sheiks of Yemen — as well as the leaders of the Southern Movement (Al-Hirak) who reject the Feierstein plan. The Obama administration, in general, ignores the legitimate rights of the former South Yemen, the Hadhramaut, the Houthis, and the former Mutawakkilite kingdom. Some of the royalists and former Marxist South Yemeni republic leaders have sizable assets in London, Jeddah, Beirut, and other cities and Cohen’s threat of seizing bank accounts is clearly not limited to Saleh and the two Houthi commanders.

Cohen is merely stepping into the shoes of the British Foreign Office, which sold South Arabia down the drain in 1967 when Britain, hasty to withdraw its forces from “East of Suez,” left local administrations in South Arabia to fend for themselves amid a guerrilla war waged by nationalist independence forces. The communiqués between the Qu’aiti Sultan and London speak volumes of the treachery of Britain. Today, for South Arabia, that treachery has been assumed by the United States with the guiding hand of neocons and Zionists who take their orders from Jerusalem and George Soros. 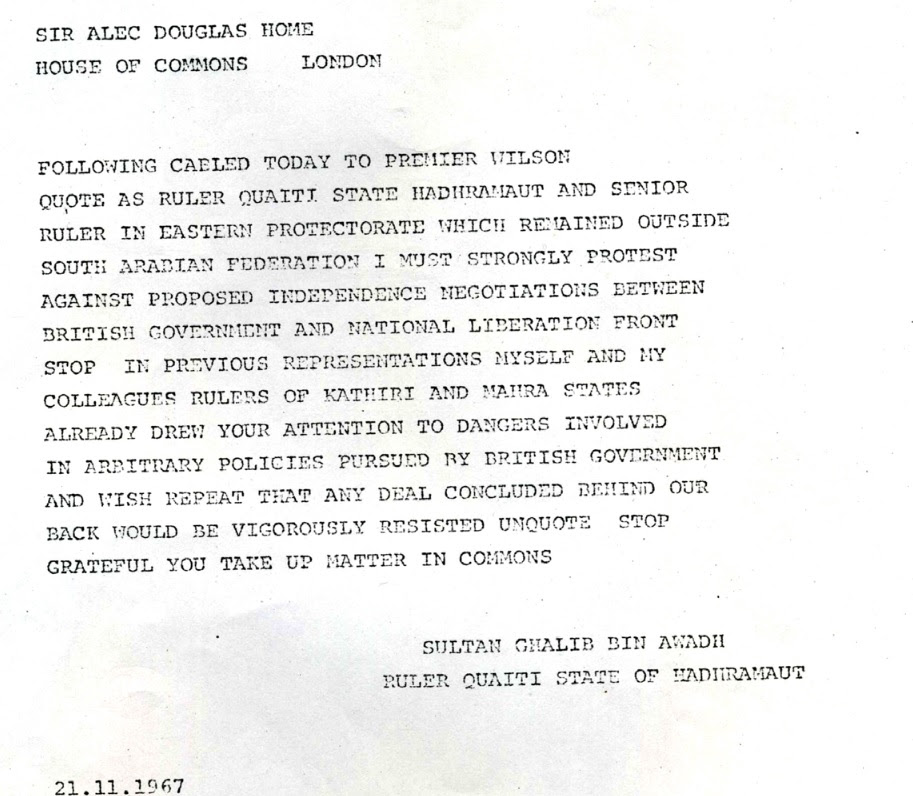 (Sultan Ghalib II once faced arbitary policies from London. He and his colleagues now face them from Washington) 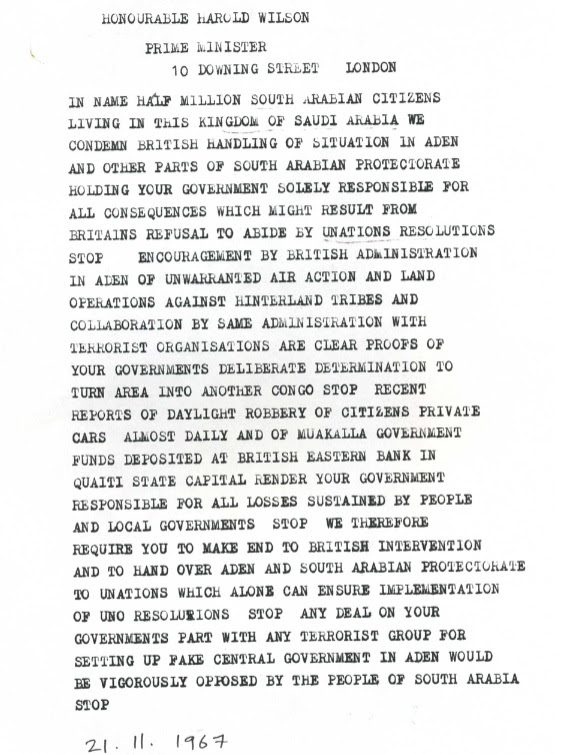 (Britain’s 1967 treachery in South Arabia now being repeated by grotesque interference in Yemeni affairs by Zionists in the U.S. Treasury Department) 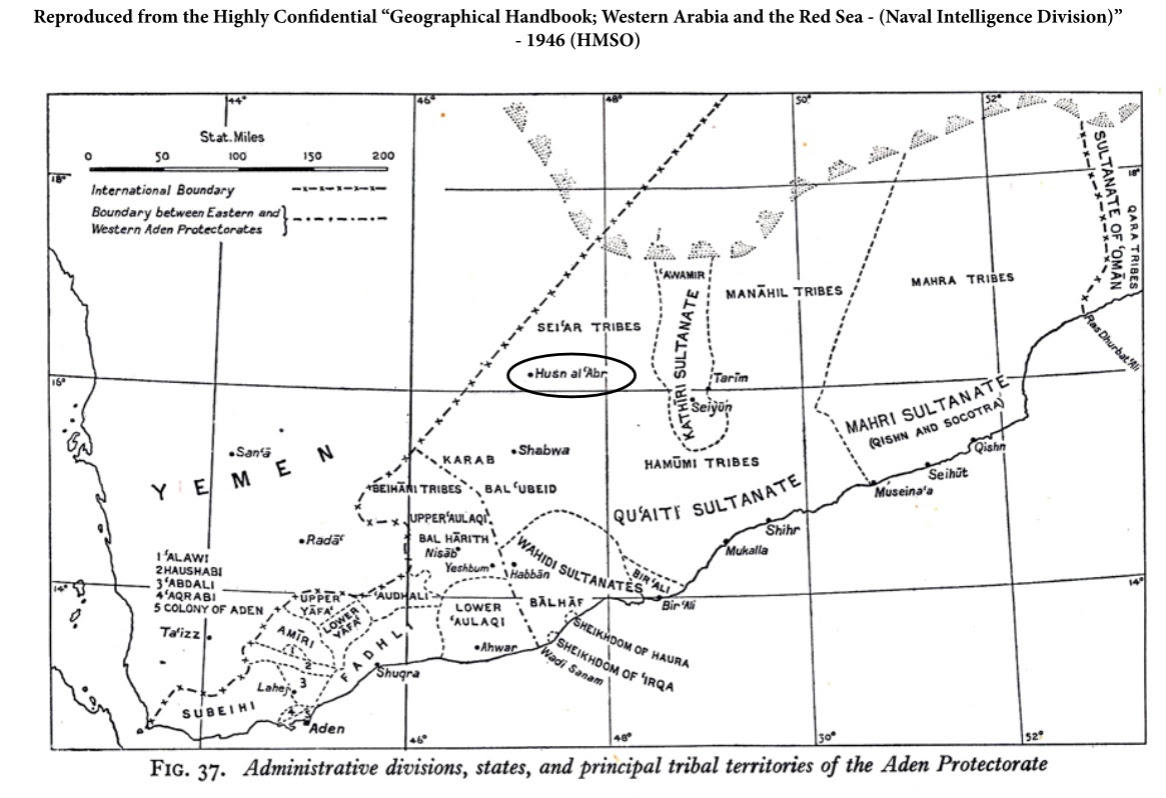 (The Central Intelligence Agency has falsely claimed that the resurgence of nationalism by sultanate-based tribes in South Yemen is the work of Al Qaeda in the Arabian Peninsula (AQAP). The charge is a bogus excuse for the CIA to attack the tribes with drones to extinguish their drive for self-determination. For the CIA, the attacks on the tribes are no different than the U.S. cavalry’s genocide directed against the Native American tribes)

(The CIA and Zionists like Feierstein, Cohen, and Szubin are determined to lie about tribal  restoration of states like Upper Yafa in South Arabia by calling it all “Al Qaeda.” Zionists have always specialized in the “Big Lie.”)