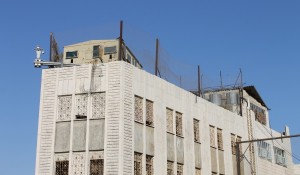 A walk through occupied Al Khalil (Hebron) offers a shocking and heartbreaking insight into the struggle of the oppressed souls of one of Palestine’s most important cities. Day by day, Al Khalil is becoming a ghost town as the indigenous Palestinians are forced out through a wickedly evil campaign of terrorism, intimidation, and oppression.

Israel’s occupation is multi-faceted, one which attacks the Palestinians’ freedom, culture, economy, and way of life, as well as their very survival in ways which will shock and perturb any person who harbours even a modicum of humanity in their soul.

Al Khalil – over 5,000 years old – is the largest Palestinian city in the West Bank with over 220,000 Palestinians living in the city, and 620,000 living in the district. It is also the most important commercial centre in Palestine. Once replete with shops and market stalls, shoppers, residents, and visitors used to swarm the streets making Khalil a vibrant and lively city. Today however, this beautiful and historic place is being transformed into a ghost town, as the indigenous Palestinians are being gradually expelled in especially cruel and wicked ways. This is merely a microcosm of Israel’s wider campaign to ethnically cleanse all of Historic Palestine – the land it occupies from the Jordan River to the Mediterranean sea – of all gentiles (non-Jews). In Al Khalil, this is to make space for extremely violent and hateful Jewish settlers who terrorise the Palestinians under the full protection of the occupying Israeli army.

Al Khalil’s tragic story began in earnest after Israel’s 1967 invasion and occupation of the West Bank. In the following year a group of extremist Jews rented rooms in a hotel in Khalil for Passover, and then refused to leave. An agreement was made with the Israeli army, and the illegal settlers moved to a military base. Subsequently they moved to an area north of Khalil, which today forms the illegal settlement of Kiryat Arba. Kiryat Arba is the largest of five illegal settlements in central Khalil. 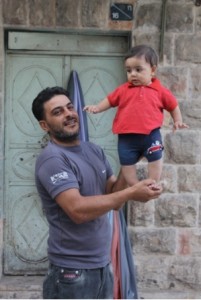 As a result of Israel’s criminal conquest of Khalil, the city is now separated into two zones: H1 and H2. H1 constitutes approximately 80% of the territory of the city and is located on the western part, while H2 is roughly 20% and sits on the eastern section. As with the apartheid wall, the boundary between H1 and H2 snakes in and out in order to award the foreign settlers with the most coveted land and property.

Movement is severely restricted for Palestinians. Only the illegal Jewish settlers are allowed to drive their cars in certain designated areas of the city.

Palestinian schools are located within restricted areas, meaning that children are forced to take classes in the street when checkpoints are arbitrarily closed by the occupying army.

On certain roads, Palestinians are not even allowed to walk on the street, and this includes areas where Palestinian homes are located. This has forced Palestinians to create new entrances and exits to their homes. 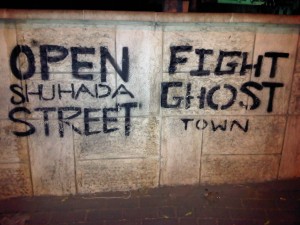 The Ibrahimi Mosque is even located within H2, making it impossible for Palestinians outside this area to practise their religion, unless they go elsewhere. This writer accompanied a group of young Palestinian men as they passed through a checkpoint into H2 in order to visit the Ibrahimi Mosque. As we were being processed through the checkpoint we had to hand over our bags and the contents of our pockets for Israeli ‘security checks’. One of the occupying soldiers stole the money from the wallet of one of the Palestinian men. In monetary terms the cash did not amount to much, but this was an example of the psychological bullying techniques employed by the soldiers in order to break the spirit of the occupied Palestinians, and let them know who is really in control. 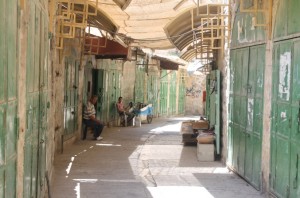 Shuhada street, within the H2 area, was once the most important street of the commercial area of the city, and it has been closed off to Palestinians since 2000. Now, only a select few Palestinians (four families who live on the street) are allowed through. Iron fences and concrete roadblocks pervade the city, separating the H1 and H2 sectors.

Of 1,829 shops in the Old City (in both H1 and H2), 77% have been closed by the Israeli occupiers. Each and every shop that is closed leaves a Palestinian family unable to provide for their children. These are not merely statistics. As of 2008, the unemployment rate in Khalil was at a whopping 50% – Khalil is being economically strangled by the occupation. While the Israeli occupiers close shops with military orders and other arbitrary techniques, they also employ an especially cynical method of dividing Palestinian society. 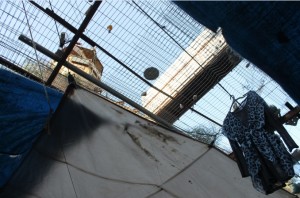 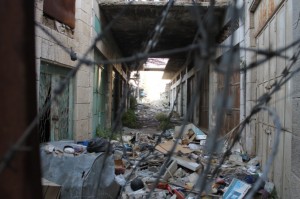 What was once the gold souk (market) in the Old City, is now an abandoned and filthy street in complete disrepair. The occupiers have closed it off using metal fencing and razor wire. The settlers who live on the floors above have thrown trash and soiled nappies onto the street below, demonstrating their complete contempt for the land they claim to be divinely promised to them. 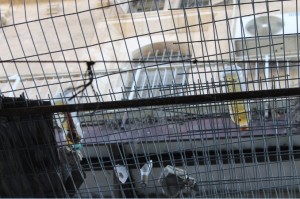 In this same area of the city, one can see bottles of urine and broken glass bottles that have been thrown down onto the street below by the settlers. This type of harassment is a daily reality for Palestinians forced to live alongside these invading colonists.

On top of the economic restrictions and other restrictions aforementioned, Khalilis (Hebronites) are suffering an ongoing campaign of terrorism aimed at making them vacate their land in favour of extremist Jewish settlers. Within H2 there are 400 illegal Jewish settlers who enjoy the protection of 1,500 occupying IDF soldiers, who give the settlers carte blanche to terrorise, harass, and attack the Palestinians to their black hearts’ content.

This writer spoke to a number of Palestinian Khalilis and heard their heartbreaking and tragic stories. They will be documented herein alongside photographs – click on the photos to see an enlarged version.

One Palestinian man named Adham told the story of his brother, who now lives with his family in zone H1 in defiance of the expanding Jewish settlements, right on the border with zone H2 and just around the corner from the ethnically cleansed gold souk. The majority of the building which was their family home is now occupied by settlers. Adham’s brother and his brother’s wife now reside in a tiny portion of what was their family’s residence. This makes their family’s story both a sad example, and a tragic microcosm of Al Nakba, wherein most of Historic Palestine was stolen by invading Jewish terrorists, leaving the Palestinians forced to accept tiny enclaves now referred to internationally as The Occupied Palestinian Territories.

Israel offered Adham’s brother a cash bribe equivalent to hundreds of thousands of US dollars to vacate what was left of his family home – territory highly coveted by the Zionist state. This dignified man refused the bribe and chose to remain on his land, an act which would later cost him and his family dearly.

Settlers murdered his wife right outside his family home, and threw bleach in his young son’s eyes, blinding him. 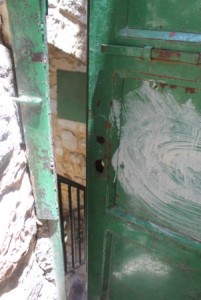 They randomly fire automatic weapons through the adjoining walls in order to terrorise Adham’s family into leaving. This family’s only crime? They are not Jewish.

Another story is equally heartbreaking and tragic. A young Palestinian man named Saeed took this writer into the home of a Palestinian family that has suffered a similar tragedy. The family home straddles the border of the illegal Avraham Avinu settlement, and as a result they are forced to live alongside supremacist Jewish terrorists who cannot abide living alongside non-Jews.

The external doors of the family property have had their locks punched out by the IDF, meaning that they can have no semblance of security or peace within their home. On a routine basis, IDF soldiers enter the property unannounced and they occupy one of the rooms of the property in order to use it as a spying base. 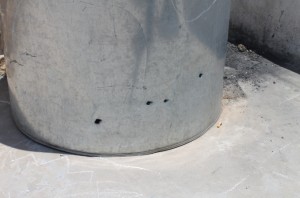 Water is an invaluable resource in the arid lands of Palestine. This family is being denied a reliable supply of water; settlers have climbed across the roof from their neighbouring settlement of Avraham Avinu, and punctured the family’s water tank – depriving them of their very life source.

Standing on the roof of the family home, one is surrounded by razor wire, IDF army look-out posts (which dominate the skyline of the Old City), and the adjoining illegal Jewish settlement. There is no trace of normality for these occupied Palestinians. 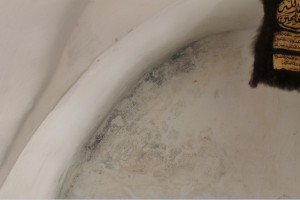 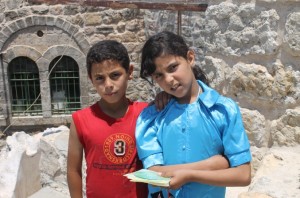 In 2007, an unspeakable tragedy befell the family. Jewish settler-terrorists entered the family home from the adjoining settlement and threw a molotov cocktail (petrol bomb) into the living room. An eight month old baby boy was sleeping in the room, and the family was not able to get him out in time; he died of smoke inhalation.

These are merely two stories that were shared with this writer, of over 200,000 Palestinians who live in central Khalil, and who are forced to live alongside aggressive colonists.

In spite of the extremist Jewish terrorists globally referred to as ‘settlers’, it must be said that the Zionist project is not an exclusively religious one. Arguing such a stance would be incorrect, and would represent an ignorant and lazy viewpoint. The religious zealotry and hatred of the settlers is merely one facet of the Israeli occupation, and it is part and parcel of the Zionist project – essential to Israel’s cancerous growth. The settlers’ violent and terroristic behaviours are the very lifeblood of Israel. Aside from the crimes committed in places such as Khalil, the terrorist state of Israel exercises equal and far greater brutality in all spheres of its existence both at ‘home’ and abroad. We need only look to Operation Cast Lead, 9/11, or the countless other crimes against humanity that punctuate Israel’s short history.

It is not valid to argue that the settlers are somehow a ‘rogue’ element of the Zionist project. The settlers are fully protected and enabled by the occupying soldiers, making them a valued tool and asset of the colonist state of Israel. The following testimony – obtained by B’Tselem – is from an Israeli soldier occupying Khalil:

During my time in Hebron, we saw many attacks by settlers and couldn’t do anything. As a soldier, they tell you, ‘You are here to protect the settlers. You are combatants, not police officers.’ There wasn’t anything we could do with the children of settlers anyway. For those under age twelve, the police can’t touch them either.

The settlers are the very human embodiment of what Israel represents: terrorism, racial supremacism, conquest and theft.

If a land were promised to you by god, would you vandalise it with razor wire and concrete walls? If you were given a divine gift of a beautiful country such as Palestine, would you decorate it with bottles of excrement, and throw broken glass bottles and soiled nappies at that country’s people? Would you mercilessly terrorise and murder those people, including children and babies?

Of course these are rhetorical questions. The notion that Palestine was somehow promised to these hateful racists is a laughable delusion. The notion that ‘Israel’ wants peace is equally imaginary. These people and ‘Israel’ – the state that patronises them – do not respect or love the land; these are invaders and conquerers whose modus operandi is terror and violence. There will never be peace with ‘Israel’, and there will never be justice in Palestine unless the world comes to terms with this reality.