These groups don’t hide behind assumed identities; these ‘Libyans’ and ‘Syrians’ shout their real identities from the rooftops. A cursory glance at the profiles of these people however, always reveals the same thing: they reside in London or the United States, often never having even set foot in their ancestral homelands. In spite of this, their drama-queen testimonies and YouTube videos profess to offer a unique insight into current events.

Take Khaled M. – this mid-twenties American-born Libyan grew up in Lexington, Kentucky. According to his own potted history posted by him on Twitter, his father, Mohamed Ahmed, helped to found the National Front for the Salvation of Libya (the NFSL), a Libyan opposition group created with the goal of effecting regime change in Libya: 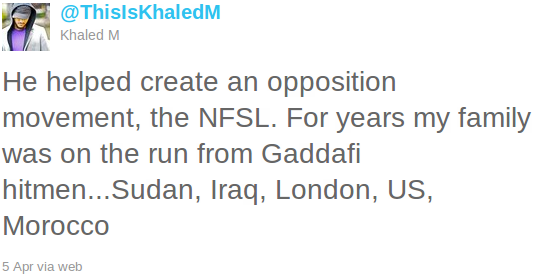 Of course the ‘founders’ of this group are merely figureheads. The NFSL (currently head-quartered in Lexington, Kentucky) was created in Sudan in 1981, by the CIA and the Israeli Mossad. Finances were funnelled in by the CIA and Saudi Arabia (who donated $7 million), as well as Egypt, Morocco, Israel and Iraq. When Khaled M. disingenuously claims that his family was ‘on the run from Gaddafi hitmen‘, moving between Sudan, Iraq, London, the US, and Morocco – in reality his family was moving between the countries that financed the NFSL, as his father received instructions and directives from his imperialist paymasters.

Further affirming the US-Israeli connection, the Paris-based African Confidential newsletter reported on January 5th, 1989, that the US and Israel had set up a series of bases in Chad and Central and West African countries in order to train Libyan rebels who were to form part of the NFSL.

In the summer of 1981 the CIA-Mossad alliance mounted covert military operations to destabilise Libya and ultimately overthrow Muammar Gaddafi. This operation mimicked current events in Libya, almost to the letter:

The details of the plan were sketchy, but it seemed to be a classic C.I.A. destabilization campaign. One element was a “disinformation” program designed to embarrass Kaddafi and his government. Another was the creation of a “counter government” to challenge his claim to national leadership. A third — potentially the most risky — was an escalating paramilitary campaign, probably by disaffected Libyan nationals, to blow up bridges, conduct small-scale guerrilla operations and demonstrate that Kaddafi was opposed by an indigenous political force.

On May 8th, 1984, the NFSL in co-ordination with its CIA-Mossad controllers mounted a murderous assault on the Tripoli compound of Bab al-Azizia in an attempt to assassinate Muammar Gaddafi. Gaddafi escaped unharmed, but over 80 people were killed in the attack. Muammar Gaddafi has been in the crosshairs of the CIA, Mossad, and MI6 for over forty years, with several assassination and destabilisation attempts being mounted.

Moving to the present day, the NFSL has played a central role in the current destabilisation and civil war that has afflicted Libya. As part of the National Conference for the Libyan Opposition (aka. the NCLO –formed in London in 2005), the NFSL helped to organise the initial February 17 ‘Day of Rage’. Riding on the wake of the Arab Spring, the Monarchy flag-flying NCLO took this opportunity to initiate yet another multi-phased attempt at regime change on behalf of its foreign masters.

The groups that fall under this umbrella are very active online, especially on social media websites. The latest poster child, Khaled M. – literally a son of the CIA-Mossad-created NFSL, is no exception to this rule.

CNN, the very outlet that has been responsible for spreading preposterous anti-Libyan propaganda, has published a short profile of Khaled. How many revolutionaries can you name that have been profiled by CNN? Rhetorical question. In his interview he boastfully admits that he “grew up wanting to assassinate Gadhafi”. In his defence, being raised by a CIA-Mossad collaborator probably does that to you.

Here Khaled is in front of the White House expounding a dramatic plea for action on Libya:

He takes the opportunity to repeat some of the crass lies and exaggerations that have defined mainstream reportage on Libya. He instructs activists to go to Feb17.info (and @Feb17Voices on Twitter), where they can see videos of “soldiers’ bodies being burned, that refused to kill their brothers and sisters in Libya“. If you hop along to LibyaFeb17.com (the actual location of the video), you will see a short clip of a number of charred corpses, but absolutely nothing other than this can be verified. Knowing that they’ve simply framed unverifiable footage within their own sick, invented narrative, of course the Feb17 webmaster appends the video with a disclaimer: “This footage shows the burnt bodies of soldiers who apparently refused to shoot at the protesters when they were ordered to.”

In his plea Khaled M. lauds the Feb17 movement as being a source of “confirmed, legitimate news from credible sources”. If you visit @Feb17Voices on Twitter you will notice that the feed is nothing more than a mouthpiece for Al Jazeera Arabic, with select reports being translated into English, prefixed with ‘AJA’. You’ll also see a litany of ‘tweets’ prefixed with ‘LPC’, meaning ‘live phone call’. None of these ‘live phone calls’ mention names or sources, they all have to be taken on faith alone. Apparently this is confirmed, legitimate, credible news.

Ibrahim Sahad – leader of the NFSL, co-founded by Khaled M’s father, can be seen here talking to Lateline from right in front of the White House. As can be expected from a paid asset of US imperialism, he calls for the international community to step in on Libya, while painting the completely false picture of Gaddafi using force against ‘unarmed protesters’, as opposed to heavily armed insurrectionists.

The Feb17 movement and the EnoughGaddafi group operate not out of Libya, but out of British and American cities; the CIA-Mossad-created NFSL is self evidently nothing more than a tool of its foreign masters. One doesn’t know whether to laugh or cry, reading the feel-good revolutionary lyrics coming from an aspiring rapper who is literally a conduit for the most counter-revolutionary force on the planet.

On a not unrelated note, remember the anti-Libyan, fake ‘disappointed Palestinians’ letter posted on the Yansoon blog? Well it’s truly of no surprise that Shirien D, the drudge that runs Yansoon, is now Khaled M’s personal assistant:

“…Have you ever heard of the National Front for the Salvation of Libya – NFSL ? Listen up as Khaled lays down the real facts straight from Benghazi…”
http://badgals-radio.com/we-gon-have-our-freedom-khaled-m-talks/