I want to start out this piece by making a couple of things clear about my beliefs. I do not suggest for a millisecond that readers should care; there’s nothing more nauseating than a person who trumpets their personal beliefs at any given opportunity. (Sadly in the case of many atheists, this is often done in the pursuit of smugly asserting one’s perceived intellectual superiority).

I will try to keep this braindump coherent; do bear with me.

I am an atheist. I was not raised in a religious household. I am a believer in the theory of evolution. I find the idea of creationism quite difficult to believe in the face of an abundance of evidence for evolution and the interrelatedness of all species (but I accept the fact that I could be wrong). I hold dear the ideals of intellectual freedom and critical thought, and I staunchly oppose all forms of dogma.

Moving swiftly on, do I think ‘Islamist extremism’ exists? Of course I do.

But now I come to the meat of the matter. And this is where Richard Dawkins and his army of blindly loyal followers will scoff, spit and curse like a seventeenth century congregation that’s just been thrown a copy of The God Delusion.

The ‘New Atheism’: a Vehicle for Dogma & Herd Mentality

Atheism has become a vehicle for the very thing it claims to oppose: dogma. Buoyed by a rising tidal wave of knee-jerk bigotry, atheism is instilling a rigid dogma in its followers. This army of self-professed ‘critical thinkers’ has now disposed of critical thought, and has instead taken up a campaign of hero worship, ultimately spreading a pernicious and baseless dogma in the form of the War on Terror. Allow me to explain.

Dawkins commands ‘decent’, moderate Muslims to come out and condemn stoning (a practice that is admittedly barbaric and indefensible on any level). 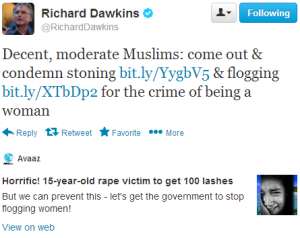 Such frequent rabble rousing against Muslim nations and cultures (while ignoring far greater human rights abuses carried out by ‘enlightened’ Western nations) constitutes a trend amongst atheists, even amongst ex-Muslims who are eagerly touted and re-tweeted by Dawkins and his over 600,000 Twitter followers.

Am I saying that we should not criticise Islam or any other religious beliefs? No, absolutely not.

But, there is a deeper significance to this that, as ‘critical thinkers’, atheists (Dawkins included) have failed to grasp in a spectacular display of irony.

Allow me to point out before I continue: ‘Muslim’ terrorists and extremists exist. They behead those they see as ‘infidels’. They mercilessly slaughter women and children in their pursuit of misguided ‘jihad’.

And they do this with the active and tacit support of every single Western nation that so loudly decries ‘Islamist terrorism’. For a recent example, please refer to the 2011 decimation of Libya and the ongoing war on Syria, both orchestrated on the ground by hordes of brainwashed and misguided ‘jihadis’ wielding NATO rifles in their left hands, and Qatari paycheques in their right.

If ones traces further back in time, one will see that the mercenary army often referred to as ‘al Qaeda’, was created by the USA as a proxy force, which was used to fight the Russians in Afghanistan throughout the 1980s – precisely as they are being used today in Libya and Syria.

Aside from ‘al Qaeda’ being a proxy army that is literally airlifted on demand to wherever NATO requires manpower, it is also used as an instrument of fear. The notion that these braindead savages are in any way a threat to Western nations, is laughable.

Well, the very kernel of the ‘Muslim terrorist’ meme is the terrorist attacks of September 11, 2001. One of Dawkins’ favourite quips is “Science flies you to the moon, religion flies you into buildings”.

The ‘official narrative’ of 9/11 however, which has formed the basis for the global ‘War on Terror’, is an out and out lie, nothing more than a political dogma.

More than a decade on, any thinking person worth his salt has begun to ask questions about the events of 9/11. As a learned scientist of global repute, it is surprising that Richard Dawkins apparently has such an elementary grasp of physics. Most secondary school students can figure out that steel cannot be melted to a liquid by jet fuel. A 110-storey steel-framed skyscraper cannot explode entirely into dust, roof to street, in a matter of seconds due to airplane impact, fire, or both. Perhaps Dawkins can get a physics lesson from the over 1,700 architects, scientists, and structural engineering professionals who are asking these questions, to be met with silence:

It may seem insignificant to talk about the manner in which the World Trade Center was destroyed. Bearing this in mind however, if you do employ the scientific method and a dose of critical thought, then you will eventually see that this fundamental problem with the 9/11 account actually precludes the possibility of any of the central tenets of the 9/11 dogma being true. Bearing this in mind, along with the bewildering number of other inconsistencies and lies surrounding the 9/11 attacks, it becomes clear that 9/11 was, in military intelligence speak, a ‘false flag’ operation.

Of course at this stage, believers of the 9/11 religion will sneer and laugh at this heretic ‘conspiracy theory’. Well if you’ve made it this far, I ask you to employ your critical thinking faculties and question your faith in the 9/11 religion that has been thrust upon us all. Apply the scientific method in order to fill the hundreds of fundamental holes in the official story of 9/11. I will not attempt to explain the 9/11 false flag on this page, but the following articles make a start.

9/11 ten years on: there are no excuses for buying the myth:
http://empirestrikesblack.com/2011/09/911-ten-years-on-there-are-no-excuses-for-buying-the-myth/

There is a mountainous wealth of information and evidence, accessible online, that will answer your objective, honest, and scientific questions relating to 9/11, as well as the 7/7 London false flag.

Conclusion: Atheists, put your money where your mouth is – drop ALL dogma and don’t be a weapon of war

What we need to realise as thinking people is this: the ‘Muslim terrorist’ meme serves a deeply nefarious purpose in our mass media and popular culture. Through the fraud of the War on Terror – which subsists on the omnipresent ‘Muslim terrorist’ meme – at least four nations have been attacked and well over 1 million people have been killed. The numbers maimed, orphaned, displaced, and otherwise consigned to a life of perpetual misery completely dwarf this very conservative estimate.

Yes ‘Muslim’ terrorists and extremists exist, but it is wrong to characterise a miniscule minority as being representative of the wider group.

And let us be honest: there are far more non-Muslim terrorists than Muslim ones, and the piles of skeletons in Iraq, Afghanistan, Libya, and Syria attest to this.

As free people we should be free to discuss anything we like in an open forum, including criticising any religious beliefs. People should be free to criticise any and all ideas and beliefs, including Islam, but this should be done in a principled and well-researched manner that does not feed into destructive, warmongering, and false dogma.

And how absurd is it for a person to stand on a soapbox, bashing Islam because of its followers’ supposed moral failings, while diligently spreading a far more deadly and dangerous dogma that has directly resulted in the death and misery of millions? I call for all decent atheists to put their money where their mouth is and reject ALL dogma, and this includes the naked lie of 9/11.

If a central tenet of atheism is resisting dogma and employing critical thought, then by measure of its adherents, New Atheism is failing pitifully.

P.S. It is incredibly telling that the anti-stoning petition posted by Richard Dawkins on his Twitter feed, comes from Avaaz – an empire propaganda mill that seeks to demonise Muslim nations in order to make anti-Muslim wars of aggression more palatable.