Salute to Syria first, everything, that is what Syria’s worth, because it is the front line of the battle/Bless to the Syrian Arab Army, eat rebels at lunchtime, we’re with you as you crush lies into gravel/Bless to Mugabe, and Zimbabwe, we know you got that heavy revolutionary thunder, it is clear/To Kim Jong-un and the Democratic People’s Republic of Korea/Struggle with no fear to defeat the disgrace in the South/Their plunder is severe but we know that you make them shake in amazement and doubt/We are with you ‘till Korea is whole again, and all the Empire’s bases are out/United Snakes of Israhell, what, you don’t see these cavaliers looting?/Traitors, you support their accursedness, me? I implore the alternative, I ain’t here for blunder brother, my solidarity, is with Mother Russia under Vladimir Putin/Smashed up the Zionist oligarchs, if they remained, things would’ve gotten messier/Blasted international spin, after the win, over the Saudi-Israeli plot in Chechnya/ Fought hard for the unity between Muslims and Christians/Only the hypocrite haters have overlooked this position/Shielder of Iran and the shielder of al-Sham/Abu Ali Putin said Russia is the shielder of Islam/Forces of the Christ and the Mahdi united as it was revealed in the Qur’an/

To Hizbullah of Lebanon, defenders of the Levant and descendants of the Twelfth Imam, protector of the valleys and the mountains and the pure shores/Fighters of another caliber, the valor of infinity, the mallet on the enemy’s head, you have astounded all the warlords/ Ana ba7eibbak ya Sayyed Nasrallah, I kiss the very ground that you have walked on/Not another man on this planet is as magnanimous or righteously gargantuan as you, nothing is as bountiful as your Nour/Thinking of Ghaleb Awwali and the other members of the Party who were martyred, their achievements are eternal/Anyone insulting them is vulturous, deserving of the sulphur in the sick fruit, of the Zaqqum Tree in the inferno/To the Bolivarian states, Venezuela, Nicaragua, Bolivia, Ecuador and, of course Cuba/Brazil and Argentina too, Commandate Chavez is more alive than ever so, if you don’t, see it bleeding through then please, buzz off loser/India and Pakistan, your unity is needed bad, this really ain’t no type of mystery/Pakistan, gotta end discrimination, corruption, obliterate the destruction occurring due to drone strike complicity/India, stop your tortuous occupation of Kashmir and your war on the Naxalites/Cut every connect to the Zionist entity, this is for the soul of your nation, it is more than a sacrifice/End the colonial divide and reunify, so you’ll be restored to your classic might, yeah/To FLN Algeria, you still make your enemies wanna crawl into the roughest hedges/Your victory over the French will always be the stuff of legends/Iran, you are the example and the magnetic north we follow, after your revolution swallowed the Shah, and his evil was rendered mute/Not a day goes by Ayatollah Sayyed Ruhollah Khomeini that, we don’t remember you/We pray that the whole entire Ummah will scope and learn from your gifts/He who gave the life to Resistance, a beaming blaze of light who overturned the abyss/“Arab Spring” undermined our discourse but now we’re leaving it with burns/Solidarity and revolution, we’re giving back all the meaning to the words/Palestine compass, defeat the beast at the peak then we’ll reach for liberation triumphant, that is where the vibrant prism lies/And so we will struggle until Zionism dies/ 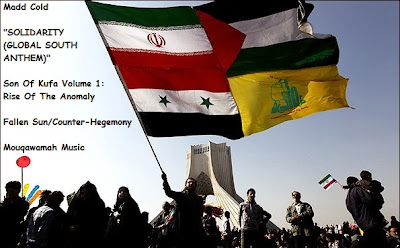