To Falasteen, you are my heart, my mind, my body, my soul/We will not stop our fight ‘till your body is whole/Lifta to Al-Jalil, Al-Quds to Gaza City/Long live the Resistance, steadfast, leaving the Zionists’ heads smashed, there is no time to harbor pity/These demons are aggressive and evil is their essence, they are pharaonic rulers modernized and/Worshipers of Satan, they are murderers and racists, the cruelest lot of liars/Falasteen has seen 131 years of Jewish colonizing/Not to mention 65 years it’s been occupied, land has been toxified, massacres by savages, ravaging, madd dead/Nakba, Naksa, all the way to Cast Lead/Ramla, Dueima, Deir Yassin/Kufr Qassem, Khan Younis and Jenin/All were brutally assaulted by this goddamn regime/But the Palestinian people left oblivion vetoed ‘cause you are still there/White phosphorus bombs boom and spill tears/Globally, Zionist Lobby goons instill fear/So much culture vultured, look at what the Jews have killed here/This is genocide, what they do is real clear/That is why we pray to see the usurping Jewish entity’s destiny end/ With the return of every single Palestinian and Lebanese refugee ethnically cleansed/

Death to Israel, say it loudly!

Death to Israel, say it proudly!

Fuck your peace and coexistence!

I would rather die than live with no resistance!

Death to Israel, say it with me!

Death to Israel, pray it with me now!

Free Falasteen is the only answer!

Death to Israel, cure the cancer!

Nearly 200 more martyrs with Operation Pillar of Cloud/Chemical weapons, women, kids and men are infected, they are not spilling your blood in silence though, they are spilling it loud/Arrogant dogs and magniloquent hounds/Throw these intruders in the wilderness now/No, no say the foes but with stones and Fajr-5 Rockets, motherfuck the Iron Dome, we will bleed for your nation/Like Iran, Syria and Hizbullah, we will struggle with you ‘till complete liberation/Haifa, Yaffa, Lydd, Isdud, Majdal, let the chills hit your knees so they quiver/Free Falasteen from the Sea to the River/From every dunam of land Israeli footprints are gone, every library has their booklists restored and all are posh/Word to Fathi Shaqaqi and George Habash/Ahmad Jaabari, Kamal Nasser and Dalal Mughrabi and, every other fighter who was murdered for this cause of dignity/Quicksand existence, fabricated is the only way to define this awful entity/Death to Israel, that is the mission, yes/Then we’re gonna hit the Rothschilds’ capitalism next/ 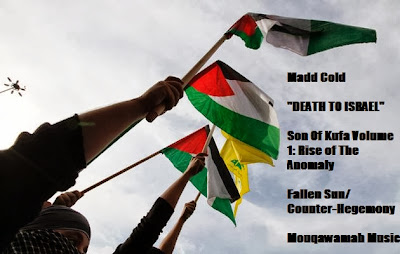