Pig, bacon or pork, you can take your pick/Hood kids shake and they cough when you pace in whips/’Cause they know another Amadou Diallo could happen again at any second/They’re scared to become another Sean Bell, hell, they’re already prepping/Parents ain’t avid believers in justice ‘cause of Abner Louima, disgusted, they are steady stressing/7 years old, you murdered Ayana Jones with your heavy weapons/Tears drop where Timothy Stansbury’s resting/Beat Jordan Miles to within an inch of his life/Fouad Kaady was hardly alive when you shot him, but he wasn’t innocent, right?/This here’s to revolt, not to dance/So bust a motherfucking shot in the toxic air/For Oscar Grant/And rock this at the precinct so every dirty cop can hear/

Salaam London, go ahead, organize, spit or just speak/This is for my UK fam that stands up to the British police/They are wily and slimy vultures/We damn them to hell for the brutal killing of Smiley Culture/Don’t lie and say that you didn’t start nothing/We know that you pigs murdered Mark Duggan/No justice for Harry Stanley, I mean the scheme’s ridiculous/Rich running the show and at the top you got the Rothschild clan and Queen Elizabeth/Same ones that fund imperialism and every bit of its indiscriminate slaughter/No justice for Sean Rigg or Christopher Alder/Treated subhuman if you’re Asian or Black or Irish/So fuck the Brit pork, let us repay them with massive riots/

Police repression is globalized by the tear gas of CSI yo, what they do is crazy/Founded in 1981 by Jacob Kravel and Michael Brunn, two Israelis/Putrid ADL brainwashing US cops to fight the hatred of Jews/In other words, any criticism of Zionism will have you locked up for anti-Semitism and facing your doom/Welcome to Israelification, it’s crude with all top police chiefs flown to Tel Aviv/Sold embellished dreams of the Holocaust fraud, it’s the same broken record with the grossest melody/Shin Bet and the Mossad yo, run the bacon in New York, LA and Chicago, their homicide is rampant/Pigs and their masters, we have to smash them, before they colonize the planet/ 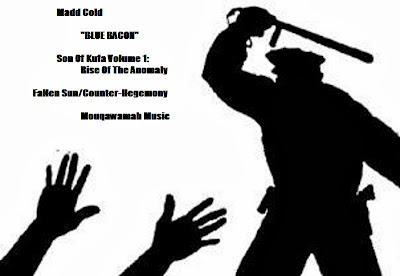