Henrique Capriles Radonski – leader of the Venezuelan opposition – vows to downgrade ties with Iran and cut subsidised oil to Cuba and Nicaragua, should he get into power. What is more, his coalition has links to Israel, and both of his parents are Jewish, though he claims to be a ‘fervent Catholic’.

At a rally in June 2010, much to the disdain of the American Jewish Committee which dismissed the accusations as ‘baseless’,(1) Venezuelan President Hugo Chavez publicly stated that Israel is funding the Venezuelan opposition:

An inspection of the profile of Henrique Capriles Radonski – leader of the Venezuelan opposition – not only elicits deep suspicion, but in fact completely validates the claims made by Chavez.

Firstly, Radonski is the youngest Venezuelan MP ever elected – being elected as an MP at age 26. After entering politics at the age of 25, he became Venezuela’s youngest ever deputy in Congress, and was subsequently chosen to be Vice President of the House. Secondly, he has enjoyed a ‘meteoric rise through the political ranks‘, in the BBC’s wording,(2) insofar as he has held a number of posts, and has not lost a single election.

In September 2012 the UK Telegraph accompanied Radonski on the campaign trail, wherein he stated(3) what he would do on his ‘first day in office‘. Not only does he signify his intention to downgrade Venezuela’s diplomatic relations with Iran, but he also intends to end subsidised oil to Cuba and Nicaragua – something which would please the United States Government to no end.

“On his first day in office, he said, he would halt the “gifts” of free or heavily-subsidised oil to Mr Chavez’s left-wing ideological allies in Cuba and Nicaragua.”

Radonski informed the Telegraph that the “cosy relationship with Iran would end“, because “Venezuela needs good relations with countries that have democracy and respect human rights“.

“The expropriations were a big mistake, the whole policy has been a fiasco,”…”Nothing works now. Venezuela has 30 million hectares of fertile land but we only use less than 10 per cent of it and we now import 80 per cent of our food, including rice from the so-called US ‘imperialists’.”

He promised to review each such case of land redistribution with a view to returning the land to its former wealthy foreign owners. This includes Chavez’s seizure of estates from the Vestey Group, which is a ranching and sugar cane company headed by Lord Vestey, one of Britain’s richest men.

In the May 18th 2012 edition of Venezuelan paper ‘Correo Del Orinoco‘ it was reported(4) that, at a EU meeting on Latin American affairs, the German government asked EU countries to step up their support of the MUD (‘Democratic Unity Roundtable’) coalition (the Venezuelan opposition coalition now headed by Henrique Capriles Radonski).

While German government representatives called for such support not to be hidden from the public, Portugal and France called for a more secretive approach. In addition, the report mentions the direct financial support that the Venezuelan opposition enjoys from not only USAID, but also the Zionist and anti-democratic ‘National Endowment for Democracy’. 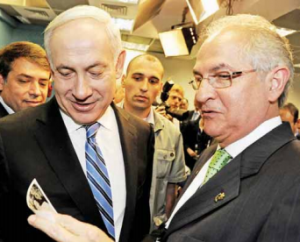 Even more revealing is the fact that, on the weekend prior to the 18th May 2012 publication, Venezuelan opposition lawyer and politician Antonio Ledezma secretly flew to Israel – a country which Venezuela has severed diplomatic ties with – on Venezuelan taxpayer money, to meet with Israeli Prime Minister Benjamin Netanyahu and Foreign Minister Avigdor Lieberman on a three-day visit.

During Ledezma’s private, unannounced trip to Israel paid for with public Venezuelan money, he promised to re-establish ties with the usurping Zionist entity if the Jewish settler state would fund and back Henrique Capriles Radonski. Ledezma told reporters that he spoke to Netanyahu and Lieberman about,

“our (the opposition) disposition to reestablish relations with the State of Israel under a new government presided by Henrique Capriles Radonski”…“In contrast to the current political policy in Venezuela, Capriles will re-establish our historical ties”

Radonski, a man who feels Venezuela must only have relations with “countries that have democracy and respect human rights“, shows his duplicity as he reaches out to the Zionist entity – a routine human rights abuser which constitutes a Jewish ethnocracy on stolen Palestinian land.

The aforementioned BBC article deceptively refers to Radonski merely as ‘Henrique Capriles’ – choosing to omit his blatantly Jewish surname. Later in the article there is an allusion to his Jewish background; the BBC report casually states that, ‘His maternal grandparents were Jews‘. Well, as far as ‘Israel’ is concerned, that would make his mother a Jew, which makes him a Jew.

Though Radonski is ostensibly a ‘fervent Catholic’,(5) both of his parents are of Jewish descent. Make of that what you will, but considering his stated willingness to isolate Iran and his opposition coalition’s established relationship with the Zionist entity, this is perhaps a fact worth bearing in mind.

Venezuela enjoys excellent relations with Iran. Furthermore, Hugo Chavez severed ties with Israel after the Zionist state’s murderous assault on Gaza in 2008-2009. At the time, the Venezuelan Foreign Ministry stated, “Israel has repeatedly ignored the calls of the United Nations, consistently and shamelessly violating the resolutions approved by overwhelming majorities of member countries, increasingly placing itself on the margin of international law…Israel’s state terrorism has cost the lives of the most vulnerable and innocent: children, women, and the elderly“. If Radonski – Israel’s man in Venezuela – takes the next election, that is all bound to change. Thankfully, with pro-Bolivarian million man marches(6) taking place in the streets in the wake of Hugo Chavez’s absence, along with Chavez’s party crushing the opposition in the recent gubernatorial elections,(7) such a scenario is highly unlikely.