‘Activism’ and ‘human rights’ foundation Avaaz blames the Houla massacre on Assad and calls for foreign intervention. A peek into the background of Avaaz explains its pro-empire position, and who is really behind it.

The ultra-shadowy Avaaz Foundation is purportedly a non-governmental organisation that seeks to(1) “close the gap between the world we have and the world most people everywhere want.”

A mere three days after the Houla Massacre in Syria, while all parties were clamouring to figure out what had happened and who was responsible, Avaaz took the opportunity to speculatively blame the Assad government as part of an online petition campaign. What is even more disconcerting is that this ‘human rights’ organisation also made a thinly-veiled call for foreign intervention – something which would undoubtedly result in astronomical human suffering.

Dozens of children lie covered with blood, their faces show the fear they felt before death, and their innocent lifeless bodies reveal an unspeakable massacre. These children were slaughtered by men under strict orders to sow terror. Yet all the diplomats have come up with so far is a few UN monitors ‘observing’ the violence. Now, governments across the world are expelling Syrian ambassadors, but unless we demand strong action on the ground, they will settle for these diplomatic half-measures.

This is immediately followed by a thinly-veiled call for an invasion of Syria by foreign powers:

The UN is discussing what to do right now. If there were a large international presence across Syria with a mandate to protect civilians, we could prevent the massacres while leaders engage in political efforts to resolve the conflict. I cannot see more images like these without shouting from the rooftops. But to stop the violence, it is going to take all of us, with one voice, demanding protection for these kids and their families. Sign the urgent petition on the right to call for UN action now and share this campaign with everyone.

The background of Avaaz sheds light on its unequivocal pro-war and anti-Syrian position.

Avaaz’s latest 990 form,(3) from 2010, raises a number of questions. Avaaz has only 16 employees, and is listed as a ‘corporation’ for the purposes of the 990 submission. Oddly, for an organisation that receives no governmental or corporate funding,(1) Avaaz received over $6.7 million in 2010, and paid its President over $180,000 as a salary (still feel good about donating?). On top of this, in 2010 Avaaz gave Res Publica (more on them later) a $100,000 grant. Avaaz is doing extremely well considering this and the fact that it was established relatively recently, in 2006. Where is all of this money coming from?

Avaaz is “incorporated as a non-profit 501(c)4 organization in the state of Delaware, USA“.(4) The foundation’s office is based in Manhattan, at 857 Broadway – the same address as Res Publica(5) – an entity which co-founded Avaaz along with Ricken Patel.

The background of Res Publica offers a glimpse into the nature of Avaaz. 24 Hours for Darfur and Darfurian Voices (using the same etymology of “Avaaz”, which means “voice” in Farsi and several middle eastern dialects) are two projects of Res Publica. These projects(5) are aimed at drawing international attention to Darfur – with a view to demonising and vilifying the Arab government of Sudan:

This is part and parcel of a long-standing Israeli policy to split Sudan along ethnic, racial, and religious lines.

The Israelis have been dug into Sudan like ticks ever since the 1950’s,(6) fomenting conflict and orchestrating the secession of South Sudan – effecting the policy of separation of all sovereign (especially Arab) states along ethnic lines.

The funders and partners of Darfurian Voices, 24 Hours for Darfur, and Res Publica are incredibly revealing, and constitute a who’s who of Zionist, globalist, pro-empire organisations and bodies, even including the US State Department.(5) 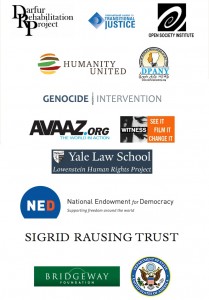 One such partner, Genocide Intervention, boasts amongst its Board Rabbi Steve Gutow, President and Chief Executive Officer of the Jewish Council for Public Affairs who insists that the government should “support Israel”.(7) Gutow was also the founding regional director of AIPAC’s Southwest Region, and was the founding executive director of the National Jewish Democratic Council.

Another Board member is Ruth Messinger – president of American Jewish World Service, and member of Barack Obama’s Task Force on Global Poverty and Development.

Sitting alongside Gutow and Messinger is Joan Platt, who also serves on the board of Human Rights Watch – a prolific propaganda mill that has underpinned the NATO narrative of the wars on Libya and Syria. Human Rights Watch was also funded by Zionist heavyweight George Soros who contributed $100 million in 2010.(8)

The Zionist ‘democracy promotion’ outfit known as the National Endowment for Democracy – which has been linked to the fraudulent atrocity reports disseminated against Muammar Gaddafi(9) – is also listed as a partner, as is the US State Deparment. No further comment should be necessary.

The Chair of the ICG, Thomas R Pickering, is Former U.S. Ambassador to the UN, Russia, India, Israel, Jordan, El Salvador and Nigeria, and Vice Chairman of Hills & Company.

The President & CEO of the ICG is Louise Arbour – Former UN High Commissioner for Human Rights and Chief Prosecutor for the International Criminal Tribunals for the former Yugoslavia and Rwanda.

What do these people have to do with the prevention of crises? The answer is nothing, absolutely nothing. The ICG is a body that exists to further the aims of its benefactors, which notably include NATO, the United States Government, and Israel.

Res Publica’s ‘About Us’ page also reveals(10) that Patel has consulted for the Rockefeller Foundation and the UN.

Akin to the ICG, Res Publica’s advisory board(13) features financiers, economists, and a former Clinton Chief of Staff.

The fraudulent ‘humanitarian intervention’ concept is built upon atrocious lies and emotive propaganda peddled by these networks of closely interconnected ‘human rights’, ‘democracy promotion’, and ‘crisis prevention’ groups. Before having an emotional knee-jerk reaction to these issues, we must inspect the people behind these voices. Avaaz’s recent petition feverishly entitled “Protect Syria’s Children Now!” currently has over 780,000 signatures. Orwellian ‘human rights’ outfits such as Avaaz have become adept at manipulating well-meaning activists and liberals into supporting the very agenda they purport to oppose – placing them firmly in the same camp as the most virulent Zionists, Neoconservatives, and war hawks one can imagine. This makes the illusory nature of the left-right dichotomy clearer than ever before, but even more worryingly it expedites the march of the NATO-GCC-Israeli war machine that now has Syria in its crosshairs.

(12) Crisisgroup.org – ‘Crisis Group’s Board of Trustees’